The Church of St Bartholomew 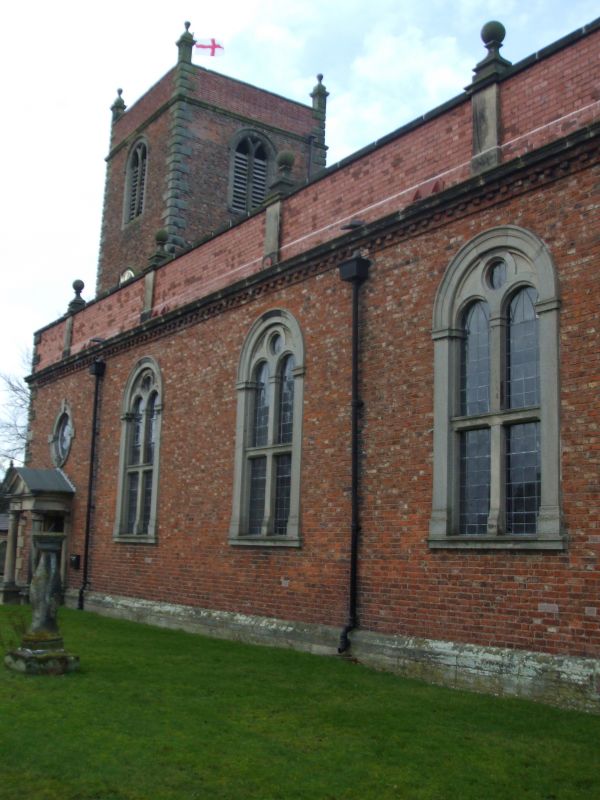 Parish Church 1702 (in blue bricks on tower), restored in 1861. Brown
brick and stone dressing with slate and lead roof. 3-bay nave with
choir, shallow apsidal chancel and square west tower, in classical
style. The tower has a projecting ogee moulded stone plinth and stone
quoins. West facing tower windows are semi-circular arched with
keystones and moulded architraves, mullions and Venetian tracery at
the lower levels. There is a projecting band at nave roof level and
above the south facing clock dial is balanced by stained glass
bull's eyes in the other faces of the tower. The louvred openings at
bell stage have "Y" tracery and hood moulds. There is an ogee
cornice, red brick solid parapet and square corner ball topped
finials. The nave (south) entrance is a 6-panel, oak, bolection
moulded door in a stone dressed porch, with pediment supported on
Tuscan columns and pilasters. There is a 4-keystone bull's eye window
in the wall above the porch. The nave, choir and chancel have a
moulded stone plinth and quoins, also cross windows, with rounded
heads, surmounted by small bull's eyes under semicircular arches with
springers. There is a brick and stone cornice and a solid red brick
parapet, interrupted by ball topped pilasters over each window. In
the north wall of the nave there is a 6-panel bolection moulded door
in a projecting moulded stone surround with key. There is a
high-quality C17 marble armorial memorial fixed to the east chancel
external wall.
Interior: Two lines of plain circular columns divide the church
throughout its length; these flank the apse and separate the nave from
the side aisles. The apse has mosaic cladding to window cill level
and the ten commandments and prayers in panels flanking the window.
Choir stalls front the altar and face each other across an area of
mosaic paving. A gothic carved oak eagle lectern and pine pulpit face
oak box pews with fielded panels. Three alabaster wall memorials
south wall of choir and two marble war memorials nave south wall. The
choir/nave ceiling is flat with large perimeter mouldings and coves,
and a panelled beam separating the apse. Pine west gallery, off two
posts with curved brackets and three 4-panel-door glazed vestry screen
below.