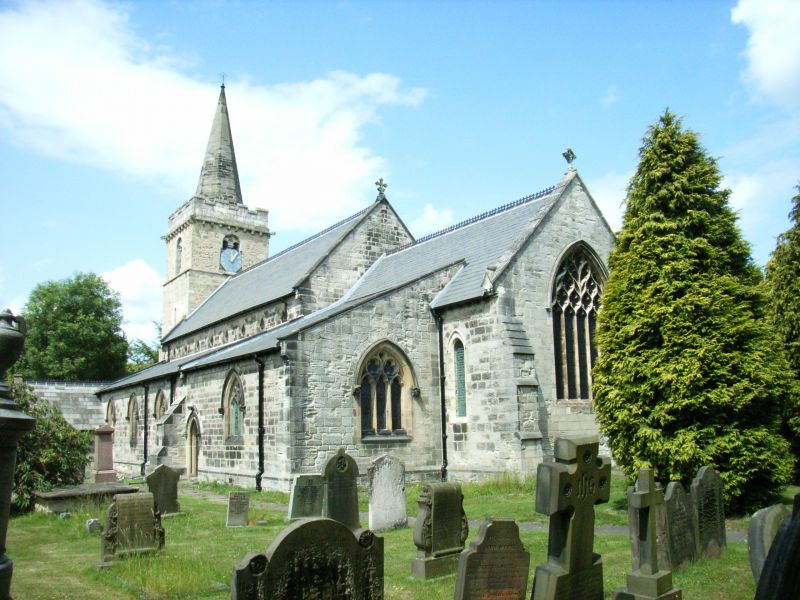 Parish church. 1861 rebuilding of C12 church, retaining a little of the original
masonry and copying the former tower. Squared white sandstone and slate roofs,
tower of magnesian limestone. West tower with short spire, nave with north and
south aisles, porch to south aisle, chancel with south chapel and north vestry.
Mostly simple C13 style. Rectangular three-stage tower has rubble base but is
mostly of squared masonry, has single round-headed lancets to lst and 2nd stages
of south side and at intermediate level of west side, bands to the slightly set-
back upper stages, Norman-style round-headed belfry windows on all sides of the
3rd stage, each of 2 louvred lights divided by a colonette with cushion capital
(east window containing clock face), a corbel table with corner gargoyles, embattled
parapet; and a short octagonal spire. Four-bay nave aisles; prominent gabled
porch to 1st bay of south aisle has 2-centred arched moulded outer and inner
doorways, both under hoodmoulds with figured stops, and a wall sundial over the
outer doorway; aisles have similarly-arched windows with similar hoodmoulds,
all of 2 cinquefoil lights; nave has 8 trefoil clerestory windows. Chapel has
a priest door and a window, like the other openings, and a 3-light east window;
chancel has a large 5-light east window with reticulated tracery. Roofs have
stone gable copings with apex crosses.
Interior: 4-bay arcades of double-chamfered 2-centred arches supported by short
cylindrical columns with annular caps; arch-braced kingpost roof; west gallery
carried by a Gothic-style wooden screen (now glazed); large moulded chancel arch,
the wall above it covered with figurative painting (C20); 2-bay arcade on each
side of chancel, and beyond that on the north side, a Normal lancet (presumably
relocated); 2 large hatchments on south aisle wall.