Church of St Luke and All Saints

A Grade I Listed Building in Darrington, Wakefield 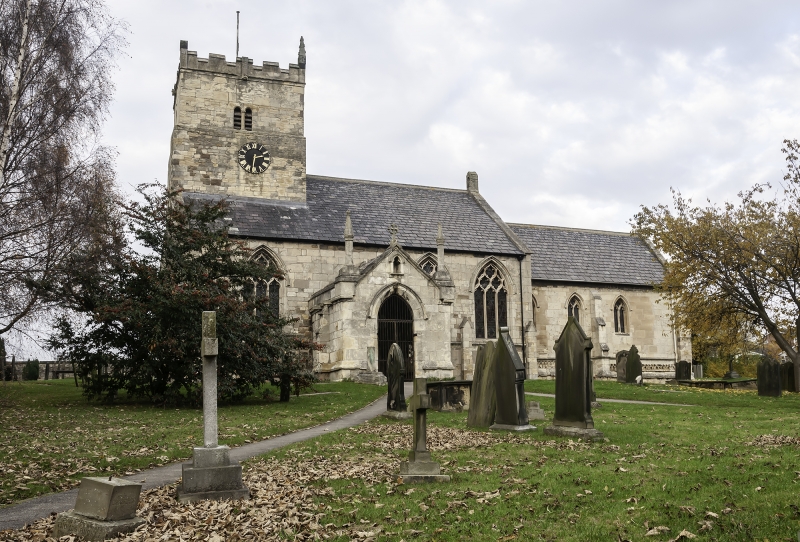 Entry Name: Church of St Luke and All Saints

Church of England Parish: Darrington St Luke and All Saints

DARRINGTON CHURCH LANE
SE42SE
(north end
5/14 Church of St. Luke
11.12.1967 and All Saints
GV I
Parish church. Norman tower, C13 aisles and chancel (altered in C14 and
C15), with C14 north chapel (probably a rebuilding at that time); restored in
1880 by A. W. Blomfield. White magnesian limestone (mostly squared, but some
rubble); slate roofs. Aisled nave embracing west tower, south porch, chancel
with north chapel. The stout, square, 3-stage west tower, embraced by the
aisles up to the 2nd stage, has a moulded 4-centred arched west doorway and a
Perpendicular 3-light window above; at the 2nd stage, the south side has a
clock face and the north side has a small Norman window of 2 round-headed
lights (now glazed) with a colonnette; the 3rd stage, which is set back, has
Norman belfry windows in the south and east sides, each of 2 round-headed
louvred lights with a colonnette, an altered or inserted belfry window of
2 pointed lights in the west side; and an embattled parapet with restored
corner pinnacles. The short nave has full-height aisles embracing the tower,
the roof on the south side being continuous; early features of the aisles
include a small lancet at the west end of both and, in the north aisle,
rubble masonry to half-height, with a blocked round-headed north doorway,
coupled lancets to the east and a single lancet to the west. The 4-bay south
aisle has a gabled porch to the 2nd bay, with a chamfered 2-centred arched
outer doorway, a cusped niche in the apex, kneelers carrying tall slender
pinnacles, an apex cross, and buttressed side walls with low parapets; a
stone roof on 2 transverse arches, and an inner doorway with 3 orders of
shafts and deeply moulded arch. The other bays of this aisle have large C14
arched 3-light windows with reticulated tracery. The upper part of the north
aisle, of squared masonry, has 2 large square-headed recessed windows of 4
and 3 lights with hollow spandrels, and at the east end (above the coupled
lancets) a double-chamfered 2-centred arched window of 2 cusped lights with a
trefoil in the head. The buttressed 2-bay chancel has a low decorated frieze
in each bay (quatrefoils in the 1st and blind arcading the 2nd), a C14
2-centred arched priest door to the 1st bay, two 2-light arched windows in
the 1st bay and one in the 2nd; and a very large 2-centred arched east window
with intersecting tracery and Perpendicular secondary tracery. The north
chapel has a large 2-centred arched east window with moulded surround and
reticulated tracery, a prominent composite buttress to the east corner, a
square 2-stage stair turret to the west corner, and between these a recessed
Perpendicular window of 3 cusped lights.
Interior: round-headed tower arch with substantial demi-shafts carrying
scalloped capitals and small round-headed north doorway, double-chamfered 2-
centred arch to south aisle; 3-bay arcades with tall circular piers and
double-chamfered arches, keeled responds at each end; blocked lancet in north
wall of chancel; very small piscina and aumbry in chancel; rood stair-turret
with unusual small open-arcaded gallery running towards chancel arch; some
traceried Perpendicular bench ends; 4 chancel stalls with misericords;
some C15 stained glass in north chapel. Monuments: two C14 effigies (under
arch in north wall of chancel and in chapel); monument to William Ferrer (d.1684), now damaged; in north aisle, marble wall tablet in memory of "that
Just and Judicious Dealer ... Mr. ALEXANDER BLAIR of Aberdeen in Scotland and
Merchant Taylor of London (d.1671).
(Reference : Pevsner).