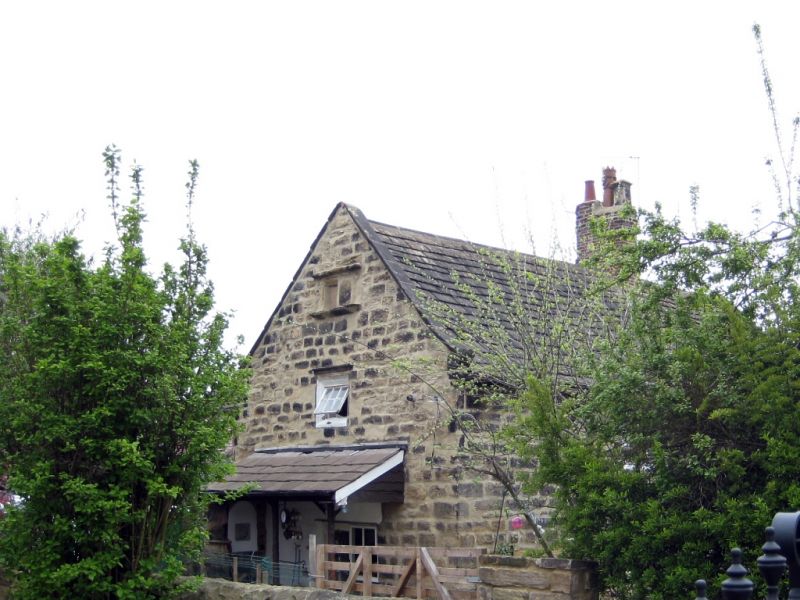 Farmhouse, now house. Probably later C17, with later addition to rear;
altered. Coursed sandstone blocks, stone slate roof, brick chimney. Three-
unit lobby-entry plan. Two storeys plus attic; present openings in
symmetrical relationship but offset to the right: doorway with chamfered
surround at junction of 2nd and 3rd bays (protected by modern wooden porch),
flanked by 2 square windows on each floor, all with plain surrounds and 12-
pane top-hung casements, and those at ground floor with pseudo-shutters; to
the left, 1st bay has remains of blocked window at ground floor. Gable
copings with kneelers, ridge chimney in line with door. Left gable wall has
inserted openings at ground floor (under modern pentice), former 2-light
mullioned windows to 1st floor and attic, the lower lacking the mullion and
the upper blocked, both with straight dripstones and the upper with a raised
chamfered sill (perhaps a pigeon perch). Added rear wing, probably early C19
and apparently formerly 2 cottages, not of special interest.
Interior: chamfered spine beams in 1st and 2nd bays; back-to-back rectangular
fireplaces, that in the housebody formerly furnished with a spit suspended
from a rail still attached to the beam above.