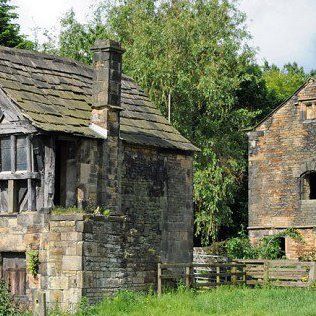 East gable is timbered only from first floor which has heavily jowled posts carrying projecting wall plate with decorative rosette to stop supported on decorated braces. The wall plates carry cambered tie beam which is carved with a flowing vine scroll interspersed with hunting dogs to the upper and vertically carved stag to lower part of the scroll. The tie beam supports a king post truss with four 'V' struts pegged to the principal rafters which carry projecting trenched purlins. Below the tie beam is four-light oriel window with wooden ovolo moulded mullions glazed with thirty six square leaded lights. These are set in a heavy crude sill with mortice to right hand end. This may have been overlaid with decorated rail now perished. The oriel is supported on five coved uprights pegged to close studs which have bulbous crocket. To either side set back from window and gable are decorated close studded walls with offset diagonal studs.

Apex is capped by wooden finial and gable is protected by oversailing slates. The return wall is faced in ashlar to the eaves at the angle and has evidence of first floor doorway (now solid with hammer-dressed stone) to left of which the wall is faced in hammer-dressed stone and has a solid stone stair of fifteen risers. Level with landing is extruded lateral stack in ashlar. Curious weathered course two courses higher than eaves. Next this is only entry to first floor. Doorway has square-headed lintel level with eaves and chamfered opposite jambs.

West gable has stone courses running through to outside of staircase but with straight break higher up. Ground floor is again in large dressed stone and has doorway (the only entry to ground floor) with square lintel notched at the top corners, composite jambs and chamfered surround. Single light window has termination of string course with straight return from adjacent stone block. First floor of west gable is timber-framed forming three vertical divisions. The topmost formed by king post truss with four 'V' struts, the king post having heavily jowled head with exposed ridge tree set square, oversailing slates to gable. Below the tie beam, which has hollow chamfer to its soffit, is long wooden mullioned window of full width. Seven lights with ovolo moulded mullions and twenty one small square leaded lights. One piece undecorated sill. Under and set back is close studded wall with decorative 'V' studs forming alternate pattern of upright and inverted 'V's. Attached to left hand side is stone extension which breaks forward having corner windows with double chamfered mullions of two lights to both floors. Over ground floor window is a string course which continues round building. Over first floor window is hoodmould. Tall lateral stack has weathered course and two diamond set flues. South front of single cell. Coped gables with kneelers. Double chamfered mullioned windows with king mullion of six lights to ground floor and twelve lights with transom to 1st floor with three-light attic window with hoodmould. Another two-storey cell breaks forward from return wall of similar character to a two-storey porch but without doorway. This has a blocked window to ground floor in the south return wall with a four-light double chamfered mullioned window to 1st floor, with same to west gabled front which is coped with kneelers.