A Grade I Listed Building in Wighill, North Yorkshire 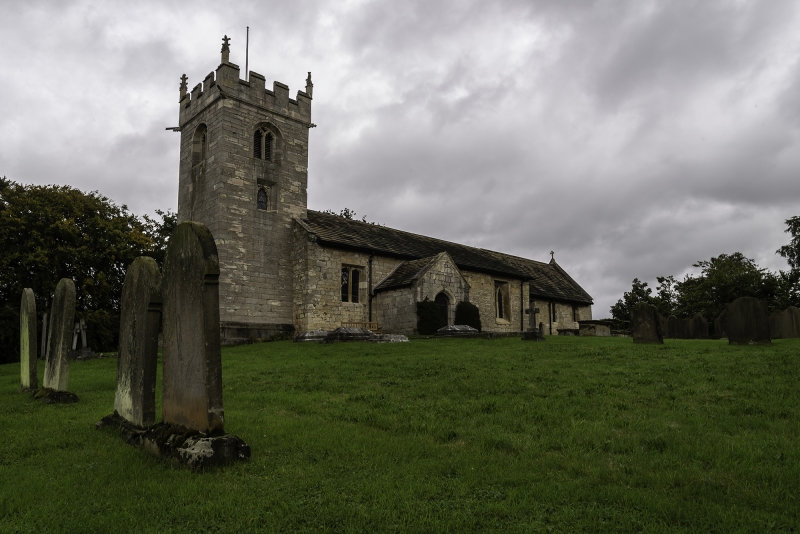 Church. C12, and C15; with C17 fittings, restored 1912 by W H Brierley.
Coursed limestone rubble and ashlar, graduated stone slate roof. Nave of
4 bays with south porch bay 2, north aisle and 3-stage west tower; 3-bay
chancel. C15 tower: plinth; cusped window in deeply chamfered surround to
first stage, south side; each side has a belfry window of 2 cusped lights in
shallow pointed arch; battlemented parapet with finely detailed gargoyles
and crocketed pinnacles. The west window is of 3 cusped lights; north stair
tower. The south porch has a 2-piece lintel to the chamfered outer arch,
the door is of wide planks, the date 1721 deeply cut in it; the flanking
nave windows are paired cambered-arched lights in recessed chamfered square-
headed surrounds; a similar window to chancel bay 1.Square-headed window with trefoil-
headed paired lights to nave bay 3 and chancel bay 3. A narrow shouldered
arch to chancel door between bays 1 and 2, and tall single-light window to
right. Decorated 3-light east window. Stone copings to gables. The nave
north doorway has a narrow moulded pointed arch; the nave and chancel north
windows are similar to those on the south. Interior porch: 2 arch-braced
trusses with shield bosses; the C12 nave doorway is exceptionally fine, with
2 orders of colonnettes; capitals carved with scenes from the crucifixion
and with foliage; the round arch has 4 orders, from the outside: zigzag,
beakhead, pictorial scenes and a roll moulding. The pictorial scenes are
well preserved and include masks, human and animal figures, some fighting.
The left colonnette is carved with dates and initials of the C17 and C18,
the date 1672 appears twice. Nave: north arcade of 4 double-chamfered round
arches on short quatrefoil piers; the roll mouldings and plain capitals
appear to have been retooled. The chancel arch cut back, probably in 1912
when the chancel was reroofed and the nave considerably restored - a few old
timbers remain in the arch-braced roof trusses. The chancel south wall has
a section with 3 ogee arches, a piscina with restored bowl and remains of an
aumbry. Octagonal font near the north door; the low chancel screen and
altar rail have re-set late C17 balusters. The pulpit is C17 with bands of
blind arcading to the panels. The nave walls are lined with panelling said
to be from box-pews; the fielded panels on the south wall date from the C18;
those on the north wall are C17. 6 rows of pews are probably C15 - the
bench ends with crudely carved poppy-heads, some with punched decoration;
the backs are also original. Remaining woodwork dates from 1912.
Memorials: in the west end of the north aisle a very fine marble chest tomb
to Robert Stapylton, d1634. He is in full armour and has his feet on a
Turk's head, his family crest. The chest has black Ionic colonnettes and
6 kneeling figures of his children. The tomb is railed off with thick
wrought-iron railings set into the stonework; it was removed from the north
side of the chancel (now the vestry) in 1912 and appears to have been
altered; the north side of the tomb chest is crudely sealed over with
rendering and there are several pieces of carved stone of varying dates in
the railed-off area. On the south wall of the chancel is a marble tablet to
Henry Stapylton (1779) by J Fisher of York, with an urn with ramshead and a
painted coat of arms. Below this, on the floor of the chancel, is a large
C14 indent which contained figures of a knight in armour and his wife with a
border inscription and shields. In the south wall there is a fragment of a
C10 cross with interlace carvings. 3 boards, painted with the royal arms of
George III and funeral hatchments of the Stapleton family hang on the west
and north walls.