Church of Christ the Consoler, with Eleanor Cross to East

A Grade I Listed Building in Newby with Mulwith, North Yorkshire 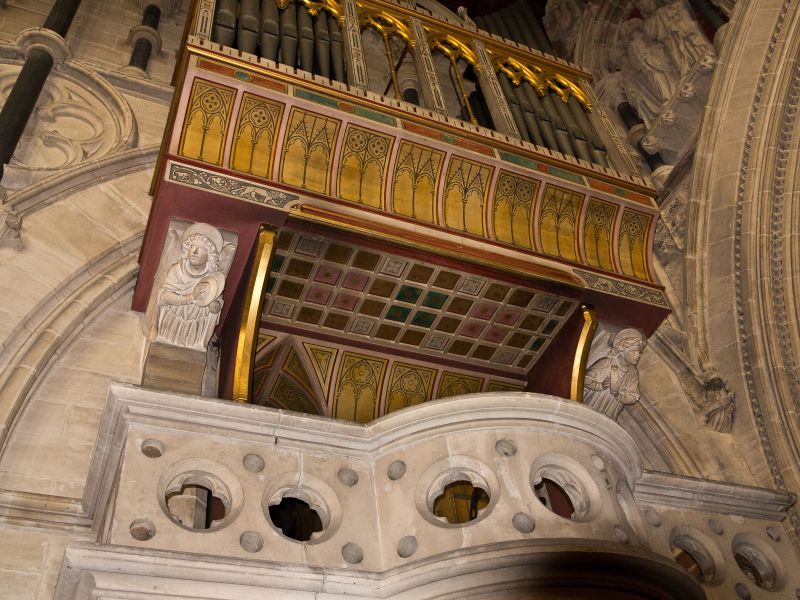 Entry Name: Church of Christ the Consoler, with Eleanor Cross to East

Church and cross to east. 1871-76 by William Burges for Lady Mary Vyner,
early C20 cross. Church: grey Catraig stone, with Morcar stone from nearby
Markenfield Hall for the exterior facings and mouldings, white limestone
from Lord Ripon's quarries near Studley Royal for the interior; grey slate
roof. Cross of grey limestone. Nave of 4 bays with north and south aisles,
south porch, partly enclosed massive tower with spire on north side, square
3-bay chancel with priest's door, left of centre. In an early English style
of c1270, with French detailing. Porch: richly moulded outer doorway with
foliate order below continuous hoodmould; carving of the Good Shepherd in
stepped niche in the gable. Stone copings with ridge cross. Within the
porch: 2 female heads - left crowned head representing the Christian Church;
right blindfolded head representing the synagogue. Inner board door with
elaborate wrought scrolled ironwork and hinges. Paired trefoil-headed
lancets to aisles, triple lancet clerestory windows with quatrefoil tracery
to nave, all with banded attached columns. Chancel: paired trefoil-headed
lancets as aisle under cusped quatrefoils, and in elaborate pointed arches.
Stepped buttresses to aisles and chancel, pilaster buttresses to cleretory.
Tower on north side of 4 stages has angle buttresses and corner pinnacles to
banded spire with lucarne windows; paired belfry windows to fourth stage
with corbel table above. The chancel east end: wide pointed 5-light window
with central rose; figure of Christ the Consoler in mandola to gable. The
window is flanked by 2 massive buttresses surmounted by helmeted animals.
Buttresses with the armorial bearings of families connected with the Vyners
on the north and south sides of the chancel. West end: huge rose window
with 4 sculptures on the outer circle, representing the 4 Ages of Man, blind
trefoiled arcade below. Stone copings to gables. Interior: extravagant use
of coloured marbles throughout; the nave has 4-bay arcades of moulded
pointed arches on quatrefoil columns with attached black marble shafts of
which the inner ones rise to roof level, black marble shafts terminating in
sculptured corbels representing 6 stages in the ageing of man from infancy
to old age. The corbels carry the tie beam of a king-post type roof, with
barrel vault above. The aisle walls have a trefoiled arcade along the
entire length, also with black marble shafts. Above the chancel arch a
dramatic sculpture by Nichol of the Ascension; the arch has clustered
columns and soffit is deeply moulded with carving of angels on Jacob's
Ladder. Chancel has ribbed limestone vault carried by shafts of red, green
and black marble, with carved bosses. The low screen is of white marble,
with panels of porphyry, mosaic and alabaster, the double gates of brass,
elaborately scrolled, with flowers and leaves. The chancel has an inner
tracery, of cusped lights with cinquefoils; the east window inner arch has
angels holding censers carved in the spandrels. The base of the tower
houses the vestry through which the red and white marble pulpit is reached.
The organ loft and chamber is over the vestry and overhangs the nave set on
large corbel sculptured with foliage and grotesque animals in relief.
Fittings: Norman-style font at the south-west end of the nave, of Tennessee
marble with short columns, inscription to the daughter of Lord Ripon, and
open crocketed oak cover containing painted figures of Christ and John the
Baptist. The pulpit and organ are part of the structure of the tower; the
altar reredos is of stone, inset with alabaster and mosaic medallions carved
with figures of the Madonna and Child with Magus, and the prophets. The
stained glass, by Weekes and Saunders, provides a band of decoration to the
unpainted interior. The blind arcade below the west window, with family
memorial plaques below, has an inscription in Gothic letters: "There is one
God and one mediator between God and Man, the man Jesus Christ who gave
himself a ransom for all". The inscription provides the inspiration for the
dedication of the church which was built in memory of Lady Mary Vyners
youngest son, Frederick. He was travelling in Greece in April 1870 when his
party was captured by Brigands. A ransom of £32,000 was demanded, but
before the money was delivered Greek soldiers opened fire and 4 members of
the British party were shot. Using either her contribution to the ransom
money, or compensation from the Greek Government, Frederick's mother decided
to build a church near to her home at Newby Hall (qv) as a memorial.
Frederick's sister had married Lord Ripon of Studley Royal, and she also
built a memorial church, All Saints, also by Burges. The Eleanor cross is
linked to the east end by moulded stone curbs inscribed to the memory of
Eleanor Vyner (d1913) and Robert Vyner (d1915). It has 5 stages with
figures in recesses to stage 2 and a short spire. J Mordaunt Crook,
'William Burges and the High Victorian Dream', 1981, p 229.