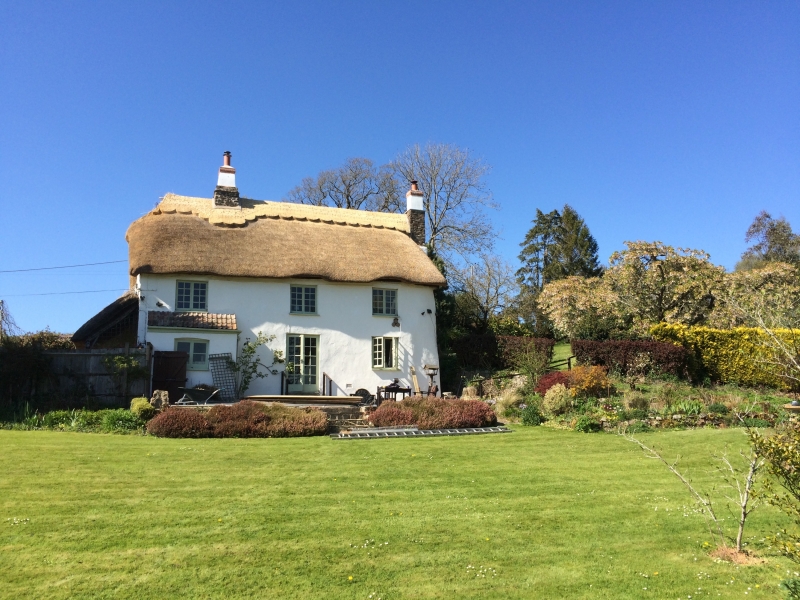 House. Probably early C16, extended and remodelled in C17, with cottage ornee
additions in C19. Rendered stone and cob, rebuilt at right gable end of thatch
roof and axial stone stack backing onto former through-passage at left end. Former
open hall house, with hall and inner room to right of through-passage, now with
window inserted in blocked front through-passage doorway. Probably in early C17
the hall was floored over and a right-angled 2-storey extension added to rear right
end forming overall L-shaped plan. In C19 a narrow gabled 2-storey porch was added
to the east side of this rear extension, and the lower end of the house apparently
demolished, with heavy buttressing to the end wall of the through-passage beneath a
cottage ornee thatched verandah, the main entry being resited to this left gable
end. 2 storeys. 3 window range of 2-light casements, 8 panes per light. Small
pantiled lean-to to blocked through-passage doorway to left and 2-light casement, 8
panes per light to right of French windows.
Interior: scratch-moulded joists to narrow hall, large stop-chamfered beam to rear
extension with original joists. Much of the old joinery survives to the upstairs
rooms, including scroll-stopped durns to chamber doorway over through-passage.
Roof structure largely intact with solid cob partition between hall and inner room
rising to apex of roof and dividing roofs space into 2 parts. Close to the
inserted axial stack is a raised cruck truss with only one of the feet visible.
Heavy smoke blackening to rafters, thatch, purlins and truss extends to lower end
of through-passage. The cob partition and gable end wall carry the purlins over
the inner room, where the roof timbers are clean. Single raised cruck truss to C17
extension butting onto the inner room end, with lap-joined collar trenched purlins
and rafters intact, again no sign of smoke-blackening.