Church of St. Thomas a Becket

A Grade I Listed Building in Greatford, Lincolnshire 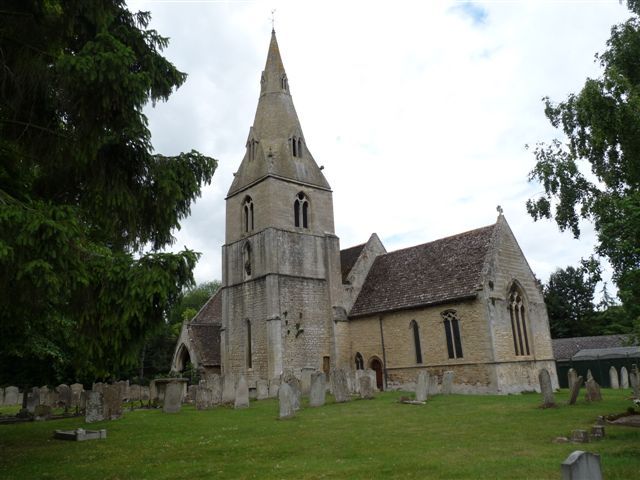 Parish church. Cll, early and late C13, C14, C17, restored
c.1854. Coursed limestone rubble with ashlar quoins and
dressings. Collyweston slate roof with stone coped gables.
Nave, chancel, south porch and tower, north chapel, vestry. In
the west wall a single C13 lancet. The north wall has runs of
herringbone work, together with a blocked single splayed round
headed window suggesting a Cll date. Also a blocked C13 pointed
doorway and a C19 2 light window. The north chapel is in banded
limestone and in the west wall is a C19 Tudor arched doorway. In
the north wall is a large 4 light transomed window of C14, with
reticulated tracery to the head. In the north wall of the
chancel are 2 C13 lancets and in the vestry is a pair of trefoil
headed lights. In the chancel east end is a 3 light C14
reticulated window. In the south wall is a lancet and 2 two
light reticulated windows, one set low down with a transom, next
to a C13 pointed doorway. Late C13 3 stage tower with clasping
buttresses and broach spire with 2 tiers of lucarnes. To the
belfry stage are paired lancets with circles in the tympana. In
the east wall a blocked doorway with C19 ogee head. On the south
side are single lancets to the lower stages, the upper light with
shafted reveals and annular capitals. In the south wall in the
blocking of the arch is a C17 mullioned and transomed window with
pointed head. Early C14 gabled south porch with set back
buttresses. Double chamfered outer arch with triple shafted
reveals, foliate capitals and moulded hood with human head stops.
Side benches and pair of Y traceried lights to the east. The C13
inner doorway resembles the outer but has annular capitals with
hobnails. Beyond the porch is a late C13 2 light window with
cusped heads to the lights, a quatrefoil over and moulded hood.
Interior. On the north side of the nave an early C13 triple
chamfered arch with octagonal responds and capitals. On the
south side 2 similar arches one opening into the tower, one now
blank. Collared nave roof with common rafters with diagonal
braces to the collars. In the north chapel is a pierced stone
screen of 2 lights with moulded lintel and cambered arch over. In
the cill is a stone bearing a relief carving of a circle with 6
oak leaves about a central hole, reputedly a piscina or offertory
basin. In the north wall is a late C13 moulded pointed arched
tomb recess. In the tower chamber is a C14 ogee headed door to
the rood loft. Early C13 triple chamfered chancel arch with
triple shafted engaged reveals and annular capitals with
hobnails. In the chancel south wall a C14 sedilia with ball
flowers to the carved cornice and beyond a C13 piscina with
cusped head and dogtoothed hood. In the north wall is a
triangular aumbry. C19 carved stone reredos with terracotta
floral tiles beneath the string course to each side. Stained
glass of 1898. Fittings. Chancel wooden screen of 1913. All
other fittings are C19 including the octagonal font. Monuments.
In the tower chamber a large C15 stone slab with engraved cross
fleury and margin inscription. In the north chapel are 2 Carrera
marble wall plaques by Nollekens with grey marble obelisks, one
to Rev. Dr.Francis Willis of Greatford Hall, d.1807, with bust,
books and inscription recording the curing of George III lunacy,
the other to Mary Willis d.1797 with a draped urn. On the north
wall is a further monument by M. C. Wyatt to Francis Willis,
d.1831, in the form of a double aedicule with pediment and draped
upper inscription panel. On the west wall a tablet to John
Willis M.D. of Shillingthorpe Hall, d.1835, by T. Gaffin of
London, a sarcophagus with panel showing deceased at rest,
tended by angels. Nearby a small plaque to Mary, Countess
Dowager of Pomfret, d.1839, a draped fluted urn. In the chancel
a wall plaque to Petrus Lafargue, Clerk, d.1804, rectangular
panel surmounted by an urn. In the south porch a large square
panel with bolection surround to Robert Bonner d.1661, and a
shield shaped plaque to his wife Elizabeth d.1709, with foliage
and cherub.