Jesus Hospital, Including Chaplain's House, the Almshouses and the Chapel

A Grade I Listed Building in Bray, Windsor and Maidenhead 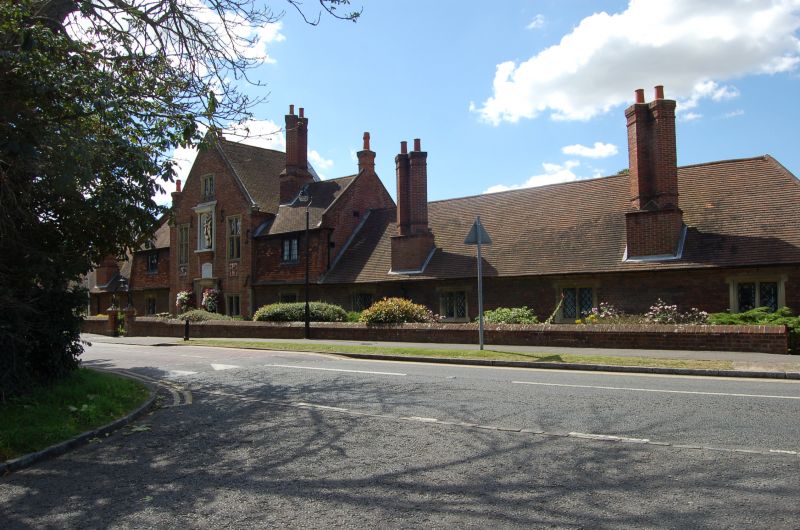 Entry Name: Jesus Hospital, Including Chaplain's House, the Almshouses and the Chapel

Almshouses (formerly 40 now 16), Chaplain's house and Chapel. Dated 1627, altered C20. Founded by
William Goddard, and under the care of the Worshipful Company of Fishmongers. Brick, in English
bond, with stone dressings. Large quadrangular plan with chapel in the centre of the west side and
Chaplain's house to the left of the main entrance-way through, which has a meeting room over. One
storey, Chaplain's house is 2 storeys. Almshouses: all one storey. North and south sides of the
quadrangle are identical. Each 5 bays. Chimneys are placed diagonally on plan having 6 chimneys
with coupled shafts on large rectangular bases, and clay pots on each side. Stone window openings
with chamfered mullions; metal casements with diamond panes, of 2-lights. Central, gabled dormer
to each dwelling with two, 2-light windows, lighting a vestibule below which has plank door and a
4-centred stone entrance archway. Chapel: coped gable to quadrangle with a large window of 5,
trefoiled lights with vertical traceried head. Below this is a plank entrance dooorway under a 4-
centred arch within a square head. There is a bellcote on the ridge. Road (entrance) front:
symmetrical. Centre gable contains the entrance with a 4-centred head under a square containing
moulding and label. Above this the former Chaplain's rooms, now meeting room, with a window on
either side of a segmental-headed niche which contains a figure of William Goddard; above this is
a 2-light window, lighting an attic, now disused. Below the niche is a stone tablet with the date
1627 and an inscription. On either side of the tablet and below the windows are 2 stones, one with
the arms of the Fishmongers' Company, the other with those of Goddard. Against the north wall of
the open entrance passage is an iron-bound alms post, above which is a tablet inscribed 'Hee that
giveth to the poor lendeth to the Lord", surmounted by the date 1638. On either side of the gable
is a one-bay section of one and a half storeys; the upper level is faced with tiling; each level
has a 2-light window. A chimney abuts the gabled section on each side. On each side of these are
one-storey almshouses with four 2-light windows and 2 chimneys. Chapel interior: 4-bay nave and
chancel separated by a fine Jacobean screen. The central opening is round-headed with spandrels
carved with scrolls within a square architrave. The upper part is divided on either side into 4,
small, round-headed openings carried on flat balusters with shaped brackets, carrying a moulded
cornice. The west window to the Chancel is of 5 trefoiled lights with elaborate tracery under a
pointed head; on either side is a window of 3-cinquefoiled lights with tracery under a 4-centred
head. The roof is of 4-framed bays of queen post trusses with moulded caps and bases to the posts;
double purlins with moulded, arch-braced collars with quatrefoils in the spandrels,
The famous painting in the Tate Gallery, called the Harbour of Refuge, by Frederick Walker, ARA,
depicts the Quadrangle, centre sundial, and front of Chapel.
V.C.H., Vol.III, p.93 (with illustrations), B.O.E. (Berkshire), p.101.