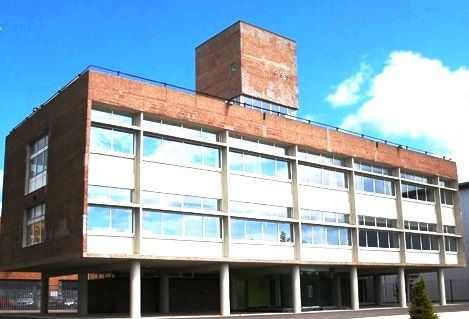 MATERIALS: a reinforced concrete frame (in situ and pre-cast), with brick and concrete, metal-framed windows, glass block and a marble plinth.

PLAN: orientated north-west to south-east, the building is rectangular on plan. The ground floor is recessed on all sides, most strongly on the principal, south-west elevation, which also has a central fully-glazed frameless entrance lobby which projects forward beneath the overhanging first floor.

EXTERIOR: of three storeys with a central tower, the building has a symmetrical façade of five wide central bays with a narrower bay to each end. It has piloti along the principal facade of the ground floor with a narrow vertical béton-brut finish, supporting the concrete 2’9” grid frame of the first and second floors. Projecting below the first floor, between the two central piloti is the glass-walled entrance lobby which sits on a green marble plinth. The underside of the first floor has an alternating pattern of béton-brut squares. The south-east elevation has an external spiral staircase in pre-cast concrete with metal handrails.

To the first and second floors the bays are separated by the projecting pre-cast concrete grid frame. The first and second floors have horizontal strip windows recessed behind the concrete frame. There are four panes to each central bay and two to each of the end bays, beneath which are concrete béton-brut panels. Above the strip windows is a further recessed strip, creating a shallow brise-soleil, or sun screen. The roof has a parapet, behind which is a central tower, rising a further two storeys. The tower has full-height glazing to the front of the base, and is a solid concrete block to the top, with occasional small square fenestration. When viewed from ground level it has the appearance of a floating block. It was designed as a recreation area, plant room and document storage space as well as housing plant and lift machinery.

INTERIOR: internally the building is arranged with services, stairway and lift centrally positioned, and office wings to either side. The floor of the lobby is paved with the same green marble slabs that form the plinth of the building. The stair is positioned at the rear of the building, behind the lift, and is of dog-leg form with tubular handrails and metal grille panels in place of balusters. It is lit by a wall of reeded glass block, alternately angled, echoing the pattern of the béton-brut elsewhere on the building. The six rectangular pillars of the concrete frame which run through the centre of the building are exposed on both first and second floors. The office space is primarily open-plan, with small cellular rooms located centrally at the front of the building. These have timber-framed divisions with plaster or glass infill. They have strip windows at the tops allowing light to pass through into the open-plan office space. The managing director’s office is on the second floor, giving it commanding views to the south. It has a veneer-panelled end wall with a cantilevered wall-mounted wardrobe, glass cupboard and drinks cabinet with a sliding retractable door. The furniture has brushed steel rims framing the front panels.

The offices for Carr’s Paper were designed by Ernö Goldfinger (1902-1987) in 1955/56. Sited next to the company’s factory, they were intended as a prestigious building for the administration of the company, and included office space, a managing director’s office, a board room and director’s suite. The company occupied the building until its demise in the late-C20.

Ernö Goldfinger is considered one of the foremost architects of his generation. A Hungarian émigré, he moved to Paris in 1920 where he trained under Auguste Perret at the École des Beaux-Arts and was closely involved in the early years of the Modern Movement on the Continent. He moved to Britain in 1934, where, unlike many of his contemporaries, he continued to be a major exponent of these ideas in the post-war period. He is perhaps best known for his larger projects such as Alexander Fleming House, London, 1959-63 (now Metro Central Heights), and for his public housing schemes of the late 1960s for the LCC (the Trellick Tower on the Cheltenham Estate listed at Grade II*, and the Cheltenham Estate and Balfron Tower, both listed Grade II). The former Carr’s Paper Offices is considered to be the first building of his mature phase and the only one of his office buildings to be found outside London.

In 2007, following the sale of the building, the offices were refurbished. This included the replacement of the Crittall NB windows, the removal of some internal (fixed and mobile) partitions and fittings, and the renewal of toilet and kitchen facilities. At this time the plate-glass entrance lobby was increased in size, and repairs were made to the external concrete surfaces.

Goldfinger House is listed at Grade II for the following principal reasons:

*Architectural interest: the work of a major C20 architect, it is a clean and crisp design, with a rhythm created by the regularity of its grid construction expressed through the concrete frame and piloti;

*Materials: it has an exposed reinforced concrete frame, and uses various good quality béton-brut and bush-hammer finishes, and has a marble plinth;

*Intactness: the building is largely unaltered externally, and internally retains many features of special interest;