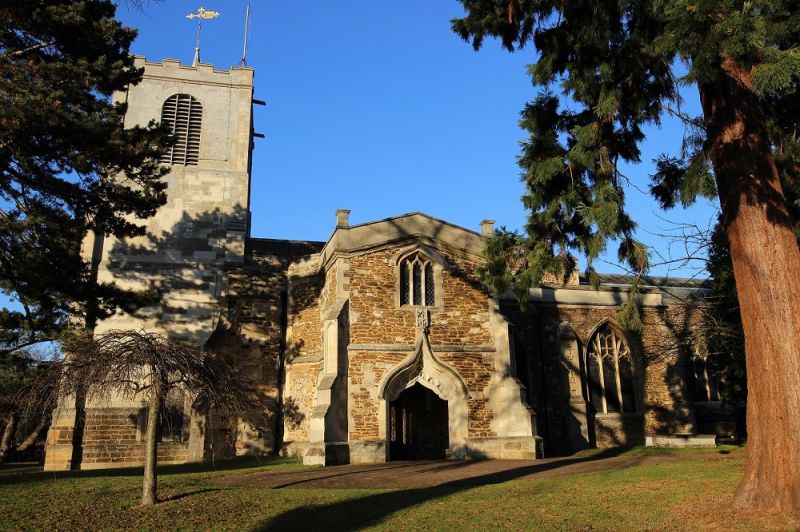 MATERIALS: Mostly coursed, dark ironstone rubble: tower of grey ashlar on an ironstone base. Limestone dressings. Slate roof to the chancel. Other roofs hidden behind parapets.

PLAN: W tower, nave, wide N and S aisles, S porch, long chancel, N organ chamber arranged transept-wise at the E end of the chancel and between this and the N aisle vestries and toilets, halls attached at NW of the N aisle.

EXTERIOR: St Andrew's is a large church with its E end facing the main N-S road through Biggleswade. The E wall of the chancel has a very large and wide window of seven lights with its head filled with tightly-packed panel-tracery. The E gable has a break in slope reflecting the Mansard-style profile of the chancel roof behind. The side windows of the body of the church are all of Perpendicular design of varying forms, all of three lights but with panel-tracery in the aisles, more flowing designs in the chancel side windows and simple broad windows for the nave clerestory. The church has plain parapets to its principal components, apart from the three-stage tower which is embattled. This was rebuilt in 1720 and is generally medieval in appearance apart from the very individual treatment of the detail on the clasping buttresses on the W face, the round-arched openings on the middle stage (W) and in the belfry windows and the way the treatment of the junction between the middle and belfry stages. The ironstone base of the tower may be a relic of its predecessor. The two-storey S porch is a notable feature with its spreading buttresses and ogee S doorway: the latter has a highly unusual treatment of blind quatrefoils over the entrance and which follow the profile of the ogee moulding above. Over apex of the hood-mould is a representation of the Trinity. Within the porch is a tierceron-star vault.

INTERIOR: The interior walls have all been stripped of their plaster in the late C19. The nave and aisles are separated by Perpendicular four-bay arcades with moulded arches and piers with four shafts in the cardinal directions and hollows between. The chancel arch has similar detail. At the W end the tall tower arch is a remnant from the early C14 tower. The C19 nave roof is flat and of tie-beam construction with arch-braces which spring from timber wall-posts and have quatrefoil tracery in the spandrels: it is divided into rectangles and is longitudinally boarded. The flat-pitched S aisle roof, however, has much late medieval work including a number of carved bosses. The chancel roof is four-sided, reflecting the external profile, and was renewed after a fire in 1953 by the architect Michael Tapper. The N aisle roof is flat and longitudinally boarded and appears to date from the late C19.

SUBSIDIARY FEATURES: There is an extensive amount of late C19 and early C20 furnishings. The nave and aisle pine benches are of 1870 and have square ends with traceried detail. In the chancel the poppy-headed stalls survived the 1953 fire. At the E end the stone reredos was designed by R J Withers in 1877 and was completed with the addition of mosaic work by Salviati in 1881. The wooden wine-glass pulpit (replacing a stone one of 1870) and the rood-screen were installed at the end of the First World War. In the floor of the chancel is are the remnants of a large and very remarkable brass to John Rudying who is said to have rebuilt or refurnished the chancel. It includes a long Latin inscription between Rudying and the figure of Death who is about to strike him with a spear: it is in the tradition of the memento mori in that, despite Rudying's self-proclaimed accomplishments, Death points out that all men come to the same end. There are a number of minor wall monuments. The stained glass in the E window was installed in 1877; the chancel SW window depicting the Crucifixion is of 1882 and is by Lavers and Westlake; the middle window on the S of the chancel is by C E Kempe and is in memory of G J Barnett who died in 1892.

HISTORY: The church is first mentioned in a grant of the manor of Biggleswade to the bishops of Lincoln in 1132. None of the fabric dates back that far with the earliest fabric being of the c1300/early C14. Most of the church is of the C15 and the chancel is said to have been rebuilt or refurbished between 1467 and 1481 by Archdeacon John Rudying (d. 1481). The medieval tower collapsed in the early C18: a brief was issued in 1719 to fund the rebuilding which took place in 1720: it was fitted with a ring of five bells cast by Thomas Russell of Wootton in 1721. The history of the building in the C18 and early C19 is strewn with reports of disrepair and unseemly fittings, and a re-pewing took place in 1832-3 with the aid of a £200 grant from the Incorporated Church Building Society: the work was carried out by William Edwards of Biggleswade at a cost of £565. A further increase in accommodation was secured in 1842 for which the architects were John Elger and Harvey Lonsdale Elmes. Elmes's claim to fame is as the architect of St George's Hall in Liverpool which had been begun the previous year and which is one of the greatest neo-Classical buildings in the world.

The main restoration came in 1870 when W G Habershon and Pite repaired the roofs and stonework, added a N organ chamber, opened up the tower arch and carried out the present seating scheme which replaces the, by then, old-fashioned late Georgian one. Corbels were introduced to carry the wall-posts for the nave roof. The contract, valued at £1957, went to Messrs Edey of St Neots and the church was reopened on 30 November 1870.

Later embellishments included the stone reredos designed by the London architect, R J Withers, in 1877 with decoration by the famous mosaicist firm of Antonio Salviati. After the building of a sister church in Biggleswade, St John's, in 1883, the pressure on accommodation eased and the galleries at St Andrew's were removed in July that year. Shortly after, the great Victorian church architect, William Butterfield, was commissioned for further improvements, including reroofing the chancel and the addition of a new vestry, which were carried out in 1885-8. The chancel and organ chamber were badly damaged by a fire on 15 November 1953. Restoration took place in 1953-3 under Michael Tapper and included alterations to the vestries and the erection of an organ gallery at the W end. The church was rededicated on 13 May 1955. Structural additions were completed by the addition of the rooms to the NW of the church in the late 1970s.

REASONS FOR DESIGNATION:
The church of St Andrew, Biggleswade, Bedford is designated at Grade II* for the following principal reasons:
* It is a large and impressive late medieval town church with a C18 tower and extensive C19 work with C20 additions.
* It retains medieval woodwork and a highly important brass.