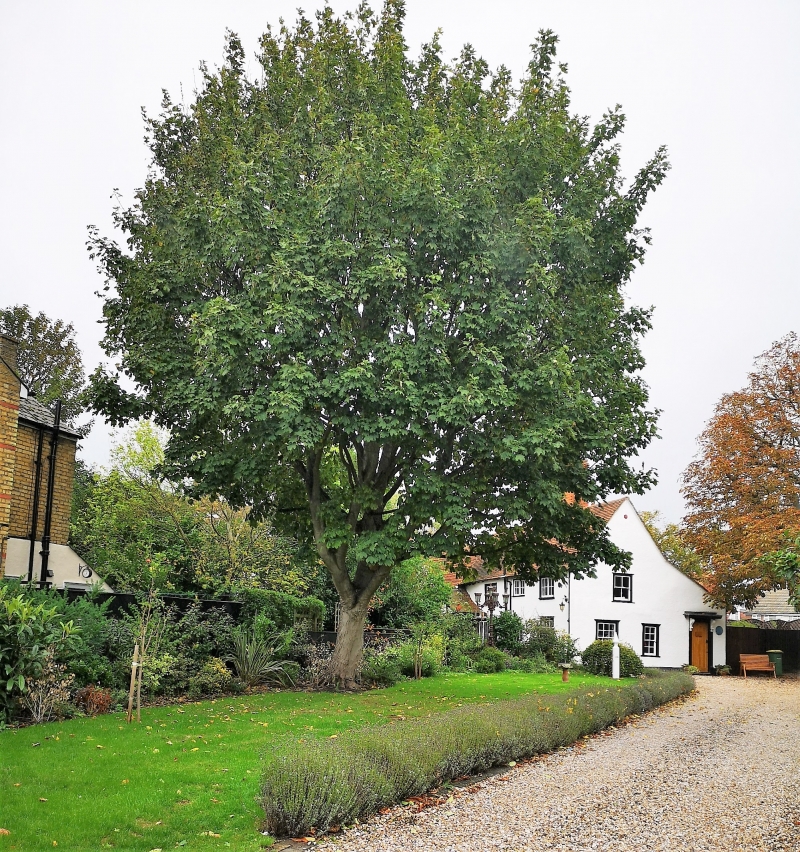 ROCHFORD EAST STREET
TQ 8790 NE
(north side)
15/204 No. 17(Kings Hill)
15.5.68
GV II
House. Circa 1300 or earlier origin with later alterations and additions.
Timber framed and rough rendered. Plaster rose to eastern gable. Red plain
tiled roofs. T plan with additional ranges to north. Central red brick
panelled chimney stack to east range, exterior stack to south of west range.
One storey and attics or 2 storeys. The eastern range, south face, 3 window
range of various vertically sliding sashes and casements, that to ground floor
left an angled bay. Lean-to porch to south east of west range with C20 door.
Of complex plan, the roof of the eastern range is of simple 2 armed crown post
construction. There is a splayed scarf with undersquinted abuttments to the
north wall top plate. Back to back inglenook fireplace. Stop chamfered ceiling
beams to inserted ceilings. C18 cupboard. The western range has been much
altered and its age is uncertain. The Whispering Court Post stands in the
garden approx. 4 metres south of the south wall of the house, the south face is
dated KH 1867, the east face 1340 and the north face has a plaque relating
restoration November 1935. The date of origin of the Whispering Court is
unknown, but it is believed to have been held at Kings Hill, Rayleigh during the
reign of Henry III, 1216-1272. Said to have originated when a normally
absentee Manorial Lord returned home and heard, at midnight unsuspecting tenants
plotting to murder him. As penance for their treachery they were commanded to
assemble at Kings Hill, annually on the Wednesday after Michaelmas at midnight
to do homage for their lands in a whisper. Morant says the time is "upon the
first cock-crowing; without any light but such as the heavens will afford". It
is believed Robert Riche, second Earl of Warwick moved the Court to Kings Hill,
Rochford, nearer his home Rochford Hall. The Deeds of the Manor of Kings Hill
stipulate that the post must never be removed. In the C18 a feast was held at
The Kings Head before the tenants set off for the Whispering Court. L.E.
Jerram-Burrows "Rochford Remembers" 1983. P. Morant History of the County of
Essex 1763-8. Nos 1 and 2 Kings Hills Cottages q.v. were probably part of the
homestead.