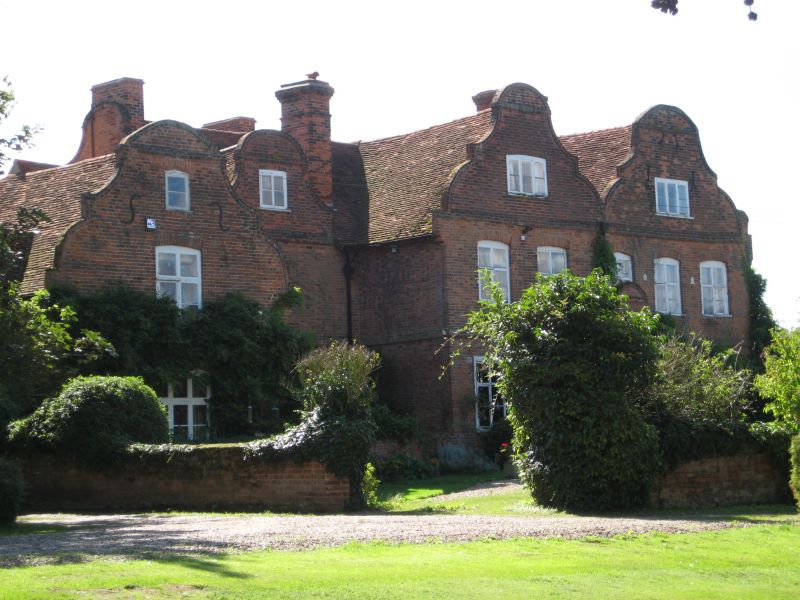 House. Late C17, altered in C18, C19 and C20. Red brick in English bond, some
plaster, roofed with handmade red clay tiles. Complex plan comprising (1) main
block of square plan facing NW, with an internal stack at right, (2) square wing
to right of one storey with attics, with C20 conservatory to the rear, (3)
service range to left, facing NW, with 2 internal stacks, (4) service crosswing
to left of it, extending forwards and backwards, with one internal stack, and
one external stack to left with oven beyond, (5) C19 extension to rear of it,
and lean-to extensions to left. 2 storeys with attics. Scattered fenestration,
mainly late C19/early C20 casements in segmental arches, but including 2 sashes
of 12 lights on the ground floor. 4-panel door and plain fanlight at front of
late C19/early C20 porch with curvilinear gable. Plain boarded door in service
range (3). String course at first-floor level. Partly obscured by creeper at
time of survey, September 1985. 4 curvilinear gables each having one convex
quadrant and one concave curve on each side, a segmental head with a string
course at its base, and a projecting brick coping. The 2 gables on the main
block (1) have a string course at the base of the gable. 2 firemarks attached
to main block (1), Sun and Salop Fire Office. The right wing (2) has a C19 sash
of 6 lights in a dormer with a curvilinear gable of similar style. The rear
elevation has on the ground floor 3 sashes of 12 lights, and a splayed bay with
French window and 2 more sashes, and on the first floor 4 similar sashes and one
blocked window aperture. Some of these sashes may be C20 reproductions, for a
photograph taken by the RCHM c.1920 shows another first-floor window blocked. 2
similar curvilinear gables, and a similar dormer on extension (2). The right
return has 2 similar gables on the main block (1) and one on the extension (2).
The left return has a similar gable on the service range (3). Open well stair
with moulded handrail and turned balusters. C18 pine panelling in one front
ground-floor room of block (1). Introduced early C17 oak panelling in
ground-floor room of block (3). This room has chamfered joists of horizontal
section, some with broach stops and some with step stops, indiscriminately
mixed, which suggests that they have been re-used from an earlier building.
Pevsner describes this as 'a remarkable and characteristic example of Essex
brick architecture of c.1675' (The Buildings of England - Essex, 1965, 79), but
his suggestion that 'internal features, however, seem to prove that the house
itself is earlier and was only remodelled about 1675' appears to be based on the
joists of block (3), and is not supported by other evidence visible at the time
of survey. The fountain he described was sold c.1970. RCHM 3.