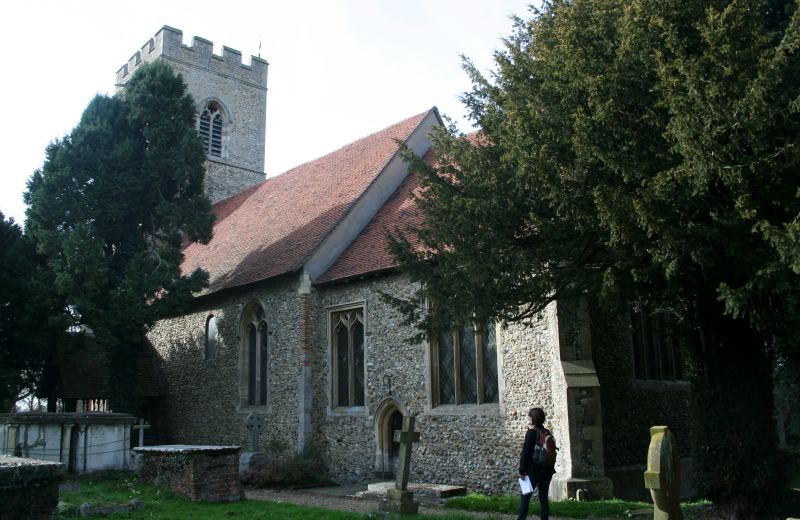 Church comprising West Tower, Nave and Chancel, north vestry and south porch. The
walls of flint rubble, clunch and Roman brick with plain red tile roof. The C16
restored West Tower, with C14 work, is 12ft. x 11 1/2 ft. of 3 successively diminished
stages, with diagonal buttresses, splayed plinth and crenellated parapet. There
is a C19 west window, second stage has square headed, 2 light windows with trefoiled
heads to south and west, and much restored windows to each wall of bell chamber.
Small rectangular windows to bell chamber stairs. Tower Arch is two centred as
is the stair doorway. The Nave, 43ft. x 25ft. has angled quoins of Roman brick
and stone. Of the 2 north wall windows, the Eastern is C14 and the western Cll.
Below this is the blocked Cll North doorway with semi-circular head, plain jamb
and chamfered imposts. The plastered tympanum rests on the oak lintel. In a
recess to the East are the former rood loft stone stairs. Of the 4 south wall
windows, the eastern and western are C19 with C14 work, the centre two are Cll
round headed with external arches of Roman brick with some jamb stones pierced as
if for bars. Under the 3rd window, uniform with North doorway is the South
doorway with jamb morticed to receive a bar. The Early English door is of four
planks the joints between covered with iron strips and with ironwork of the same
date. The Nave roof late C13 with trait-de-jupiter scarf, scissored couples some
of which were replaced with double collars at a later date, double wall plates and
4 braced crown posts 2 to centre purlin and 2 to tie beam. There is a Piscina in
the south wall with cinquefoil drain and square head. The Chancel 21st. square has
C13/C14 work in C19 restored or renewed windows. C19 South door. Cll Chancel
arch with semi-circular head. The C14 roof has an octagonal Crown drain post with
moulded base and capital and moulded tie beam supported by stone corbels with
carved grotesques. Piscina has a sexfoil under a cinquefoil ogee arch. There is
a recessed trefoil arch with moulded jamb in west wall south of Chancel Arch. The
square Norman Font is of Purbeck Marble moulded and carved with rough zig-zag
pattern. The top with incised concentric circles in the spandrels, circular stem
on square chamfered base. Timber framed South Porch of C14 rebuilt C16 with 2
centre arch, the open sides with turned balusters. Cusped barge boards to gable.
(RCHM 2)