A Grade I Listed Building in Egglestone Abbey, County Durham 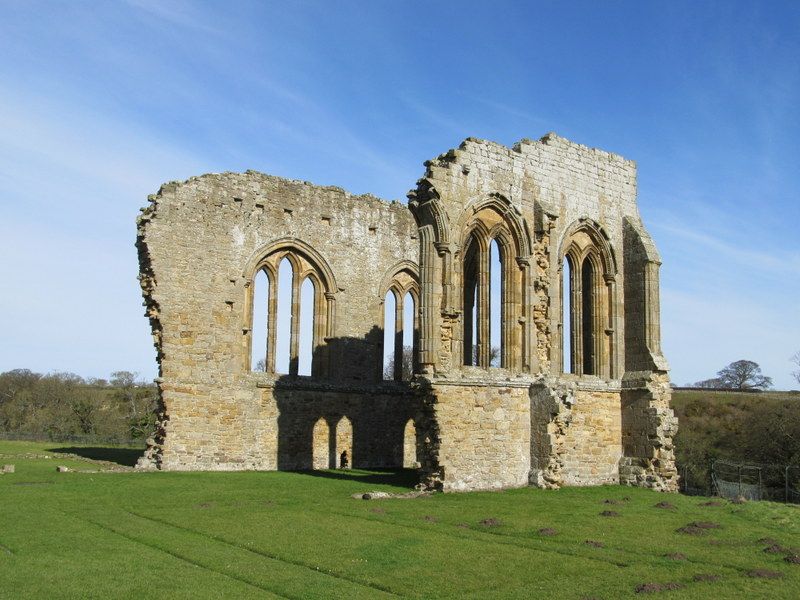 Nave has chamfered plinth, pilaster buttresses on north and west, and a
moulded cornice on corbels below a C15 heightening. At west end a blocked
doorway, with a late C13 2-light window, replacing a pair of earlier lancets.
North wall has a round-arched chamfered doorway, moulded corbels and a string-
course marking the position of the cloister roof, and 2 lancets. 4-bay south
wall has sill string and stepped buttresses; moulded doorway in west bay;
windows of 3 lancet lights under one arch with pierced spandrels, multi-
hollow-chamfered surrounds and hoodmoulds.

Only the west wall of the south transept stands, with moulded plinth and angle
buttresses with gabled crocketed heads at the south-west corner; two late C13
2-light windows and a C15 stair turret.

The chancel has a chamfered plinth and stepped buttresses, the eastern
moulded. Two 2-light windows on south; 2- and 3-light on north: lancet
lights, under pointed arches, have jamb shafts with nail-head capitals.
5-light east window has similar surround but with straight moulded mullions.
South and east windows have richer mouldings.

East range of cloister 3 storeys: largely mid-C16 with 2-, 3- and 4-light
mullioned windows, those to ground floor with heraldic or head hoodmould
stops. Interior: C16 lst-floor fireplace with flat-pointed head; the north
end the C13 groin-vaulted rere-dorter undercroft with a segmental-arched
fireplace. North range shows remains of warming house fireplace, and a large
C16 stepped stack to north. The other domestic buildings are reduced to
footings and lower courses (except for a length of wall with 2 doorways on
south side of cloisters).

Historical notes: Abbey founded between 1195 and 1198 by the de Multon family,
as a daughter house of Easby. It was a poor house, suffering heavy losses in
the C14 Scottish Wars, the canons still being exempted from taxes in 1496 'on
account of their notorious poverty'. After Dissolution in 1540 it was granted
to Robert Strelley and the domestic buildings converted to a house, which by
the C19 had labourers' cottages. c.1900 the north transept was demolished to
provide stone for paving the stable yard at Rokeby Hall.