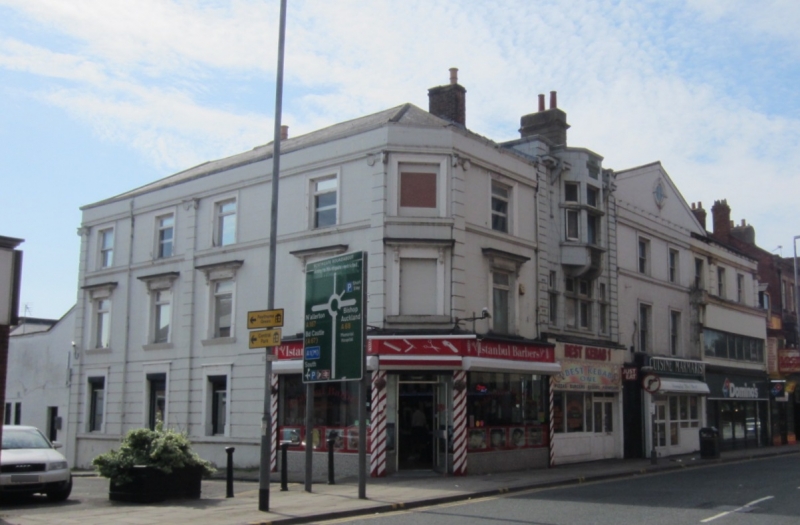 Two later C18 houses owned by Edward Pease, and the location of the meeting between Pease and George Stephenson which led to the construction of the Stockton and Darlington Railway. Pease's house was remodelled in 1866 by its extension and division into two shop units and the reconstruction of the main elevation. The houses underwent further modifications during the C20.

EXTERIOR: Main (west) Elevation: a three-storey building of eight bays with a low-pitched roof and two end chimneys. There is a four-bay pedimented central section containing a round window, defined by rusticated Ionic pilasters, and the entablature rests on similar pilasters at the ends of the building. The second bay has a second floor oriel window and other windows are sashes in moulded architraves, one of which at first floor level in bay one has a console bracketed cornice. There are modern shop fronts to the ground floors and to the first floor of bays five to eight. The oriel window of the second bay building has two plaques, one reads 'Where/ Edward Pease/ Resided/ 1820' and 'First/ Public Railway/ Inaugurated Here'
Left Return: canted corner bay with second floor oriel window and four bays with entablature and rusticated Ionic pilasters; windows are all C20 replacements in moulded architraves, and those at first floor level have console-bracketed cornices. There is a modern shop front to the ground floor of the first bay.
Rear (east) Elevation: scattered fenestration with numerous original openings with brick arches, many of which are blocked and several inserted openings. There are numerous small brick extensions. The left three bays are the most coherent, constructed of C18 brick with a round-headed stair window and an C18 rear range.

INTERIOR: the ground floors are occupied by open-plan shops, and refurbishment has removed all original features. Other parts of the interior inspected revealed no historic features of note.

The Oxford Dictionary of National Biography entry for Edward Pease (1767 to 1858) makes clear his role in the origin and development of the Stockton and Darlington Railway. As originally envisaged, the scheme was intended as a tram road, carrying coal and drawn by horses. A well-documented meeting took place between Edward Pease and with the Killingworth Colliery engine-wright George Stephenson (1781-1848) in the kitchen of Pease’s 48 Northgate home on 19th April 1821. At this meeting, Stephenson recommended the construction of a rail road rather than a tram road. This first meeting between Pease and Stephenson led to the construction of the Stockton and Darlington Railway, the first public passenger railway in the world, and to George Stephenson’s appointment as engineer to the line. Stephenson’s entry in the Oxford Dictionary of National Biography outlines his subsequent career, including his appointment as engineer on the Liverpool and Manchester Railway.

The block 138-148 Northgate originally comprised a pair of later C18 houses owned by Edward Pease, and recent research has identified the house in which he lived until his death. The location of the original kitchen in which the meeting between Pease and Stephenson took place has also been identified as the ground floor of the second bay (now occupied by Best Kebab). In 1866 the pair of houses was remodelled by the division of the Pease house into two shop units and the construction of an extension to the north end. The west elevation was reconstructed with stucco, pilasters and a central pediment. In 1909, the second bay was refronted and in 1923, bays five to eight were converted to a single shop with a new shop front. There have also been C20 alterations.

This pair of later C18 houses, remodelled in 1866 with further C20 modifications, are designated at Grade II for the following principal reasons:
* Architectural interest: a pair of later C18 town houses which although remodelled in 1866 are readable, and the mid C19 changes possess some architectural interest in their own right;
* Historic Interest: as the home of Edward Pease and the location of his historic meeting with George Stephenson, leading to the construction of the world's first passenger railway.