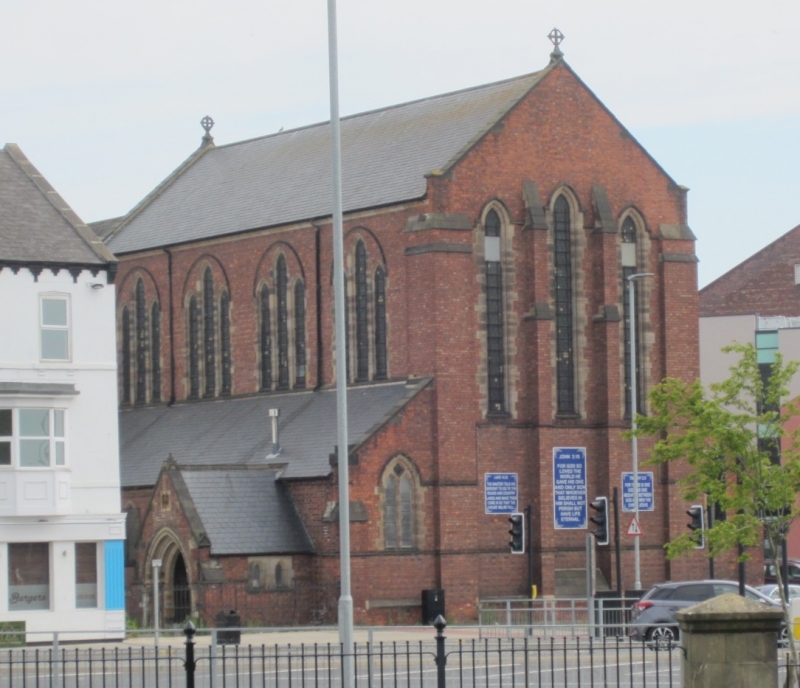 EXTERIOR: Built in the Early English style. The W end, to the road, has three tall lancet windows with double-chamfered frames divided by two tall, slender buttresses with offsets. The N and S sides have low lean-to buttressed aisles with paired lancet windows. The nave walls above have large triple graded lancet clerestory windows with rounded hoodmoulds. The S side has a moulded doorway with a two-leaf door with decorative strap hinges. There is a N porch with a moulded outer doorway with engaged shafts with bell capitals. The tall, narrow S transept has a cusped circular window in the gable. The vestry block has a plate tracery E window and a transomed S two-light window and a stack against the S transept. The N chapel is distinctive, its N wall being canted in to the E following the shape of the site, and has a striking, large five-light plate tracery E window.

INTERIOR: The walls of the well-proportioned interior (presently empty) are of bare red brick with bare sandstone dressings. The arcades have circular and octagonal piers, moulded capitals and double-chamfered arches. At the entrance to the chancel the arch is tall and has semi-circular responds. On the N of the chancel there is a two-bay arcade to the NE chapel which has been screened off. Over the nave is a tie-beam and crown-post roof

PRINCIPAL FIXTURES: Nearly all the fittings and stained glass have been removed. The font has an octagonal stone bowl on a stem with engaged shafts and an outer order of detached shafts. Stained glass survives in the upper part of the E window.

SUBSIDIARY FEATURES: E of the church and linked to it is the church hall, modest in scale with stone mullioned square-headed windows and an entrance on the S.

HISTORY: The church was built in 1887-8 to the designs of John Loughborough Pearson (1817-97), one of the greatest of all C19 church architects. He began practice in 1843 having trained in the offices of Ignatius Bonomi in Durham and Anthony Salvin and then Philip Hardwick in London. He was awarded the RIBA Royal Gold Medal in 1880 and is remembered for a series of exceptionally fine churches. These often display strong French influence: Pearson's most famous building is Truro Cathedral, begun in 1880 and the first English cathedral built on a new site since Salisbury in the early C13. St Hilda's is in the mould of late 19th-century brick churches which were built with modest financial means but still strived and usually succeeded in creating quite a grand effect thanks to their scale and height, in this case `A boldly massed composition' (Pevsner and Williamson).

The church was declared redundant in 1986 and most of the fittings had been removed by 1987. In 1993 conversion was granted to a community centre, offices and residences. It was vandalised and fire-damaged before the Light and Life Gypsy Church acquired the building in 1996 which still owns it (as at June 2009)

REASONS FOR DESIGNATION:
The church of St Hilda, Darlington, is designated at Grade II for the following principal reasons:
* It is of special interest as a late 19th-century brick church in the Early English built with limited financial means but nonetheless achieving a good architectural presence.
* It is a late work by J L Pearson, one of the greatest of all Victorian church architects.
* Despite the loss of its fixtures, the interior retains its spatial quality.