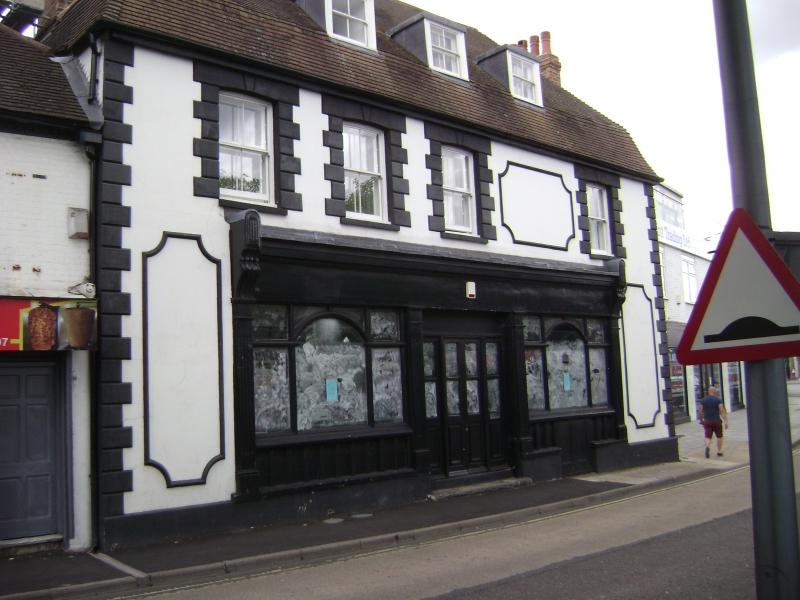 The original floor-plan is lost at ground floor but the position of the stair, the principal entrance, and the chimney stacks, suggest it comprised a central entrance hall with stair to the rear, and rooms leading off to the left and right. At first floor and garret level the layout is likely to be partially original, with rooms leading off from stair landings. The existing partition walls between rooms (largely damaged by fire at time of inspection) are generally modern, but at first floor two sections of in-and-out panel partitioning, partially fire-damaged, remain.

EXTERIOR: The front (west) elevation is rendered with stucco quoins to the corners and around the four irregularly-spaced first-floor two-over-two sash windows. To the ground floor is a fire-damaged pub frontage with Venetian windows either side of a central doorway, above is a fascia and cornice with corbels to either side.

INTERIOR: At ground floor the building is largely open-plan, although the stair tower has been enclosed and the lower part of the main stair removed. To the north of the stair tower a winder stair gives access to the landing between ground and first floor. To the east a modern flat-roofed extension provides a kitchen and toilet facilities. Above ground floor, the principal feature of note is the substantial open-well stair housed in the stair tower. The stair has been lost below the first landing, and is slightly truncated at the attic level, but survives well between these points. The stair has a closed string and barley twist balusters, which support a wide and deeply moulded handrail. At first floor there are sections of dado panelling in the stair-well. A number of fireplaces survive, but fire surrounds generally do not. Cupboards to either side of the substantial northerly first-floor fireplace were badly fire-damaged at the time of inspection. The cupboard to the right, lit by one of the narrow casement windows, was possibly a wig cupboard.

HISTORY: The building could have been built as a town house, for someone from the merchant or professional classes, or it could have been built as a small inn. In either case, the building appears to be in use as an inn by the end of the C18. The 1791 Universal British Directory lists victualler John Miller at the Old Three Gardeners in Strood, although no street address is given. References to the Jolly Gardeners and the Three Jolly Gardeners can be found in lists of licensed traders and directories for Strood during the early C19, and the first census return of 1841 lists victualler Samuel West at the Three Gardeners Inn in Cage Lane (North Street was known as Cage Lane until the mid C19). Although this is the first reference which links the name of 'Three Gardeners' to North Street, it seems likely from the map and written evidence, that No. 4 North Street has been in use as licensed premises since the late C18.

Licensed premises were not necessarily purpose-built in the C18; many were houses, with owners or tenants gaining a license to sell beer or wine, and often letting out rooms. It was not until the C19 that the public house evolved into a distinct building type, with an external shopfront and a bar counter inside. At this time, many existing establishments were remodelled to accommodate this new fashion. The front elevation of No. 4 North Street was remodelled in the late C19, and this included the insertion of a ground floor pub-frontage. The first Ordnance Survey map of 1866, prior to this remodelling, shows a short flight of steps to the centre of the front elevation, indicating that the principal entrance to the building was historically in the same position as it currently is. The 1866 map, and successive maps, shows the building had a range of out-buildings to the rear until at least the mid-C20.

In early 2009, the building suffered a significant fire, resulting in some considerable internal damage, particularly to the ground floor.

REASONS FOR DESIGNATION:
The former Three Gardeners Public House, 4 North Street, Strood, is designated at Grade II for the following principal reasons:
* Architectural interest: as an example of a substantial, detached, early C18 town house which retains evidence of its plan form
* Interior fixtures: some early C18 woodwork survives, notably the majority of the early C18 open-well stair with barley-twist balusters in a rear stair tower, and sections of panelling
* Historic interest: it is one of the few built remnants of pre-C19 Strood, and despite the late-C19 alterations to the front elevation, the building retains a strong early-C18 character.