A Grade I Listed Building in Gainford, County Durham 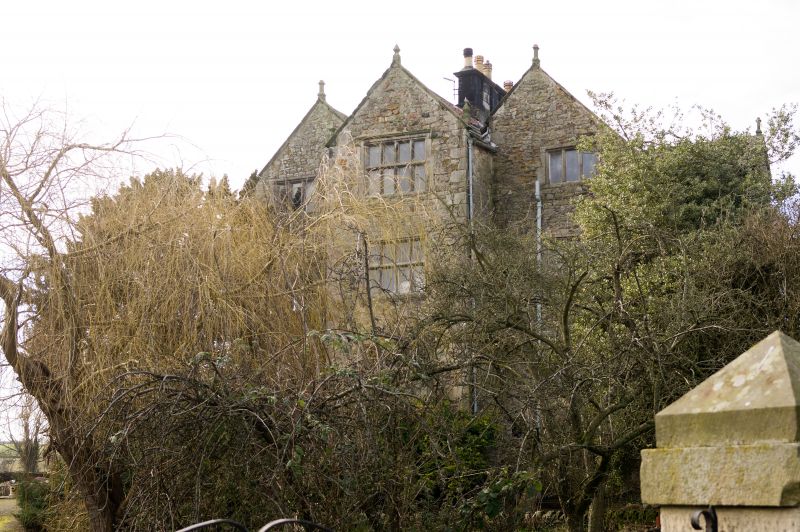 Manor house, 1600-1603 for John Cradock, Vicar of Gainford. Restored later C19. The attached outbuildings and walls are not included in the listing.

PLAN: a tall, compact nearly square plan with central gabled projections: those to front and rear are full-height porches and those to the right and left returns are wider stair towers. Internally it has a split-level double-pile plan with two storeys of principal rooms over a basement with an intended long attic gallery to the S range (front) and three storeys of service rooms and additional bedrooms plus attic to the N range (rear). A central double-thickness spine wall accommodating all of the building's fireplaces over three floors, with a corridor to the rear separates the N and S ranges. The floors of the N range are set at a lower level than those of the S range, and accordingly some false windows to the E and W elevations were created to maintain the external symmetry of the building.

EXTERIOR: both ranges and all of the projections are gabled, and all are coped and have carved stone finials. Windows are mostly double-chamfered stone-mullions, some are transomed, and they are of varying widths.

The three-bay S elevation has a central, projecting three-storey porch, reached by eight steps. The round-headed doorway has an elaborate doorcase with fluted pilasters and an entablature with the initials IC and a shaped pediment bearing a shield with strapwork and finials. There are five-light windows with two-light returns to the first and second floors, as if the windows wrap around the projections. Either side of the porch there are a pair of two-light mullioned windows to the basement, and the ground floor has a six-light mullioned and transomed window lighting the hall to the left bay and a similar three-light window lighting the parlour to the right bay. The first floor has two three-light mullioned windows. The roof has three steeply-pitched ridges, parallel to the front with slightly-projecting eaves. The central ridge has groups of four-three-four conjoined and corniced chimney stacks.

The left return has three gables: a four-storey left bay with two and three-light mullioned windows and a large blocked three-light mullion window; a three-storey stair tower with a four-light mullioned and transomed window to each floor, and a four-storey right bay. The latter has a doorway with chamfered jambs, a basket-arched lintel and a double-thickness door and a two-light blocked mullioned window to the basement, with similar three and four-light windows above. The right return is similar with a blocked opening with a four-centred arched head to the stair tower.

The rear elevation has a four-storey porch with a C20 part-glazed door in a chamfered surround under a restored four-centred arched head. There is a four-light mullioned and transomed window above, and a worn tablet in a classical frame with a shield and the initials IC MC RC and the date 1600. There are two four-light mullioned and transomed windows to each floor above, the upper window under a hoodmould. Windows in the bays either side of the porch are three, four and five-light mullions.

INTERIOR: there are boxed-in timber beams throughout the building, except to the ground floor service areas of the rear range which have exposed chamfered beams with stops. All upper floors have a variety of later C19/early C20, four-panel doors and contemporary architraves and skirting boards. The double-thickness central wall contains all of the fireplaces and flues, and there may be other fireplaces obscured behind wall panels.

South Range: this contains the principal rooms. There is a round-headed arched recess to each side wall within the S porch, with a moulded cornice and corbel above. The porch opens into the main hall, which has early-C17 small square oak panelling throughout, incorporating several seven and eight-panel doors with decorative hinges, one of which leads down a flight of stone stairs, through the thickness of the central spine wall and into the service range to the rear; immediately to the right of the latter there is a cupboard within the thickness of the wall containing a small rectangular alcove with a crudely constructed small timber door with strap hinges of C16/C17 date. The panelling has a decorative timber frieze of carved arcading, and above this there is a deep plaster frieze with three bands of ornament: individually cast flowers and fruits set in random sequence, a repeat cast of a mermaid flanked by winged cupids with bows and to the bottom large leaves, fruits and sprigs in random sequence. Analysis of the motifs has identified several paralleled elsewhere and suggested that they derive from a contemporary embroidery sampler or embroidery design book. A large, chamfered segmental-arched fireplace occupies the centre of the N wall. The parlour to the right, entered through a seven-panel door, has similar small, square panelled walls and a moulded ceiling cornice; the N wall, which has an inserted early-C20 chimney piece, is lined with late C19/early C20 lincrusta (wall covering) in the form of small, square panelling. Both of these ground floor chambers retain some wide floor boards indicative of an earlier date.

To the first floor, is the former great chamber above the hall, which is subdivided into two rooms by a light, modern partition, and retains an ornate stone, Tudor-arched fireplace with ornate stops. The best bed chamber lies to the right above the parlour and has a stone chimney piece with a mid- to later-C19 arched inset. Other fixtures and fittings on this floor are C20. The second floor is thought to have originally been open to the roof trusses and was probably intended as a gallery. The cellar, accessed via a Tudor-arched opening through the N side of the central spine wall, is divided into several rooms and the original external double-thickness cellar door retains an original lock box.

Stair Towers: the E and W stair towers are of closed well form, the W of stone construction and the E thought to be unfinished, but both with reconstructed timber staircases with stick balustrades with hand rails where they cross windows. Both staircases provided a variety of circulation patterns through the house from services up to bed chambers, from hall to great chamber, and from parlour to best bedchamber.

North Range: this contains the service areas. The ground floor has an L-shaped stone-flagged passage set against the central spine wall, through which there is access to the cellar and the great chamber of the S range. The service rooms are reached through a crude four-panel door and via the L-shaped passage; there are presently four rooms and with the exception of a hand-bell board to one of these, fixtures are few and include modern kitchen fittings and shelving. There are three bedrooms to the first floor above some C20 fittings including those to the bathroom and a wooden window seat; the other two rooms both have chamfered Tudor arched fireplaces with ornate carved stops, and are fitted with cast-iron ranges. There are three further second floor rooms above with modern fittings; the most easterly has a late-C19 chimney piece and floral-tiled insert and the central room has a C19 chimney piece and mid to later-C19 arched grate.

Roof Structure: a wide, four-panel boarded door with strap hinges gives access from the E stair turret to attics above the front and rear range. There are separate original, pegged roof structures above each range, one side of each carried on the double-thickness central wall. Each roof comprise five triangular trusses of tiebeam-and-principal form with a high collar and double purlins supported in trenches on the back of each truss. The wire transmission system for the hand-bell board to the service area is attached to the sides of the central chimney wall. A gallery is thought to have been intended for the top floor of the S range, which was glazed but never completed internally. A timber ladder provides access to the roof.

Gainford Hall was built between 1600 and 1603 for the Rev John Cradock, vicar of Gainford from 1594 until his death in 1627. Dr Cradock was appointed Archdeacon of Northumberland in 1619, before becoming Spiritual Chancellor to Bishop Neile in the same year. The building has a double-pile plan-form, considered to be cutting edge design in early C17 England; this building is considered to be the earliest example of a double-pile plan in a completely new building in County Durham and almost certainly in the N of England. Dr Adrian Green of Durham University considers that the clerical university-educated nature of Rev Cradock linked him to trends and influences nationally, and perhaps to architects too. However, while the double-pile plan-form is associated nationally with the architect Robert Smythson and his son John, there is no documented evidence of a connection between the Smythsons and Gainford Hall. The E staircase and the top floor, the latter glazed externally and probably intended as a gallery, were both unfinished. The 1666 Hearth tax records that JNO Cradock was assessed for eleven hearths, but not all of these were necessarily at Gainford Hall. By the end of the C17, a more strictly neo-classical style of design was becoming fashionable, and it is unclear how many of Cradock's descendents resided at the hall. In 1846 the building was described as being in a ‘dilapidated state’ and it was restored in the later C19. More recently it has been occupied by three generations of the same family. All Ordnance Survey editions back to the original 1:10560 first edition surveyed in 1855 depict Gainford Hall with its present footprint.

Gainford Hall, 1600-1603, is listed at Grade I for the following principal reasons:
* Date: an exceptional building for its very early use of the compact double-pile plan with flanking stair towers which originated in the very late C16, and of which this is considered its earliest use in the North of England;
* High status: an Elizabethan manor house designed for John Craddock, Vicar of Gainford and later Archdeacon of Northumberland, a member of the clerical gentry with access to wider trends nationally;
* Degree of survival: the building retains its early-C17 form throughout and is a highly readable early dwelling with an original roof structure;
* Design: a large and sophisticated building, almost square and symmetrical with full height porches or stair towers to the centre of each elevation and overall displaying great subtlety in its external articulation;
* Interior: an ingenious and intact split-level interior, employing a spine wall with back-to-back original fireplaces and joinery and plasterwork to the ground floor chambers.