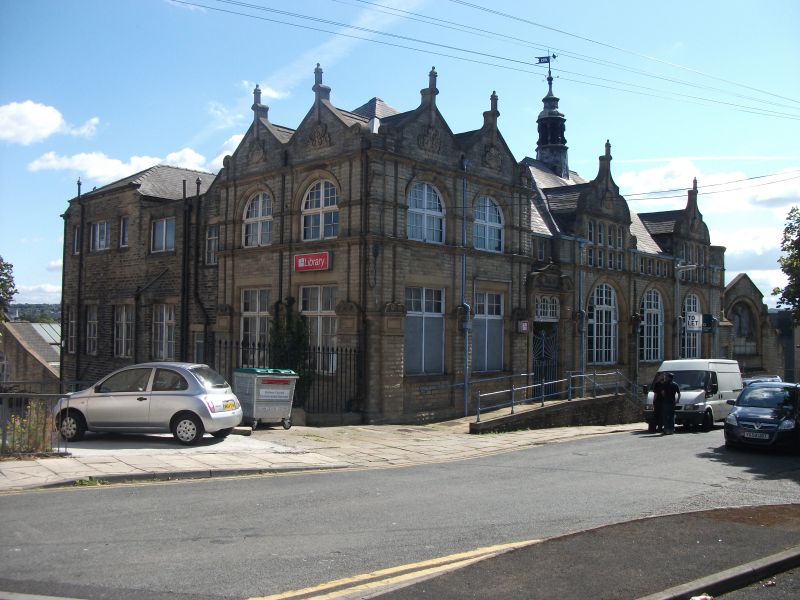 Public Library. 1894-96, altered 1931 and 1967. Designed by G E T Lawrence. Rock-faced stone with ashlar dressings. Hipped slate roofs with single octagonal cupola.' Chamfered ashlar plinth. 2 storey. Main, north-west front has off-centre doorway with moulded ashlar door surround topped with open segmental pediment with panel between inscribed FREE LIBRAR y topped with another small pediment. Above 2 small windows. The entrance has iron gates and a triple overlight with glazing bars. T o left 3 large round headed windows in moulded ashlar -surrounds with raised pilasters between. Above 4 small central windows flanked by large curved gables each with 4-1ight mullion and transom windows topped with flat moulded hood, above in each gable an ornate crest. Beyond to right a single door and above a small circular turret with a blind round window and carved panel band above. To left 2 tall cross casement windows with paired pilasters between, above 2 round headed windows in moulded ashlar surrounds each topped with a pediment and prominent finial. North-east front has irregular facade with 2 bays to left similar to the main front. Rear section 3 storeys with plain and irregular glazing. INTERIOR has some original features including glazed tiling, panelling and moulded plaster ceilings. Large children's mural designed in 1931 by Herbert Wood.