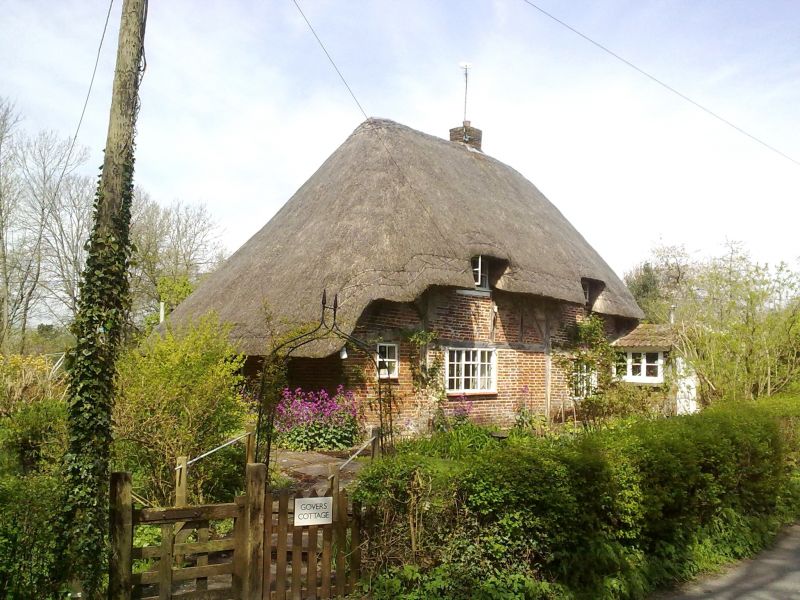 House. C17 of1656; or earlier C17, remodelled and extended in 1656; extended C18 and with C19 additions and C20 alterations. Timber-framed; infilled, partly rebuilt and extended in brick. Thatched roof with hipped ends. Brick axial stack. PLAN : 2-room plan with lobby entrance in front of central axial stack. The left [S] bay was possibly originally a small1-room plan house, open to the roof, and with a fireplace in a stack on the right [N] end [now the central axial stack], and a floor inserted in 1656 and the right bay added. In about the C18 an outshut was built at the left end and in the late C19 outshuts were added at the rear and at the right [N] end. EXTERIOR: 1 storey and attic. 2-window east front. 2 and 3-light casements with glazing bars, smaller attic casements in eyebrow eaves. Small 1-storey outbuilding projecting on right. On left the roof is carried down over brick outshut on end and around rear corner. Circa late C19 brick outshut at rear and flint outshut on north end, both with pantile lean-to roofs. INTERIOR: Left room has slightly cambered chamfered axial beam with cyma stops and exposed unchamfered joists; large brick fireplace with adzed and slightly cambered chamfered timber bressumer with run-out stops; over the fireplace a chalk tablet inscribed R 1656 B'; oven removed. To side of fireplace cupboard made from boards from lobby partition, with scratch mouldings. Painted on side-girt at rear of left room is the date 1660. Right-hand room rough unchamfered exposed joists. Winder stairs beside stack, turned around. Left [S] chamber ceiled, but has exposed frame in end wall with queen-posts and straight wind-braces. Doorway at head of stair , its head cut through soffit of tie-beam of central truss. Right-hand bay has collar, clasped purlins and small saddle nailed at apex.