A Grade I Listed Building in Athelhampton, Dorset 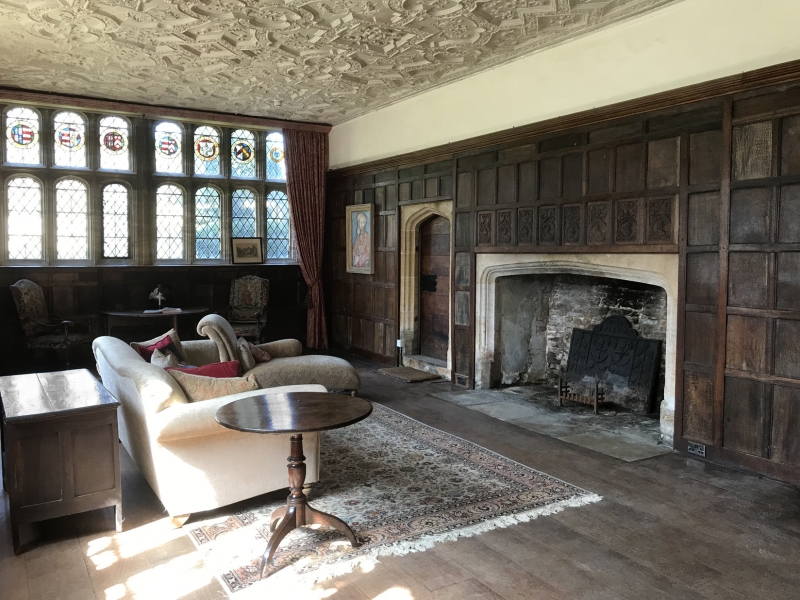 Church of England Parish: Puddletown with Athelhampton and Burleston St Mary the Virgin

Manor House with formal gardens. Begun 1493, by Sir William Martyn and
continued by his heirs during C16, including the west wing. In the C17, the
C15 service-range was remodelled and heightened, masking a window in
south-east gable of the hall. Gate-house and the connecting walls were
pulled down in 1862. Late C19, ranges of buildings to the north east of the
Hall were demolished. 1891 house bought by A C de la Fontaine and carefully
restored: south east range remodelled and extended. 1920's solar was
reconstructed including a stair leading to it from an original archway in
the north west side of the hall; new range built on the north east side of
the inner court. Ashlar-faced external walls are mainly limestone and
greensand with Ham Hill stone for the dressings. Clay tile roofs with
larger stone slates at the eaves courses, stone gable copings with heraldic
finials. Full architectural descriptions in RCHM of which the following is
a summary. S W Front, late C15 and early C16, porch, wall and oriel and end
of service-range to south. Plinth and castellated parapet. 4-sided hall
oriel, buttressed and with paired transomed lights in pointed heads; lower
castellated parapet. 4-light hall window with central buttress carried up
as a supermullion. 2-storey porch with splayed corners with attached
angle-shafts. Pointed arch entrance with label. 2-light window in square
head over. Label with head stops. South of this the gable end wall of the
service range, ground floor 3-light window, square headed with ovolo
mouldings and label with re-used head stops; first floor, similar window of
four lights, attic has another window of 3-lights. C17 openings probably
contemporary with the heightening of the range. The polygonal corner turret
is C15. West wing, mid C16, 2½ storeys, 3 windows and 2 gabled dormers.
4-light mullions, iron casements with lead lights, string moulding drops
each side of windows to form labels. Returned labels over first floor and
3-light windows to the dormers. West end of this wing is defined by
octagonal angle shafts concave-sided, the southerly stopped above former
forecourt wall. Mullion windows of 8:6:4 lights in gable wall, ground floor
light being transomed and with a supermullion at centre. Labels over, and
lozenge again under attic window. North wall is faced with coursed rubble.
To the east of a large chimney breast projects a gabled bay of 2 storeys
with a cellar and attic, with 3-light windows on each floor. Further east
are the windows of a spiral stair, that at the lowest level being square
headed with 2-centred lights under blind tracery. Obtuse re-entrant angle
beside this, where short stretch of C15 solar wall survives.

Section of C15 weathered gable survives above. East of this a rebuilding of
the solar-block in 1920's of 2 low storeys and an attic over, gabled.
Ground floor has a single light depressed arch window reset. First floor
has a canted oriel with trefoiled, mullioned lights and a flanking light
each side. Continuous string over and stone roof. Attic has a pierced
quatrefoil in square frame with label over. South east front: 2½ storeys,
irregular fenestration. It acquired an approximately symmetrical appearance
c1895 when east turret and the adjacent gable were built. Rubble wall face
up to level of first floor sills remains from C15 wing, as does the moulded
plinth. Most of stone work above is C17. Projecting bay at centre may
represent early chimney breast, now pierced by a 2-centred archway. Within
is a reset 2-centred doorway with ovolo mouldings. Behind the east turret
stands late C16 kitchen wing. East range, remains of C16 kitchen wing, thin
red and blue bricks with ashlar dressings, diagonal 2-stage buttress at east
corner. North of this the range was rebuilt in 1890's and 1920's, with 4:3:
and 2-light mullions with C20 metal casements and lead lights, doorway has
moulded stone jambs and depressed-arch head. On the west side of this range
is an extruding rounded stair well. Hall range was joined to C16 kitchen
wing by a C16 passageway which has been divided up internally, but which
retains doorways and window, now looking into 1920's pentice-roofed
passage. Interior: screens passage has original oak doors at each end,
decorated on the outside with moulded and cusped wooden tracery. Two
openings coinmunicate with the former service-wing. Oak screens partly late
C15 with C16 linenfold panels. Parapet a recent addition, hall, lined to
half its height with linenfold panelling brought from elsewhere. The east
and west windows have restored C16 glazing including monograms, and armorial
achievements. C15 open timber roof, occasionally repaired, arch-braced to a
high collar, with the bracing brought out to a cusp, moulded purlins and
cusped wind-bracing, for detail see RCHM. Oriel window with panelled
jambs. West wing: ground floor room has wide 4-centred arch fireplace,
above this are set eight carved wooden medallions of c1540. The moulded
plaster ceiling is a C20 reproduction. First floor room, panelling and
plaster ceiling are dated 1893. First floor of service range: state
bedchamber, C15 fireplace has a square head of Ham stone with moulded
soffite and jambs and a frieze of 6 quatrefoil ogee panels enclosing plain
shields, a vase and foliate bosses, spandrels are carved with conventional
foliage and heraldic emblems. The C17 oak panelling in four heights is
surmounted by a frieze with sea monsters. South turret now fitted out as an
oratory. For full internal description, it is necessary to refer to: (RCHM
Dorset III p9(2)ff. Country Life, Vol CLXXV May 1984 (3 parts)).