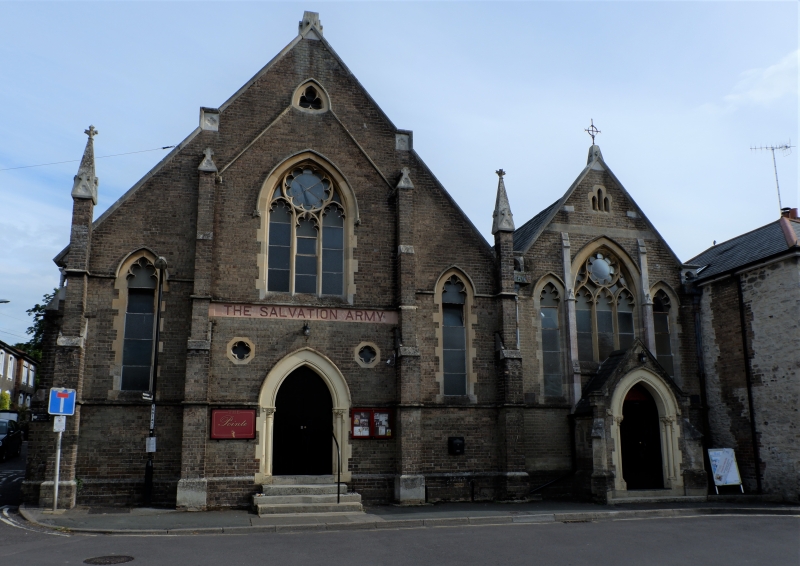 II
Former chapel of 1875 with late C19/early C20 additions, including a probable Sunday School built in a similar style.

MATERIALS:
It is constructed of brown brick with ashlar dressings under pitched roofs of slate.

PLAN:
It is roughly square in plan, comprising the former chapel on a corner plot, with ancillary rooms in a two-storey wing with basement to the rear, and an attached west range, probably a Sunday School.

EXTERIOR:
It has a two-gabled main entrance front (north). The left-hand gable has four buttresses, with pinnacles to the outer ones. The entrance is flanked by cusped single lancets with Early English tracery to the central window above and a spherical triangle in gable end. The entrance itself has a pointed-arched door with flanking colonettes (crocket capitals) taking a single roll moulding. The right-hand gable (former Sunday School) has similar windows but they are positioned adjacent to each other and are separated by very slender buttresses which rise from the entrance porch. The porch itself has diagonal buttresses and a similar door to that in the chapel entrance. The east elevation to Salisbury Street is more modest in appearance than the front. The bays are defined by buttresses and each contains a simple, square-headed window with ashlar surround and brick relieving arch. The right-hand window dates from the second half of the C20; the others are boarded over. The addition to the rear has a large window of four-lights with cusped heads.

INTERIOR:
Not inspected (2010). Altered, but understood to comprise two single-storey halls with arch-braced roof trusses carried on corbels to the former chapel. The windows to what was previously the external, west wall of the chapel remain visible, but the openings have been blocked, probably when the building was extended westwards.

HISTORY:
Durngate Street lies at the centre of the town of Dorchester and is shown as being almost completely built up on both sides in Hutchins's map of 1771; though the street also contains later buildings. The Primitive Methodist Chapel at the east end of the Durngate Street was extended prior to 1902 when service rooms were added to the rear. The building was further extended sometime between 1902 and 1929 when a hall, possibly a Sunday School, was added on the west side of the chapel. The building remained in use as a Methodist Chapel until the mid-C20; more recently it was used by the Salvation Army.

REASON FOR DESIGNATION:
This former Methodist Chapel on Durngate Street is designated at Grade II for the following principal reasons:

* Architecture: a good example of a late C19 Methodist Church with a well-proportioned principal elevation

* Interior: a former Methodist Chapel that retains evidence for its historic internal arrangement