A Grade I Listed Building in Hammoon, Dorset 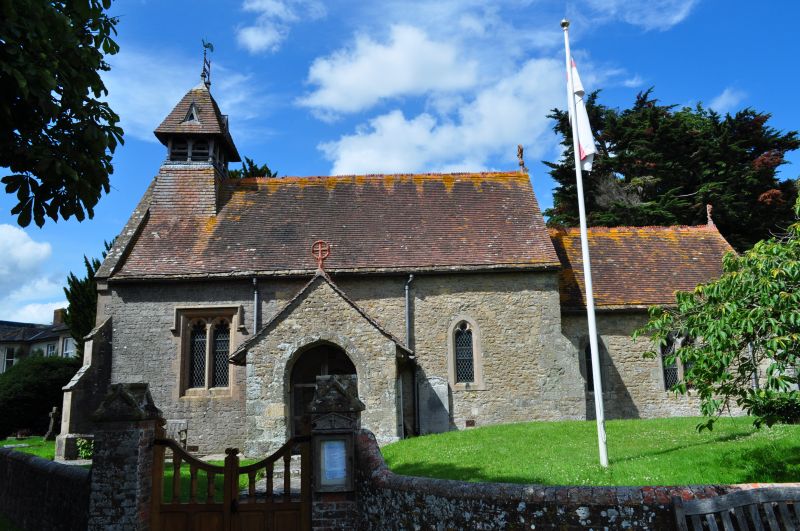 Parish Church, north nave wall late C12 or early C13. chancel and south
nave wall mid C13, partial refenestration and nave roof C15, porch C16 and
general restoration and west extension to nave 1885. Rubble walls with
tiled roofs, stone copings left. Plan: nave, chancel and south porch.
To the western end of the nave is a C19 timber and tiled, 'Arts and Crafts'
influenced bellcote. Chancel has original angle buttresses. South chancel
wall has a trefoiled lancet to the west and a double trefoiled lancet with
the head pierced by a quatrefoil to the east. The east chancel window is
a graduated triple lancet under a chamfered, pointed head. North chancel
wall has a C13 doorway with chamfered pointed head. South nave wall has
a C19 2 light, square-headed Perpendicular window with a returned label to
the west. East of the porch is a C19 trefoiled lancet. The north nave wall
has a C15 square-headed, 2-light, Perpendicular window to the east and a
C15 cinquefoiled lancet to the west. Centrally there is a blocked, pointed,
chamfered doorway besdie which is a C16 buttress. The C16 south porch is
tiled with a chamfered, round-headed arch. South nave doorway has chamfered,
segmental-pointed head.