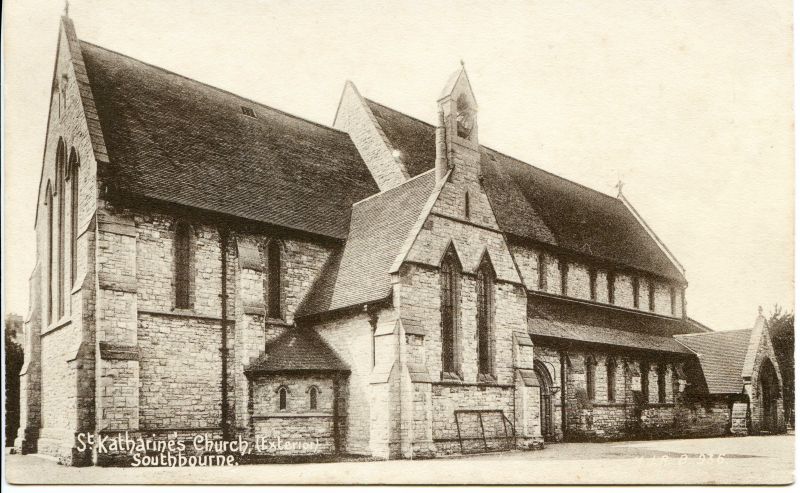 EXTERIOR: The church is large, but plain and severe. The style is E.E., with widely spaced single lancets in both aisles and clerestory. The west gable has a pair of two-light windows with a little tracery, and a statue in a niche between them. There is a west entrance beneath, with no porch or embellishment. The east end has three stepped lancets with continuous hoodmould. The transeptal organ chamber has a bellcote on the gable, and paired north windows.

INTERIOR: The aisle lights and east windows are treated alike, with moulded rere-arches joined by a string course, and in the jambs, E.E. style shafts of dark grey stone. The west windows and clerestory lights have no internal mouldings or shafts. The walls are plastered and painted, the arcades etc are of Bath stone. The nave arcades are of five bays with double-chamfered arches on alternating octagonal and cylindrical piers. The nave has an open roof with collar beams, the chancel roof is canted and boarded. The chancel is remarkably old fashioned for a design of 1899.

PRINCIPAL FIXTURES: The original reredos was replaced in 1916; Late Perp, of oak, with figures carved in Paris added 1918. The high altar (1905) is more striking, with a pierced traceried front including a big rose in the centre. Birt may have designed the altar, since he also designed a new font in 1905; of Caen stone on Portland base, marble columns. It is octagonal, with carved panels. The ogee openwork cover of 1907 was carved by a Mr Bower. The pulpit of 1903 was made by the firm of J.W. Mennell. Of Caen stone with Ashburton marble; figures added 1907. A big hanging rood was added in 1927, carved in the Austrian Tyrol. The stained glass is mostly by A.L. Moore, c. 1895-20s, but not all in the same style. His include the south chancel west, east windows, five in the south aisle, and the west windows, a War Memorial. One window at the north-west by C.E. Kempe, 1884. The chancel was reordered c. 1996-7, with pale oak altar rails, nave altar and new choir stalls. Moveable seats were installed throughout nave and aisles, probably at about the same date. The Buildings of England volumeon Hampshire reports an Arts and Crafts bronze inscription by Harold Stabler to Mary Buxton (d.1916).

SUBSIDIARY FEATURES: The site is somewhat constricted. To the south were a church hall (1904-5) and vicarage (1907-8), both by G.A. Bligh Livesay, of brick, William and Mary style. These were replaced by a vicarage of 1973, and church centre by Chapman Partnership, 1992.

HISTORY: Southbourne was begun in the 1870s by Dr Thomas Armetriding Compton, who bought 230 acres of desolate heathland on the clifftops east of Bournemouth for development. He provided a small temporary church-school opened on July 1, 1876, and gave the site for a permanent church. The architect, Alfred Birt of East Dulwich, London, was his brother-in-law. The foundation stone of the nave was laid on June 7 1881, and dedication of the completed nave was on May 30, 1882. It was consecrated in 1886, and a parish formed (from St James Pokesdown) in 1887. The east end was added 1899-1900. St Katharine was one of the many High Anglican churches established in Bournemouth in the late 19th century.

REASONS FOR DESIGNATION
The Church of St Katharine is designated at Grade II for the following principal reasons:
* A large and conventional Anglican church by Alfred Birt, from 1881.
* One of many Late Victorian High Anglican foundations in Bournemouth, this one closely connected with Dr Thomas Compton and the development of Southbourne.
* Spacious interior with well crafted fittings, mostly somewhat later than the church
* Stained glass mainly by A.L. Moore, of the early 20th century.