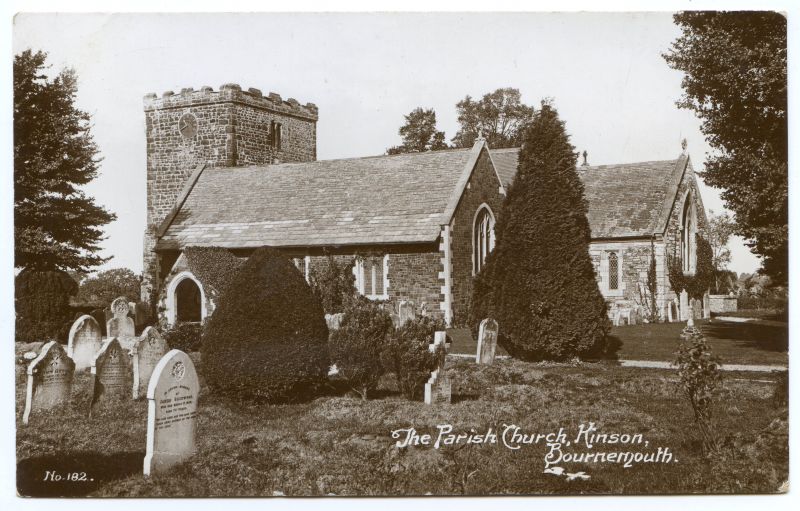 EXTERIOR: A village church of which the dominant feature is the short and extremely squat Late Norman tower. It is quite plain, without buttresses or any other adornment, and of two stages marked by a sloped set-off. There is another broader set-off low down on the west side only. In the lower stage is one small rectangular window on each face. On the north side is a small door, originally round-headed. The belfry stage has the same type set in pairs. Small embattled parapet, perhaps added in the 14th or 15th century. Aisles and nave are roofed separately under three almost even gables. The side windows of the aisles are in the Perp style, square-headed with cusped lights, and their east windows are of three lights with Geometric tracery. The chancel east window is very simple plate tracery, no doubt of 1875. The south porch is low, with a simple moulded entrance arch.

INTERIOR: The nave roof is of dark stained timber, with arch-braced collar trusses and small king posts. There are little dormers with quatrefoil lights like a clerestory; these are invisible outside, as they sit in the valleys behind the aisle roofs. Floors are of wood blocks with stone flagged walkways, and encaustic tiles in the chancel. The tower arch to the nave supports the Late Norman dating; it is pointed, with a single chamfer. In the tower room can be seen the very deep splays of the windows, and deep rope marks cutting into the head of the tower arch. The nave arcades are on octagonal piers with moulded capitals. The plain chancel arch with single chamfer and a blunt point is probably late 13th century. An inner arch of similar form sits beneath the soffit of the outer one: this may have been added as reinforcement in the restoration of 1875 (reportedly a new chancel arch was inserted `below' the original one).

PRINCIPAL FIXTURES: The chancel fittings are very simple, altar rail with wrought-iron stands, and a 17th century style communion table. The only medieval fitting is the octagonal font, perhaps 12th or early 13th century, of Purbeck marble. It has four small cusped arches on each face, possibly cut later. A new pulpit was given in 1898; of oak, with openwork tracery and dense leafy foliage. It has a stone base. The nave and aisle seating is pitch-pine benches of plain design, 1895. In the north aisle is the Hanoverian Royal arms on canvas, signed J. Taylor fecit. Probably later 18th century. In the south aisle, a Commandment Board painted on timber, to look like an open Bible. Similar Creed and Lord's Prayer, painted like scrolls. All may date from about the time of the enlargement of 1827. Nearby is a Biblical text painted on a timber panel, probably 18th century: it has a naive scrolled border with a cherub¿s head. The east window has stained glass of 1875 in the style of Clayton & Bell, with unusually bold perspective for that date. The south aisle east window depicts the Light of the World and saints, 1895. Also in the south aisle, a good two-light window probably c. 1895-1910, with St Michael and St Gabriel.

HISTORY: The Medieval structure consisted of west tower, small nave and chancel. His was enlarged with an additional 150 sittings in 1827, by the addition of a west gallery, and a transept-like range at right angles on the north, as big as the nave. This too had a gallery. Two small extensions were added at unknown dates flanking the east end of the nave. Each contained a private pew for about 6 people. The restoration of 1875 was paid for by the Fryer family, who also gave most of the glass. They were bankers and attornies, but descended in the female line from the well-known Dorset smuggler Isaac Gulliver (1745-1822), through whom rumours of stored contraband attach to the church. In 1894 it was decided to remove the nave and north range completely and build a new nave and aisles. A faculty was granted on June 7, 1894, and the church reopened on May 31, 1895. The village of Kinson was absorbed into Bournemouth in 1930.

William H. Romaine-Walker (1854-1940) was a London architect who was in partnership with A.W. Tanner 1881-96. He designed several buildings in south-east Dorset.

REASONS FOR DESIGNATION
The Church of St Andrew is designated at Grade II* for the following principal reasons:
* A village church with Late Norman tower of rustic simplicity, and an Early English chancel.
* Good Purbeck marble font of the 12th or early 13th century, with later blind arcading on the sides.
* Rebuilt aisles and nave of 1894-5, by W.H. Romaine-Walker
* Victorian and later stained glass given by the Fryers, a prominent local family.
* Kinson has become a northern suburb of Bournemouth, with the church and its village enclave forming an important link to the pre-urban history of the area.