A Grade I Listed Building in Marldon, Devon 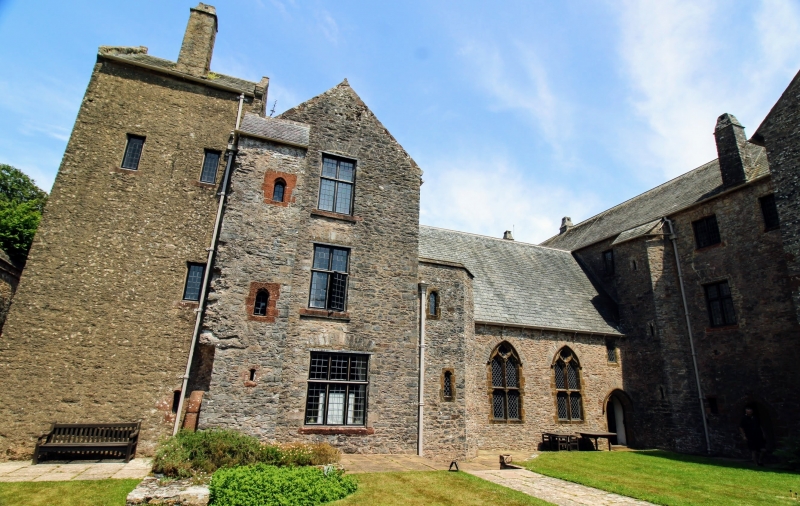 Medieval fortified house, seat of the Gilberts and property of the National
Trust. Circa 1320 manor house with work of circa 1450, extended and fortified
in circa 1500 to early C16. Restored circa 1930-55. Hall rebuilt 1954-5.
Built of local limestone rubble with red sandstone and white Beer-stone dres-
sings and granite corbels, lintels and copings. Slate roofs. Only parts of the
screens passage survive of the early C14 four-bay hall which was reconstructed
in C20. At the west end the solar and withdrawing room with a polygonal bay
window to the west, a large tower on the south west and a chapel projecting at
right angles to the hall to the north west are all circa mid C15. The chapel
has Perpendicular four-light windows and a pointed turned vaulted roof with a
priest's room above. At the east service end of the hall the buttery and pantry
and offices including angle towers to the north east and south east and the
kitchen wing to the south east with another tower on the south east corner are
all circa 1500. Also of circa 1500 is the north front wall in line with the end
of the projecting chapel and service wings which forms a small court in front of
the hall. This front elevation is almost symmetrical and has a contemporary
corner tower to the right hand (north west) to balance the left hand (north
east) tower, both gabled (although in different directions) and with corbelled
oriels. The main portcullis entrance is slightly to left of centre with its
corbelled machicolations and battlements to the high courtyard wall, the
Perpendicular north window of the chapel on the right hand and the service room
to the left. To the far left another portcullis to the postern gateway. Outer
walls to the east, west and south with another tower on the south east corner
circa early C16. All the towers are square with gabled roofs. Compton was
abandoned by the Gilbert family in circa 1750 (in favour of Sandridge, Stoke
Gabriel q.v.) and became a farm. It was bought back by the Gilberts in C20.
As well as reconstructing the hall Compton was thoroughly restored. Originally
the land was held by the Comptons. Joan daughter and heiress of William de
Compton married Geoffrey Gilbert who built the house in circa 1320. It was the
home of Sir Humphrey Gilbert the explorer and navigator who annexed Newfoundland
in 1583. Sir Humphrey Gilbert was half brother of Sir Walter Raleigh.
References: Country Life, volume 170, page 1546, 5 November 1981. Transactions
of the Devonshire Association, volume 88, pages 75-85. National Trust Guide
Book, 1952.