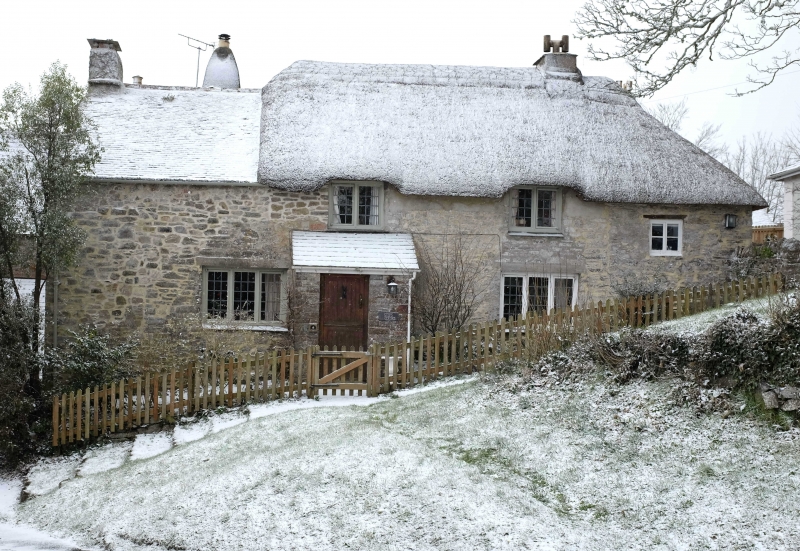 House. Circa 1500, remodelled in circa early to mid C17, extended in c18
or early C19 altered in C20. Local limestone and slate rubble. Thatched
roof, hipped at higher right end and gabled at lower left end; the left
end section has scantle slates and consequently slightly lower roof line.
Chimney stack of either end, the right-hand stack is now an axial ridge
stack because of the extension at the right end; projecting rendered
lateral stack at the rear left incorporated into a stair turret and with a
tapered shaft.
Plan: the original plan and later development is uncertain. However the
house was certainly open to the roof from end to end and divided by low
screens, probably 2 rooms and a central through passage, the large lower
end room to the left. Whether the floors were inserted in phases (the
right hand end first) is not certain but in any case the floors seem to
have been put in early to mid C17 and a lateral stack built at the back of
the lower left-hand room with an integral stair turret which partly blocked
the back doorway of the through passage. The screen on the lower left side
of the passage was replaced but installed further to the left creating a
wider passage to allow access to the newel stairs from the passage. The
left-hand rooms lateral stack at the back has an oven. The right-hand room
is heated by a fireplace on the higher end wall which may have been put in
when the floor was inserted. The lower end stack serves the chamber over
this end. In the C18 or early C19 a 1-room plan extension was added to the
higher right-hand end.
Exterior: 2 storeys. Asymmetrical 3-window range the right-hand window in
the extension. C20 2- and 3-light metal casements with leaded panes in
wooden frames. Small late C19 2-light casement to right. Doorway to left
of centre with C20 stone porch with a lean-to slate roof. The lower left
end had 2 C18 or early C19 2-light casements with leaded panes on the first
floor and a later C19 3-light casement on the ground floor.
Rear: Projecting lateral stack and rectangular stair turret enclosed
within C20 outshuts. At the back of the lower end a short parallel range
which belongs to a later adjoining house.
Interior: Plank and muntin screen on the higher right side of the passage
has chamfered muntins. The plank and muntin screen on the lower left side
of the wide passage is later and has scratch moulded muntins like some of
the joists over the passage which are also scratch moulded. Both screens
have been repaired and the lower left-hand screen partly removed. The
right-hand room has a chamfered joists on its higher right side have
pyramid stops with notches on the pyramids. The lower left-hand room has a
chamfered cross-beam and a half-beam with hollow step stops. The rear
lateral fireplace in the left-hand room has a timber lintel with a stopped
chamfer, stone rubble jambs and a clay bread oven. The fireplace in the
higher end room has been narrowed and its lintel raised. The newel stairs
has wooden treads and a blocked window.
Roof: 2 trusses, smoke-blackened on both sides, have morticed apexes,
morticed cracked collars and threaded ridge-piece and purlins; the purlins,
ridge-piece, rafters, battens and thatch survive between the 2 trusses, all
heavily smoke-blackened. The trusses are raised cracks, their feet
embedded well down into the walls. There are extra trusses inserted at the
lower end; they are clean and have morticed apexes and the purlins rest on
the backs on the principals. The roof over the right-hand end extension
was not inspected.