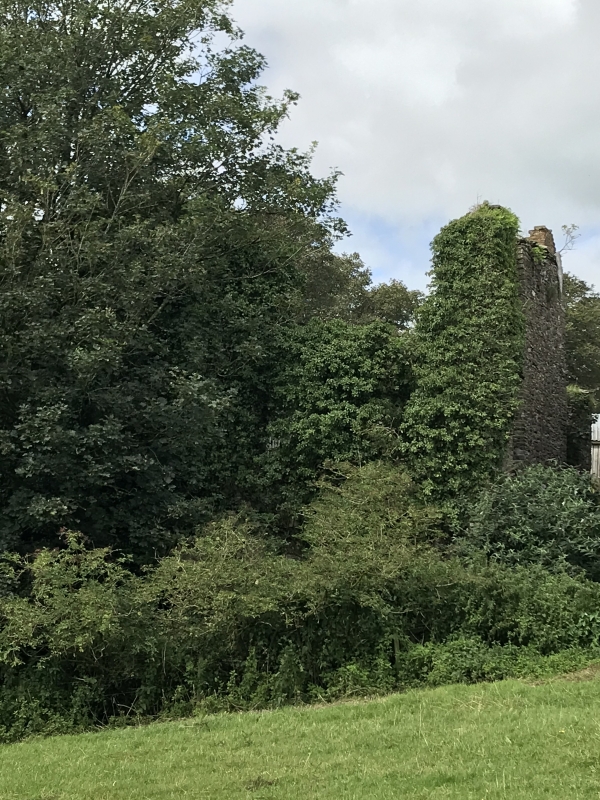 Ruins of country house in farmer wall landscaped park. C18, possible with
earlier remains, remodelled in C19 and later gutted by fire and now a
roofless ruin. Dressed slate rubble.
Photographs in the National Building Record of drawing and sketch plan of
the house how a 7-bay south east front range with 2 principal rooms (drawing
rooms on right dining room on left) and a central entrance. The C19
remodelling involved reorientating the house and the formation of a large
stairhall at the back with an entrance porch on the left (South West) side
in Gothic Style: The services were in ranges at the back.
What now remains is roughly L-shaped on plan, the services having been
destroyed. The front (south east) range, originally with a hipped roof and
modillion eaves cornice, has a symmetrical 3-storey 7-bay facade, the top
storey and heads of first floor windows have collapsed. There is a
stringcourse at first floor level and a fine limestone Doric portico with
engaged columns, triglyphs in the frieze and triangular pediment. The left
hand return has a 2-storey gabled projection with a large 3-light Gothic
style window lighting the stairhall with Perpendicular tracery and a porch
below with a chamfered 4-centred arch. To left a gable with a projecting
stack terminating in a square cap and short round pillars.
Also in the National Building Record is a photograph of a drawing of the
drawing room showing a late C18 interior with a Neo-classical moulded
plaster ceiling and chimneypiece.
Oldstone was probably an C11 estate (Hoskins). It was the seat of the
Cholwiches, who rebuilt the house in the C18.
Source W G Hoskins, Devon, National Buildings Record.