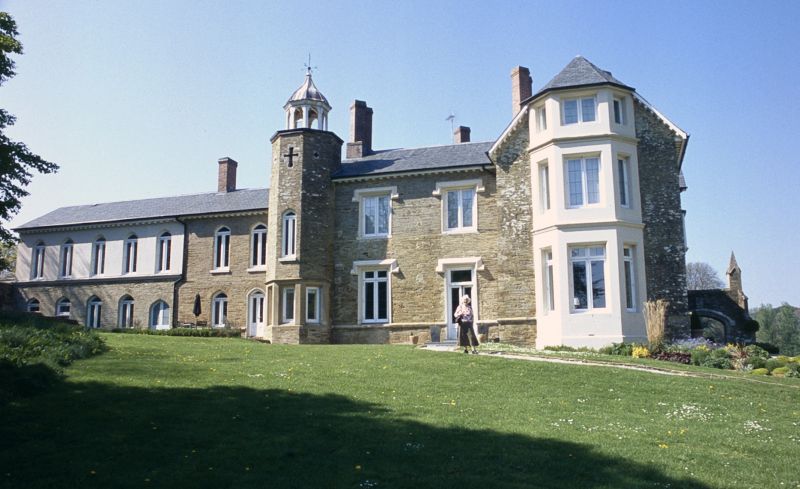 House, now used as a school. 1810-15 rebuilding of the medieval house,
incorporating some C16 and C17 features remodelled and enlarged and
enlarged again circa mid and later C20. coursed stone rubble. Steeply
pitched slate roof with shaped barge boards to verges of half-hipped gable
ends and exposed rafter ends to eaves. Axial stacks with diagonally set
brick shafts.
Plan and development: The existing house has a front (north-east) main
range with 2 principal rooms and a central vestibule leading to a stairhall
behind in a central wing flanked by two wings, the left hand wing containing
the famous ballroom and the right hand wing the services. This arrangement
is largely the result of a substantial remodelling and enlargement in 1849
of the earlier C19 (1810-15) house of which the rear wings might be part.
In 1947 the house became a school and the rear wings were extended. The
Headmaster's accommodation was built in the left side later in the C20.
The house is built near the site of the ancient Fortescue house a few
fragments of which are incorporated. The medieval house was still standing
in 1727 when Edmund Prideaux depicted it in a drawing as a large medieval
hall facing a courtyard flanked by what looks like later ranges.
Exterior: 2 storeys and attic. Symmetrical 2:1:2 window east front, centre
advanced and gabled both reused moulded 4-centred arch granite doorway,
granite string and oriel on reused carved brackets. There is also a reused
moulded granite string at ground floor window sill level. The windows have
been replaced in C20 but original with straight hoodmoulds intact C19
panelled and glazed gothick door at centre. The right and left hand ends of
front range have full-height later canted bays. On the right hand (north
east) corner a carriageway with a moulded granite 4-centred arch from the
old house with a hoodmould and arms above and butresses and pinnacle at
end.
The left hand (north) elevation has polygonal stair turret at centre with
arrow loop and wooden cupola; 2 windows to right similar to those at front
and 4 centred arch windows to left. The right hand (north) elevation has
similar window to those at front except for one ground floor window which
retains C19 mullion-transem frame and had arid above on carved brackets; and
in the roof a row of hipped dormers C20 extensions at rear but central
gable has 4-centered arch stair window.
Interior: The entrance vestibule has fine late C16 or early C17 panelling
with arcaded panels, strapwork cartouches with arms, carved anthemion and
other motifs; the frieze has trailing vines, rosettes and pegasus carving
and a complicated guilloche motif. Apart from one C18 2-panel door in the
service wing all the other features are C19. There are numerous early C19
panelled doors and the servants staircase is also C19. The stairhall and
landing above have large moulded 4-centred arches with clustered shafts.
The open-well, open-string staircase has arcaded thick balusters and moulded
mahogany handrail wreathed over clustered shafts at curtail and tread ends
with quatrefoils and mouchesttes. The front left hand room has moulded
modillain cornice and late C19 Devon marble chimneypiece with colonnettes.
The front right hand room has triple 4-centred arch chimneypiece. Rear left
hand ballroom (now commonroom) has colonaded screen at back. Rear right
hand room in rear left hand wing has Gothick moulded plaster frieze, moulded
plaster brackets on ornate corbels and brown marble chimneypiece a front
left first floor room is probably C19.
Historical note: The Fallapit or Valeput family possessed the estate from
the end of the C13 or earlier. It passed to the Fortescues at the beginning
of the C15: In 1734 on the death of Edmund Nananiel Wells whose eldest son
took the name Fortescue. It stayed in the Fortescue family until the mid
C19 and was sold to william Cubitt (of the London building firm fame) who
might have been responsible for the 1849 remodelling. In 1925 the estate
was bought by Lord Ashcombe. During the Second World War it was used by
American servicemen and in 1947 it became a school.
Sources: Thomas (Fortescue) Lord Clermont, A History of the Family of
Fortescue, 1989 Edmund Prideaux, drawing of 1727 now at Prideaux Place,
Cornwall. Whites Directory 1878. Sales Particulars of 1925. W G Hoskins
Devon.