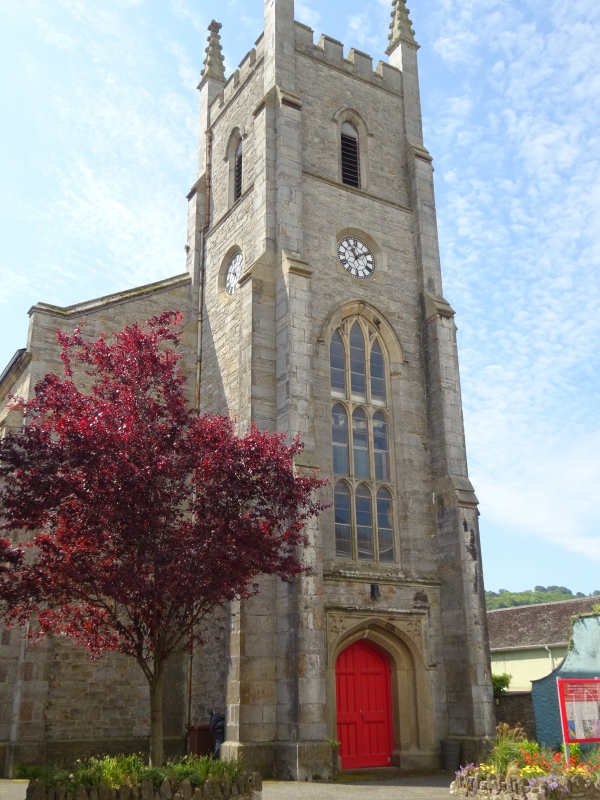 Exterior: The church is cramped between the terraced houses of Bridgetown as it climbs east from Totnes Bridge. The style is Perp Gothic of the Commissioners' type. Only the tower, rising above the roofs, is able to make any display, but in perspective it is set back from the street line and thus largely hidden from view. The tower is tall and narrow, with angle buttresses dying back into the belfry stage. In the west face is a four-centred door under a square label with traceried spandrels. Above, a very tall three-light window with two transoms and uncusped tracery. The belfry has an uncusped lancet in each face. Embattled parapet with crocketed angle pinnacles. The sides of the nave have five tall windows divided by buttresses, their mullions and tracery replaced c. 1980 with steel frames. The shallow chancel projection has its own embattled parapet, diagonal buttresses and a five-light Perp east window, with a transom but no cusping. The roof was renewed c. 2002.

Interior: The fire of 1976 destroyed almost everything within, including the roof. The rebuilding avoided any attempt at reinstating old features. The space was divided by a broad steel-framed staircase and meeting rooms at the western end, and an extra floor was inserted to create a large meeting hall above the worship space. The finish is fairly basic: old rubble was left exposed and painted, new walls are of painted plaster. The worship space is approached through double glass doors from the west.

Principal Fixtures: The only original fitting left is the stone reredos, a blind screen of six Perp arches. The altar, rails, prayer desk, lectern etc are in plain pale oak, as is the upholstered seating, all of 1980. Rather geometrical organ case with pierced panels. The east window, of which the top half is obscured by the inserted ceiling, is glazed in vivid abstract colours, by Peter Tysoe.

History: St John the Evangelist, Bridgetown was built in 1832 by Edward Seymour, eleventh Duke of Somerset, for his estate tenants. A chapel of ease to Berry Pomeroy, it cost £7,000. It had galleries on three sides, and seated seven hundred. The original architect appears to be unrecorded: one John Reeves reportedly did much architectural work for the Duke of Somerset, and another contender might be J.W. Bentall, surveyor, who designed a rather bald Gothic north aisle and galleries for St Mary, Totnes, 1823-6. The Duke appointed as curate the Rev. James Shore, a radical preacher whose sermons attracted many dissenters. When a new vicar of Berry Pomeroy was appointed in 1841 Shore's licence was not renewed and Shore came into conflict with the Tractarian Bishop of Exeter, Henry Philpotts. The chapel was closed in 1843 for five months. Seven hundred parishioners signed a petition and in 1844 the church was re-opened as the first Independent Free Church in England. Shore continued his popular ministry until 1862. In 1869 the church returned to Church of England and was refurbished in a more conventionally Anglican fashion, with a full width Gothic chancel screen including a pulpit. These fittings were extant in 1944. St John became part of the parish of Totnes in early the 1970s, and was gutted by an arson attack on July 9, 1976.

Reasons for Designation: The church of St John, Totnes, is designated at Grade II for the following principal reasons:

* A Perp Gothic church, 1832, of the Commissioners' type, though privately funded by Edward Seymour, Duke of Somerset, for his estate workers.

* Robust local stone and a dominant tower with tall slim pinnacles, forming an important visual focus for this part of Totnes.

* It forms a central element in the historic context of Bridgetown, surrounded by good housing of similar date, much of it also built by the Seymour estate.

* Its early years under the Rev. James Shore case interesting light on the evangelical wing of the Anglican church.