A Grade I Listed Building in Bickleigh, Devon 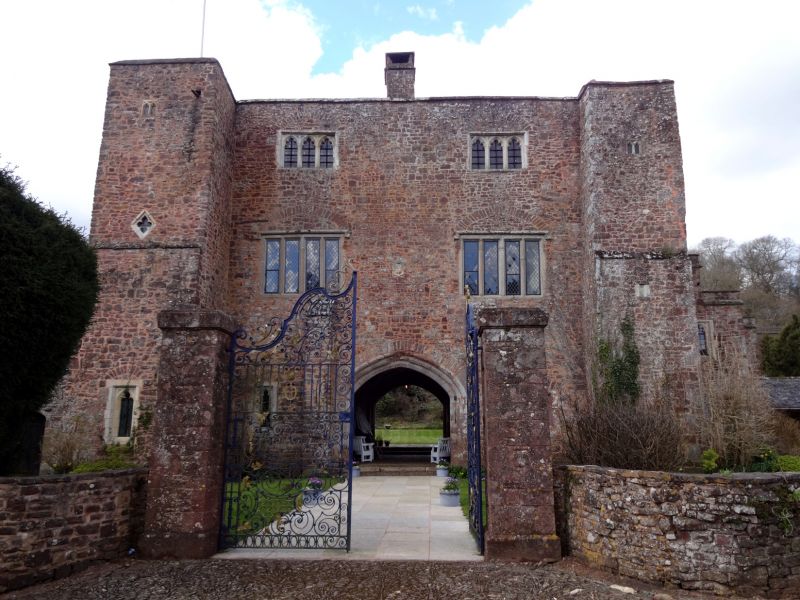 SS 90 NW BICKLEIGH
5/1 Bickleigh Castle Gatehouse
GV I
Gatehouse range of fortified manor house. Circa early C15 with C16 and C17
alterations; renovations of the 1920s and 30s. Volcanic trap rubble with some
Beerstone dressings; asbestos slate roof behind parapets; end stacks and front
lateral stack.
Plan: East-facing range of what was once a substantial complex of buildings with a
courtyard to the rear of the gatehouse. The west range has now disappeared above
ground; the south range (Old Court, q.v.) is now a separate property; the north range
is separately listed. There is plainly a long history of evolution and addition to
the manor house complex and the surviving buildings, of which the gatehouse is the
most imposing, may only be a fragment of what may once have stood on the site.
Single-depth 3-storey plan to gatehouse (2nd storey incomplete) with a circa early
C15 vaulted central entrance with heated ground floor rooms, one to the right. A
large first floor room, probably originally divided into smaller chambers, is heated
both by the front lateral and the right end stack. Projecting rectangular turrets on
the front at the left and right: the front left turret contains a stair, the right
hand turret may have served as a garderobe. Similar rear turrets. Adjoining the
south west corner of the range is a rounded, ruinous stair turret which appears to
have been part of a linking block between the gatehouse range and Old Court (q.v.).
There have been various suggestions for the building sequence of the range. The
house became the property of the Courtenay family in circa 1400 d. 1681. It passed
to the Carews in the early C16. After the civil war Sir Henry Carew is said to have
reconstructed the range (armorial bearings over western arch), and the gateway may
have been reconstructed or constructed at this date. Substantial restoration work
was carried out in the 1920s and 30s including raising the left turret to the second
storey and introducing newel stairs into both the front turrets.
Exterior: 2 storeys but with the remains of a third storey in an additional tier of
windows in the parapet, rear elevation 2 storeys. Approximately symmetrical 2 window
front with a triple-chamfered depressed segmental arch flanked by pilaster
buttresses. 2 first floor 4-light mullioned windows, probably C17, with chamfered
mullions, relieving arches, hoodmoulds and label stops. 2 second floor windows,
possibly C15, with cinquefoil-headed lights, stanchions and saddle bars. Arms of
Carew impaling Courtenay over the gateway.
The rear elevation, facing the courtyard, is approximately symmetrical with the
gateway arch in the centre flanked by 3-light Ham Hill windows with trefoil-headed
lights and relieving arches, probably part of the 1930s alterations. 2 large first
floor 4-light mullioned windows, similar to those on the east elevation. The right
hand turret has a lean-to roof and both turrets have cusped lights. The south end of
the building has a blocked first floor doorway which presumably led into the rounded
ruinous stair turret which adjoins this end.
Interior: the gateway has 2 bays of chamfered rib vaulting carried on engaged shafts
with carved bosses with heraldic shields. Chamfered. 2-centred arched doorways lead
into the ground floor rooms from the gateway. The south room (the 'Armoury') has a
chamfered inner arch to the east window and a fireplace with chamfered jambs below a
re-sited Beerstone carving probably C16 of a demi-figure flanked by lion supporters,
some traces of ancient paint. The north room (the 'guardroom') has a panelled dado
with panelling of different dates, some with a frieze of strapwork ; a circa C17
fireplace with chamfered lintel carried on stone corbels. The C17 framed stair in
the north west turret has turned balusters a moulded handrail and onion-shaped
finials and pendants. The stair has been re-sited. The large first floor room has a
1930s chimneypiece to the lateral stack with a Tudor arch and the arms of Colonel
Jasper Henson. A gallery at the south end was introduced in the 1930s with Tudor
panelling. The north east turret is reached through a chamfered doorframe and
contains a drain arrangement.
An outstanding building connected with the Courtenay and Carew families.
"Bickleigh Castle, Devon", Country Life, vol. LXXV, p.p. 416, 442.