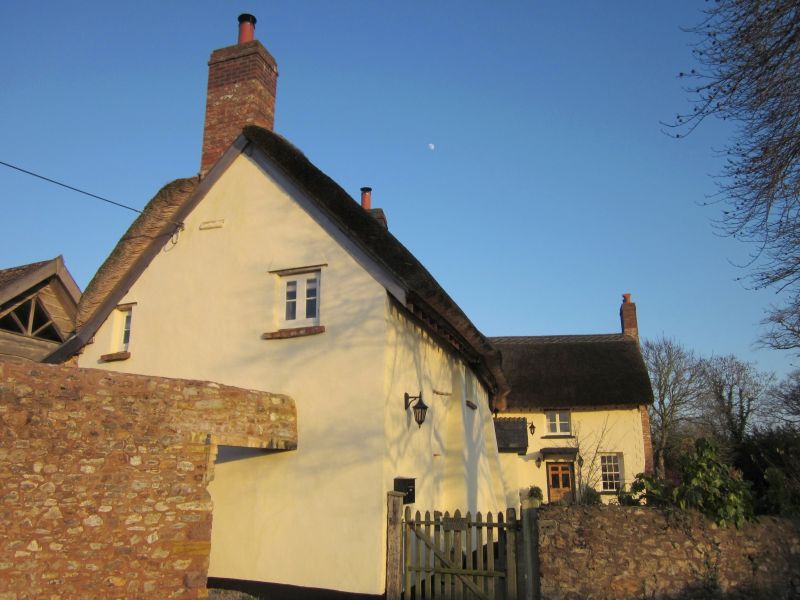 ST 11 SW UFFCULME
5/135 Lower Leigh Farmhouse
5.4.66
- II
Detached house, formerly a farmhouse. Possibly a C17 remodelling of an earlier
house, extended and refurbished in circa 1700, and again in the 1830s. Roughcast
cob and stone mix; gable end roof, thatched to front, pantiled to rear; pantiled
continuous outshut, largely of stone.
Plan: a puzzling house. Originally probably a 3-room, through-passage plan house,
the service end to the left of the passage. The roof has been almost entirely
rebuilt since the war, and the only early truss surviving is unlikely to pre-date
the late C17. However, the stack (now partially dismantled) gives every impression
of having been inserted into the passage, so that the present entrance leads into a
lobby, with a very narrow passage running behind the stack. An extension to the
service end was added, slightly out of alignment with the main range, and heated by
an internal end stack with bake oven. The original service end is heated by a deep
stone (formerly end) stack, also with bake oven, and with a recess for either winder
stairs or a smoking chamber. The hall presents several problems: the first floor
looks C18, and is at 2 levels, taller immediately forward of the fireplace then at
the higher end, a feature that forms a platform in the chamber above, about 48'
square, and 2' high. Its function is uncertain, but it creates 2 distinct spaces in
both rooms, probably reflecting different activities taking place in structurally
undivided rooms. C18 stairs have been inserted along the front face of the hall,
which are lit by a pair of contemporary pegged 2-light casement windows which,
externally, give the impression of being one tall window. A wing built to the front
of the inner room and heated by an external end stack, retains some mid C17 wall
decoration in the upper chamber, contemporary or a little earlier than the C17
joinery elsewhere. In circa 1831 (the date of an object found in the wall) a wing
was added to the rear of the inner room; it is wider than the front wing, allowing
for an axial corridor running along the lower-end side, which gives access to the
principal 1830 room from the old hall, by way of a short but elegant flight of
stairs - a satisfying and imaginative piece of design. 2 storeys.
Exterior: front: a real jumble; the paired casement windows to hall and hall
chamber (described above) to the right of a C19 timber porch with boarded gable; to
the left of the porch is an early tall C19 round-headed 2-light window, with
decorative glazing bars in the head; the lower part of this window has been
renewed, or extended, and it now straddles both floors. Left of this two large
buttresses, one of which partially conceals a piece of rusticated quoining; 3-light
casement window to service end chamber, set in a slightly projecting stretch of
walling. 3-light casement window to service-room extension, ground floor. Front
wing: one 2-light casement window to first floor inner face; C19 door flanked by
12-pane hornless sash windows to ground floor. Front angles in rusticated quoining.
Outer face of wing with 2 late C18 pegged 2-light casement windows, with a large 16-
pane hornless sash window lighting principal room of rear wing. The rear of the
axial corridor of this wing is lit by a round-headed sash window. C19 casements
elsewhere.
Interior: (1) mid C17 mural decoration survives (apparently largely intact) under
later panelling in the front wing chamber; where revealed it is made up of formal
floral patterning with a series of associated arcs. (2) Much joinery of circa 1700,
mainly large fielded panelled doors, including doors of wall cupboards, some with
brass H-hinges. (3) Ceiling beams, where exposed, have very shallow chambers or
bead mouldings, and look C18. (4) Some attractive early C19 joinery including the
stairs to the rear of the hall with ramped rails and turned newels: fielded panel
doors, and in the principal room of the rear wing, internal panelled sliding
shutters; panelling elsewhere.