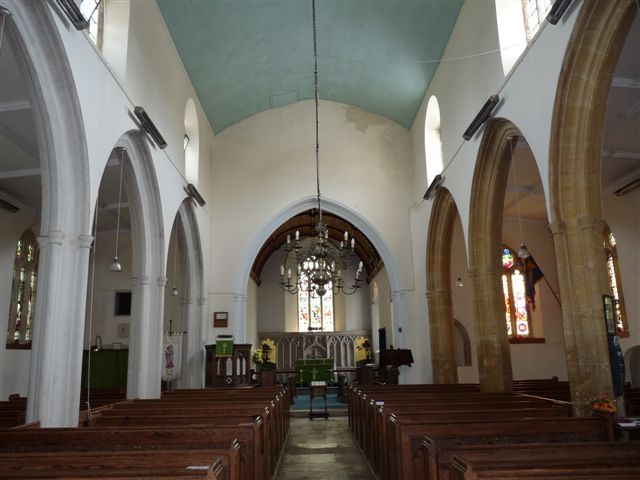 CULMSTOCK FORE STREET, Culmstock
ST 11 SW
10/48 Church of All Saints
-
5.4.66
GV II*
Parish Church. C15 but built in more than one phase, some may be as late as early
C16, renovated 1879. Local limestone rubble with larger more neatly dressed quoins;
Hamstone and Beerstone ashlar detail; slate roof.
Plan: nave with clerestorey (an unusual feature for Devon), lower chancel, north
and south aisles, west tower with semi-octagonal stair turret projecting from its
south-east corner. South porch. Baptistry projecting from north aisle. C19 vestry
on north side of chancel.
Exterior: tall west tower of 3 stages with set back buttresses and embattled
parapet with corner pinnacles (each one surmounted by a wrougnt iron weather vane).
The corner water spouts are carved as gargoyles. Hamstone belfry windows are 2
lights with Perpendicular tracery. On the west side is an original doorway; a 2-
centred arch of volcanic stone with moulded surround, now containing C19 doors.
Directly above is a tall 4-light Beerstone window with Perpendicular tracery.
Around the rest of the church all the windows have Perpendicular tracery; most are
C19 replacements but some are original. The clerestorey has an 3 2-light windows
each side. The south aisle has an embattled parapet which is carried round the
porch which interrupts tne 3 3-light Hamstone window front. The porch has a low
gabled front and a 2-centred Hamstone outer arch with moulded surround. The rest of
the windows are Beerstone. On the south side of the chancel there are 2 2-light
windows with a narrow priests door between, and at the east end a tall 3-light
window. The C19 leanto vestry has square-headed windows in Perpendicular style.
The south aisle has 3-light windows and there is a gabled baptistry projecting
opposite the porch and contains 2-light windows.
Interior: the porch has a vaulted stone roof with ornate carved boss of probably
late C15 - early C16 date although there is some suspicion that the porch is a C19
replacement. The south door is a 2-centred arch with moulded surround and contains
a C19 panelled door.
The nave roof is a plastered vault maybe as early as the C18. Both aisles have
similar low pitch leanto roofs of moulded intersecting beams with carved bosses.
The chancel has a C19 wagon roof with boarded back and carved bosses. The tower has
a late C15 -early C16 ringing floor carried on moulded intersecting beams.
Baptistry has a C19 roof. Tall plain tower arch. Each side of the nave has a 4-bay
arcade. Both have similar moulded piers (Pevsners type A) with moulded caps to the
shafts only. However the north aisle is built of Beerstone whereas the southern one
is Hamstone. A hagioscope connects the east end of the south side and the chancel.
Hamstone piscina in south aisle. Aisles and nave have stone flag floors. Chancel
and baptistry have floors of patterned C19 encaustic tiles.
The C19 Beerstone reredos is carved in Perpendicular Gothic style as a blind arcade,
the centre panel of which is more ornate. Trefoil-headed piscina in south wall.
C19 altar table. Sanctuary contains 2 C17 chip-carved oakchairs. C19 oak altar
rail on wrought iron twisted standards. C19 oak stalls in Gothic style, and pulpit
in similar style. C19 oak eagle lectern. C19 pine benches with ends carved as blind
tracery. C20 tower screen. At the time of this survey the font had been removed
for restoration.
No monuments of more than local interest. Painted board over tower arch of Georgian
arms. A plaque to rear of the north aisle records the "enlarging" of the church by
an additional 250 sittings in 1825. Some painted C19 glass.
The church plays an important role in the townscope of Culmstock and indeed in this
part of the Culm valley.