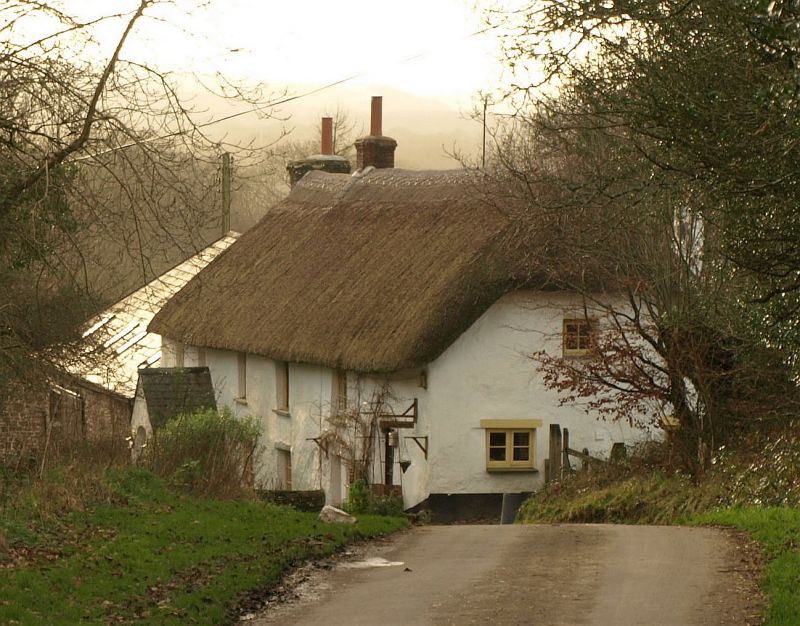 House, originally farmhouse. Circa early-mid C17, may incorporate some
earlier fabric; extended probably in C18 with late C18 or early C19 barn
attached. PIastered stone rubble walls. Thatched roof, gabled to left end,
half hipped to right. Slate roofs to outshuts at rear and barn. 3 stacks:
one projecting rubble stack at the left gable end with a brick shaft,
brick axial stack and lateral brick stack at rear.
Plan: 2- or 3-room and through passage plan - a solid apparently full-
height wall between hall and inner room makes the plan uncertain. Lower
end to the left. Hall heated by axial stack backing onto the passage,
lower room heated by gable end stack. Inner room unheated. Probably in
the C18 the house was extended by 2 rooms at the higher end, of which the
right-hand room was a small outbuilding. C19 outshuts added behind whole
length of house. Circa late C18 or early C19 barn added at left-hand
(lower) end. 2 storeys. Asymmetrical 5-window front of C20 casements all
with small panes except the first floor window above the porch. Windows
all 2-light except for the ground floor hall window to the right of the
porch and the window to its far right which are 3-light, the latter is
mid C20 metal-framed. Gabled C19 porch towards left end has C20 plank
door behind it. Towards right end is C20 part-glazed door into extension
and to the right of that a C19 plank door into the outbuilding. C19
outshuts extend along length of rear wall. At left-hand end of house is
long late C18 or early C19 barn whose roof is hipped at the left end. It
has a wide doorway to right of centre with a narrower door to the right
and several slit openings. Its corners are splayed.
Interior: According to present owner roof timbers consist of rough
straight principals which are closely spaced with lapped and pegged
collars - likely to be C18 or C19. The hall has chamfered cross beams
with ogee stops. The lower room has an C18 wall cupboard on its rear
wall which has an arched opening with moulded pilasters and curved
shelves. The original fireplaces have been reconstructed or concealed.
To include low wall with C19 iron railings and gate, and granite gate
piers, forming a boundary to a shallow garden area in front of the house
This building retains a traditional picturesque exterior and occupies a
prominent road-side position.