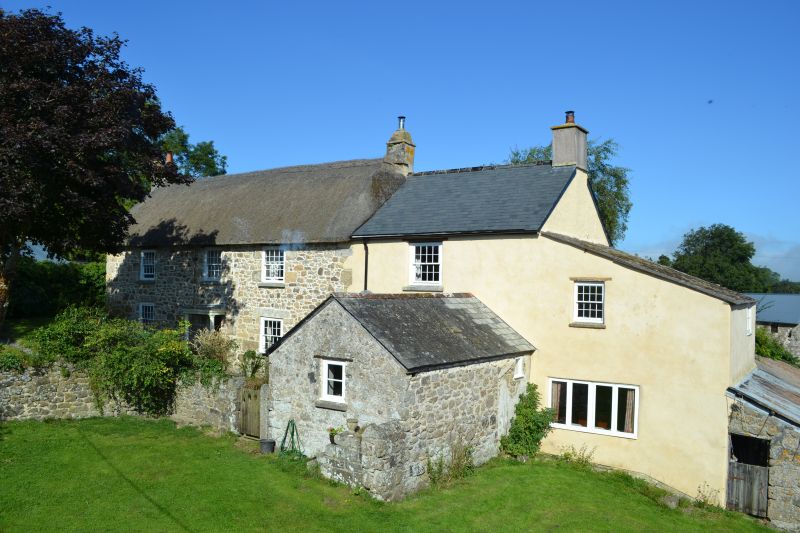 Farmhouse. C16 with C17 improvements; much rebuilt and rearranged in mid-late C19.
Plastered granite stone rubble; granite stacks topped with plastered C19 or C20
brick; most of roof is thatch but one end is slate.
Plan and development: It seems very likely the the original house had a 3-room-and-
through-passage plan built down the hillslope and facing south. It may have been a
Dartmoor longhouse. The hall at least was open to the roof and originally heated by
an open hearth fire. The hall has an axial stack backing onto the site of the
former passage. The inner room end is the uphill left end. It was rebuilt or
rearranged in the mid-late C19 and contains an entrance hall with staircase and a
parlour at the end with gable end stack. The passage service end was rebuilt at the
same time as a kitchen with a gable end stack. At the right end there is an
outshot. Dairy outshot to rear of the hall was rebuilt as the present kitchen circa
1970 and there is a C19 woodshed in front of the kitchen. House is 2 storeys.
Exterior: Irregular 4-window front although the left 3-window section is
symmetrical about the main doorway. There are 2 first floor C19 16-pane sashes but
most of the windows are now C20 casements without glazing bars. The main doorway
contains C20 part-glazed door behind a contemporary porch. Roof is gable-ended and
the thatch section coincides with the symmetrical 3-window section.
Interior: The early work is mostly confined to the hall section. The large C16 -
early C17 granite ashlar fireplace has a hollow-chamfered surround. Probably early
C17 ceiling and the crossbeam is soffit-chamfered with step stops. The Pear wall
contains an alcove towards the upper end which probably represents the blocked
doorway of the former newel stair. There is also a vertical timber in the wall
which is probably the foot of an original cruck truss. The roof was raised in the
C19 and therefore rebuilt but it does incorporte several smoke-blackened timbers and
one appears to be an intact reused truss, now an A-frame with its cruck feet cut
off. The rest of the features in the house are C19 although the jambs of the
parlour fireplace are hollow-chamfered and therefore may indicate a C17 fireplace
here.