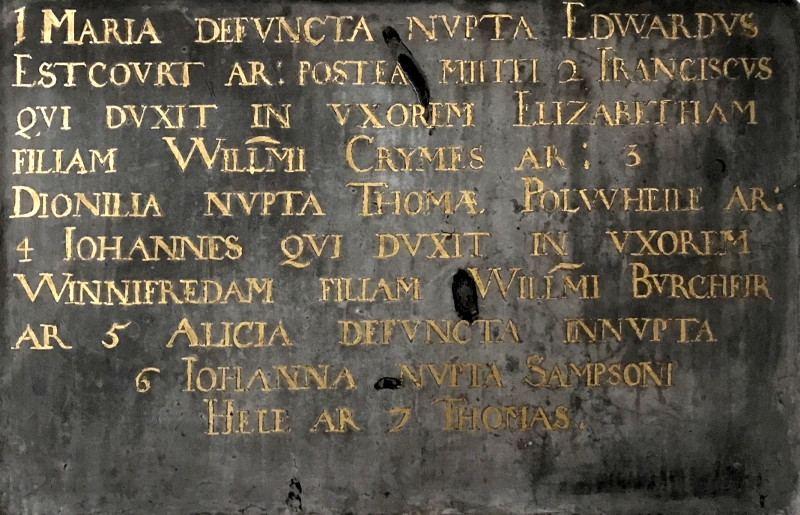 A parish church of medieval origin, restored in 1844-5 by John Hayward.

A parish church of C14 and C15 date, built on earlier foundations and restored 1844-5 by John Hayward.

MATERIALS: constructed of Hurdwick stone with granite or elvan stone dressings and slates, lead flashings, and a lead roof to the tower. The early church columns are of elvan (green) stone, and those in the C15 clothworkers aisle of Dartmoor granite. The roofs have timber ribs and bosses. The rainwater goods are cast iron and lead.

EXTERIOR: the aisles have large four-light windows with simple Perpendicular tracery and buttresses with offsets between them. The east end has a row of three gables, all with five-light windows. At the south-east corner the mid-C19 gabled vestries are of lower height and the north end of the clothworkers aisle has an opening reduced to two lights. The gabled south porch has an mid-C19 sundial above a four-centred arch door with quatrefoils in the spandrels. The east end of the north aisle has a mid-C19 projection for an organ, and at the west end is a small round-arched C14 stoup in the wall. The west tower has setback (B type) buttresses. The door and window openings have double rows of round arches over four-centred heads. A heavy, moulded band wraps around the tower at midway of door height above a plinth. The west face has a large four-light window above the door. At upper level is a clock to each face with traceried openings and ventilators above. The top of the tower has crenellated parapets and tall pinnacles to all four corners with square crockets. The hopper heads to the tower are dated 1661.

INTERIOR: the nave and aisles have tall, slender arcades with four-centred moulded arches with C15 carved bosses to the wagon roofs (including one with the regional motif of three hares). The clothworkers aisle is more embellished with some details relating to the guild. The mid-C19 pews have elaborately carved ends, one in the south aisle having a tiny ivory church mouse set within it. There are decorative cast-iron vents in the nave floor, which is covered in stone flags and setts. There is tiling to the chapels and the baptistry. The vestries have wood block floors and a C19 chimneypiece.

Bones, said to be those of Ordulf, founder of the Abbey (d.1015) are interred here, and there is an inscribed stone floor slab at the south end of the nave: ORDULF/ FOUNDER OF TAVISTOCK ABBEY/ 981. To the left, a further slab is inscribed in memory of other past abbots whose remains were found nearby and reinterred at the church: ABBOTS/ OF/ TAVISTOCK ABBEY/ RE-BURIED/ 2000. By the south door is the baptistry with a C15 octagonal font with shields in quatrefoils and a C14 oak iron-bound wagon chest, trapezoid in shape. In the nave is a carved Caen stone pulpit of 1846. Next to it, in the north aisle, is an organ and case of 1845, with carved statues of 1879, by J.W. Walker and Sons of London. The pipes and mechanisms are contained behind the case. To the left of the case, in the north wall, is a sealed ogee-arched recess, probably associated with a C14 chapel to John Dabernon and his wife. There is a C19 decorative screen separating the nave from the west tower. To each side, in the tower wall, are narrow doors to stairs leading to the aisle roofs.

The west tower has a narrow stone winder stair to a ringing chamber, bell chamber, belfry and roof. The doors are of oak. The church bells include eight of the C18, recast in 1925, and at least one bell by Thomas Mears of London Foundry (Whitechapel) of the late C18 or early C19. In the bell chamber is an automated winding and ringing mechanism, partly in a glazed timber compartment.

There is a variety of C19 stained glass across the church. The north aisle east window is by Morris & Co. (1876) and features evangelists, prophets, scenes from the life of Christ, and angels playing musical instruments. Below and to the right is an early door, probably of C14 date. The north aisle second from the east is by Kempe Studios, the third by Fouracres of Plymouth and the fourth by Dixon (the Carpenter window). The south aisle east window is by William Wailes and Co. (the Terrell window), second from the east by Ward and Hughes, the third form the east by Fouracres. The east window of the clothworkers aisle is by Powell, the first from the east by Mayer of Munich, the second by Bacon and the third by Clayton and Bell. The central east window of 1949 is by James Powell of Whitefriars Glass Company, and to each side of it are tablets inscribed with the commandments placed in highly decorated Caen stone niches. Other chancel windows are by Fouracres. The oldest window dates from the 1830s and is in the west tower, and by Ward and Hughes.

Monuments in the church include a large standing wall-monument in the north chapel to John Fytz (d.1590) and wife and son (d.1605), with recumbent effigies on a tomb chest behind columns. The son kneels behind. In the south chapel wall is an alabaster monument to John Glanville (d.1600) and wife. Glanville lies half-reclining in a tomb chest with his wife kneeling in front along with five children (their heads removed). There are a number of memorial tablets across the church (and exterior) including above the south door, to B. Carpenter (d.1782) and his family.

The parish church of St Eustachius has early-C14 origins and has been rebuilt, enlarged and enriched on the proceeds of the Tavistock cloth trade since then.

A church dedicated to St Eustachius was established on this site by 1265, and possibly as early 1193. It was replaced with a new church in 1318 by Abbot Robert Champeaux of the Benedictine Abbey of Our Lady and St Rumon, which stood immediately to the south. The Abbey was founded by Ordulf, Earl of Devon, by charter of King Edgar in 981. It was subsequently sacked by Danish invaders and rebuilt. The north/south passageway through the west tower of the church provided the main access point between the abbey precinct and the town, and the thoroughfare is shown in an early-C19 engraving of the church. There are references to further building work to the church in 1352 and 1380.

In the early to mid-C15, the church was partly rebuilt and enlarged with a new chancel at the east end. An additional south aisle was built in 1445-47, known as the ‘clothworkers aisle’ it was a bequest from Constance Coffyn, widow of three Tavistock cloth merchants. The tower was also raised around this time and the south porch built. The church acquired a number of ornaments, fittings and furniture during the C14 and C15, as shown in contemporary inventories, some of which remain in the nave including a font, parish chest and wagon chest. The Abbey was vacated at the Dissolution and fell into ruin.
From the C16 a number of memorial tombs and tablets were installed to the interior and exterior of the church, some of fairly extravagant detail reflecting the wealth in the town. A clock is mentioned in the Churchwardens’ Accounts of 1540, and the current clock was installed in 1769, paid for by public subscription and by a donation from the 4th Duke of Bedford. The Duke also donated 8 of the 10 bells that remain in use, and which were replacements for earlier bells. The church is recorded as having a ring of bells since the early C15. The Duke’s bells were cast by Thomas Bilbie of Cullompton and were re-cast and re-hung in 1925 by John Taylor of Loughborough. In addition, there is a late-C18 or early-C19 bell cast by Thomas Mears of London Foundry (Whitechapel).

Between the C17 and C19 further works appear to be limited to repairs (including rainwater goods of 1616), further ornamentation (a mid-C19 sundial above the south door) and additional memorials. A major restoration by John Hayward took place in 1844-5, which saw the construction of a new organ bay in the north aisle and vestries built to the south of the chancel. Also there were new pews, pulpit, organ and case and other fittings. Later in the C19 and early C20 new windows were installed, including work by Morris and Co. (the window is in memory of J.H. Gill of Bickham Hall, father of William Morris’s brother-in-law, and was designed by Morris and Burne-Jones) and Kempe Studios. In the late C20 and early C21 some minor alterations have taken place and a new south door installed.

The church of St Eustachius, Tavistock, a C14 church rebuilt in the C15 and adapted later including a major restoration in 1844-5 by John Hayward, is listed at Grade II* for the following principal reasons:
* Architectural interest: reflecting the high status of this former stannary town and wealthy trading centre, the church has a dominant Gothic presence at the heart of the town with characteristic and high quality architectural features and quality Victorian work by the notable architect John Hayward;
* Historic interest: as an early-C14 parish church with earlier origins in a major English market town with direct historic links to the adjacent abbey remains, itself of earlier Saxon origins, and for its many associations with important figures in the locality over its history including the Dukes of Bedford;
* Degree of survival: the church survives intact and with the main phases of its historic evolution legible in the fabric of the building;
* Artistic interest: the church also contains many quality works of stained glass by Morris and Company, Kempe Studios and others. Features of the 1845 restoration include a Caen stone pulpit, an oak organ screen and carved pew ends;
* Historic fittings: these are extensively of high quality. Of particular interest are the C14 water stoup, C15 roof bosses, the early-C17 Glanville and Fitz monuments, and the mid-C17 rainwater goods to the tower;
* Group value: the church has a prominent position at the centre of the historic town, with a close relationship to the site of its associated abbey precinct, the civic administrative centre of the town, and a number of other listed buildings, some at a higher grade, to provide a coherent group.