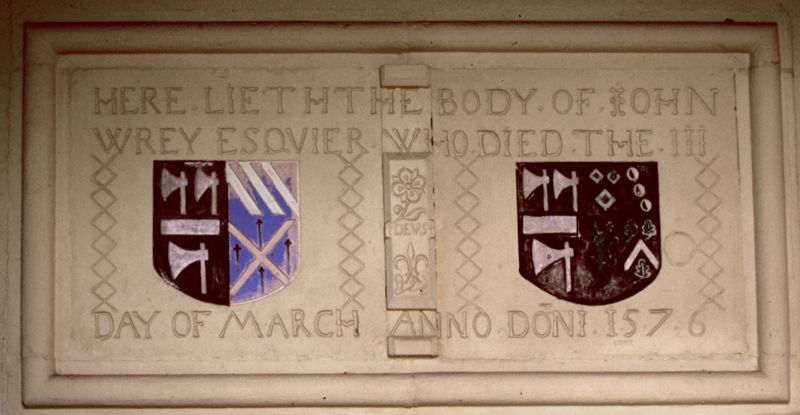 Parish church. C15, base of tower may be slightly earlier. Restored in circa 1820,
1866 and 1890. The tower is of local stone rubble construction, the aisles, porch
and chancel are of granite ashlar. The chancel has a gable-ended slate roof;
corrugated plastic sheeting to nave and aisle.
Plan: nave, north and south aisles, west tower and south porch. Mainly C15 but the
tower may have earlier origins. The church has suffered savage C19 restorations
starting probably in circa 1820 judging from the comments of Revd. Coryndon Luxmore
who wrote in circa 1820 "the church has undergone very considerable repairs within
the last 10 years" and went onto recount the "old windows were replaced by new about
4 years since" and "the tower lately has been raised many feet and is now 40" high
with battlements and pinnacles upon it". He describes the rood screen which was
then in situ but was removed in 1869. The chancel was restored and the vestry added
in 1866. The church was further partially restored in 1890 by Fulford and Harvey of
Exeter and in 1900 renovations were carried out to mullions and pinnacles and much
plaster was removed.
3-stage unbuttressed west tower, battered at the bottom. The top was rebuilt in the
C19 and is battlemented with pinnacles. The west window is in the Decorated style
and has a pointed arched doorway below - both date from the C19 restoration. The
north aisle has 4 granite ashlar buttresses between 3-windows which are all 3-light
C19 restorations in the Decorated style. Towards the right-hand end the head of a
wide blocked arch is visible. At the east end of the aisle is a similar style 2-
light window. Built against the north wall of the chancel is the vestry added in
1866. The chancel has set-back buttresses. Its east window is a 3-light C19
restoration with Perpendicular tracery. Similar 2-light window on south side of
chancel. The south aisle has a coved granite cornice and has identical windows to
the north aisle with buttresses between; blocked window to west of porch.
Gabled single storey south porch has round-headed granite doorway rebated in
chamfered surround with worn roll and hollow moulding and carving in spandrels.
Interior: The porch is floored with slates set on edge in small squares to form a
checker design. Completely restored wagon roof. 4-centred arched granite south
doorway with worn double hollow moulding. Both arcades have been completely rebuilt
in Perpendicular style. 4-centred chancel arch of Polyphant stone resting on
brackets. Unmoulded tower arch. The nave and aisle roofs are ceiled but probably
have wagon roofs although not necessarily original. The chancel has a restored
wagon roof.
The base of the screen has been preserved but in very fragmentary form, reusing the
tracery in the panels. The benches are all C19 or early C20.
On the north wall of the chancel is a good wall memorial of 1665 to Lady Honor
Calmady. There is a rhyming epitaph below the inscription. Either side of the
plaque is an Ionic column and there is a moulded cornice which breaks forward above
the columns; a heraldic shield rests above on each side with a more ornamental
shield and coat of arms at the centre. Set into the floor of the chancel is a slate
memorial slab to Thomas and Henry Burneford who died 1727 and 1757. Rhyming epitaph
and carved skull and cross-bones below flanked by a winged angel's head.
Sources: Beatrix Cresswell - Churches in the Deanery of Okehamnton; White's
Directory 1878: Kelly's Directory 1902.