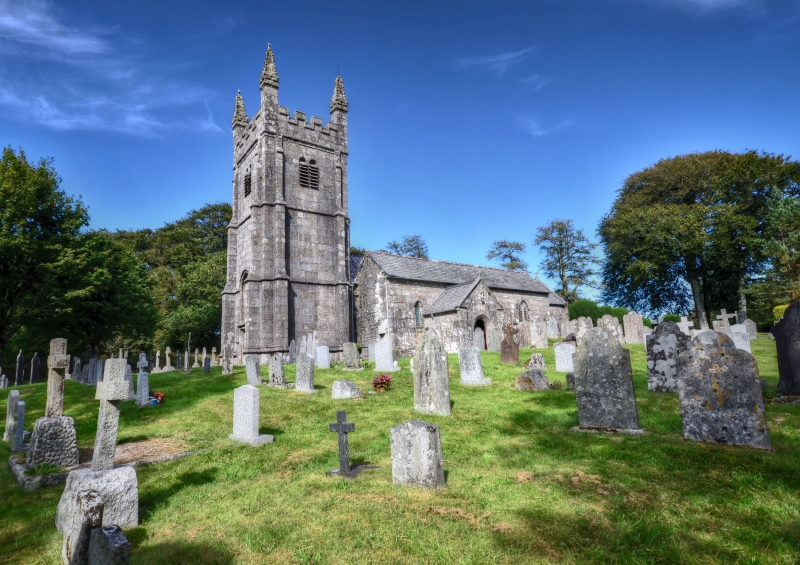 Parish Church. Main building periods are C13, C15 and 1889-90 when the church was
enlarged and restored. Constructed mainly of coursed granite ashlar with some stone
rubble. Gable ended slate roofs.
Plan: Nave, chancel, north and south aisles, west tower and south porch. The
earliest fabric survives in the chancel, the church was substantially rebuilt and
extended in the C15 when the south aisle and porch and the tower were added. In
1889-90 major restoration work was undertaken and the north aisle added.
Tower is of 3 stages with set-back buttresses and battlemented with crocketted
pinnacles. Heavily moulded west doorway with 4-centred arch and hoodmould. Late
Perpendicular 3-light window above.
North aisle re-uses material from original north wall including 2-centred arched
doorway and 1- and 2-light cinquefoiled windows. At its east end is a late
Perpendicular granite, 2-light window. Late C19 vestry at east end of aisle. This
and the chancel have 2 late C19 3-light Perpendicular-style window. The south wall
of the chancel has a 2-light C15 cinquefoiled window. The south aisle has all late
C19 windows. Single storey south porch has moulded 4-centred arched doorway
chamfered on the inside.
Interior : The south doorway is of granite, simply chamfered with an acute 4-centred
arch and stone seats. Restored wagon roof. The south aisle arcade has 3 bays of
granite depressed 4-centred double chamfered arches. Pevsner A-type piers with cup
capitals and bases. The north aisle arcade is an exact replica. Good tall 4-
centred tower arch whose jambs are carved with ogee-headed panels. . Chancel arch
similar to arcades. In the south wall is a piscina with an arched opening and there
is a squint from this aisle through to the sanctuary. In the north wall of the
chancel is an original pointed cinquefoiled lancet not visible outside due to the
addition of the vestry. In its south wall the chancel has a trefoil-headed piscina.
The woodwork and carving in the church date mostly from the late C19 and early C20
and the pew-ends and screen particularly are of a good quality. Samuel Hooper of
Hatherleigh was responsible for the restoration and the Misses Pinwell of Ermington
carved the elaborate screen. The wagon roofs also date from this restoration.
The tub-font may be pre-Norman and is made from a solid block of Hurdwick stone.
Some C15-C16 glass is preserved in the east window of the north aisle and the south-
west window of the chancel.
Sources: Devon C19 Churches Project : Church Guide.