A Grade I Listed Building in Bondleigh, Devon 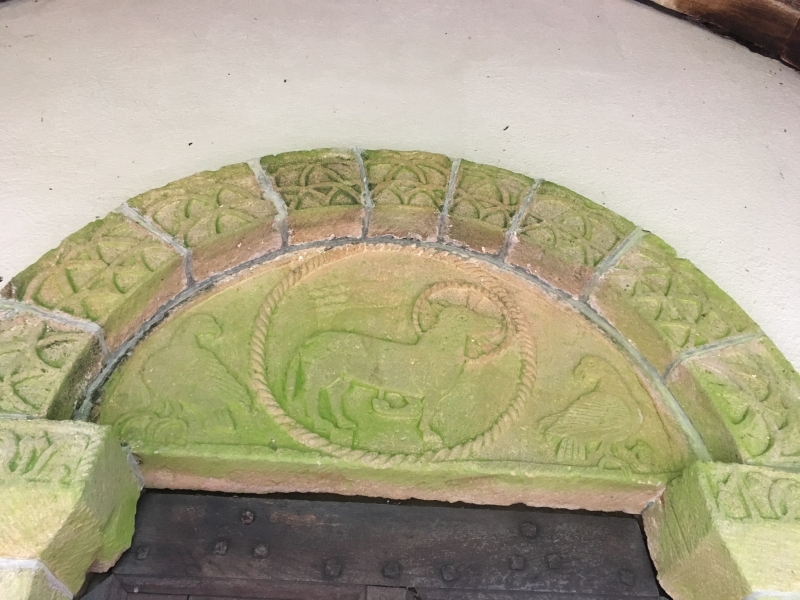 BONDLEIGH BONDLEIGH
SS 60 SE
6/11 Church of St. James
22.2.67
GV I
Parish church. C12 origin, rebuilt in C15 with C16 addition. Restored in 1890.
Local stone slate and sandstone rubble walls with some granite ashlar to the tower.
Gable ended slate roofs with C19 decorative ridge tiles and coping stones.
Plan: Nave, chancel, north aisle, west tower and south porch. The earliest part of
the Church is the Norman south doorway and the nave may incorporate some Norman
fabric. The chancel was probably rebuilt or remodelled in the C15 when the Easter
sepulchre was built on the north side. The tower and south porch are also probably
C15. The north aisle is considerably later and might even be post-reformation. The
Church was restored in 1890 when a number of the windows were renewed.
Exterior: 3 stage crenellated west tower with tapering pinnacles which have ball
finials. Set-back buttresses. 2-light segmental headed belfry openings. 4-centred
arched granite west doorway with roll and hollow moulding and arched hoodmould. 3-
light Perpendicular west window has had its tracery renewed. North aisle has 4 tall
mullioned and cross transomed windows of 3 lights with segmental heads and square
hoodmoulds. Parts of them have been renewed. At the east end of the aisle is a
late C19 Perpendicular style windows. The Chancel east window is similar but rather
more elaborate. On its south side are 2 late C19 single light transomed windows and
a narrow 2-centred arched priests door inbetween which has also been restored. The
nave has on its south side a similar single light window to the chancel and a
restored Perpendicular style window of 2-lights with a cross transom. Single storey
south porch has 2-centred arched doorway whose head has been restored. Above it is
slate sundial dated 1706.
Good interior which is less restored than the outside. The porch has its original
wagon roof with a moulded collar purlin which is supported as a re-used Norman
carved stone rams head. Good C12 south doorway in sandstone which has a circular
arch decorated with interlaced arcading enclosing a tympanum depicting the Lamb of
God flanked by a dove on either side. Decorative carving to imposts and plain stone
jambs.
3-bay granite arcade of Pevsner A-type piers and 4-centred moulded arches. Built
into the east wall of the aisle are 2 Norman capitals with ornate carving. Chancel
has good Easter Sepulchre on north wall with effigy of recumbent priest with cusped
arch and Perpendicular blind arcading above, and carved quatrefoils below. The
identity of the priest is uncertain. On either side of the east window is a
contemporary mutilated canopied image niche. Cinquefoil-headed piscina in south
wall.
Norman font has square bowl whose sides are variously ornamented standing on central
stem with 4 outer columns.
The old wagon roofs survive with moulded purlins and carved bosses - larger and more
elaborate to the aisle which also has running foliage carved wall-plates. The
chancel roof has been renewed.
Several C16 bench ends survive with unusual and varying designs. Fragments of old
glass have been preserved in the top lights of the south chancel windows and
easterly nave window.
Good C18 wall memorial in aisle to members of Marshall family with columns and a
pediment. Simpler slate memorial slab of early C18 to Mary Guss and her daughter.
The relatively simple and somewhat restored exterior of this church is compensated
for by the variety of good internal features, some of a very early date.
Source: Churches in the Deanery of Chulmleigh - Beatrix Cresswell