Church of St Thomas a Becket 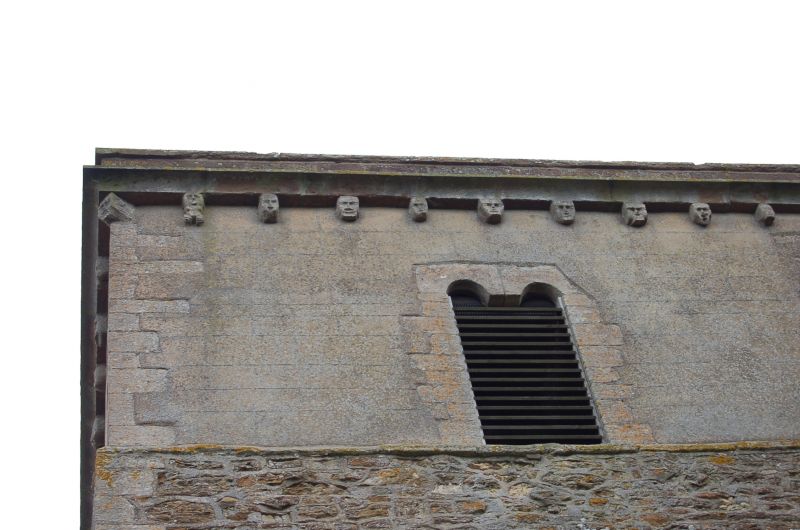 Parish Church. Partially late Anglo Saxon or Norman with much of early C14,
and a Victorian restoration which included the addition of a chancel in 1857.
Ironstone rubble with limestone dressings and Welsh slate roofs. West tower,
nave with clerestory and south aisle, chancel with south chancel aisle. Tower
of 4 stages, the lowest may be Anglo Saxon, the others Norman. Lower stages
are of uncoursed rubble, the upper stages coursed and squared. Thin pilaster
buttresses at angles. Single round headed light in lowest stage, with flat
hoodmould, and a narrow doorway to north with tiny splayed window above. A
decorated string course divides this from the second stage which has paired
round arched lights, the central shaft with chevron decoration, and with cushion
capitals, set beneath an outer round headed arch. Paired round headed lights
to bell chamber, the central mullion possibly cut through. Corbel table of
heads of men and beasts beneath flat parapet. South doorway in Victorian coped
gabled and buttressed porch, which has doorway in Romanesque style. South
door itself is C12, single shafts and simple foliate capitals support a hollow
chamfered and roll moulded arch with outer hoodmould with label stop masks.
The aisle was virtually rebuilt in 1857, buttressed and with sill course,
its windows are all Victorian renewals, to the west, in the Decorated style,
the others Perpendicular with stilted hood moulds. Paired square headed lights
also with stilted hood moulds to Perpendicular clerestory. Fragment of Saxon
or Norman masonry of main body of church in south east angle of tower and
south aisle. Round arched resited priests door of C12 in the chancel aisle
with nail head decoration to hoodmould. Tombstones built into east wall of
aisle, 4, alternately stone and slate and of C18 dates. Chancel east window
has heavily ornate Victorian tracery. North wall of chancel partly of limestone
ashlar. North wall of nave very tall with continuous sill course. Window tracery
all Victorian renewals. Blocked C14 north door.

Inside, small door only to tower. Nave arcade of 3 bays with clustered shafts
supporting double chamfered arches of the C14. Victorian nave roof with tie
beam and curved principal rafters linked by a collar. Chancel restored in
1857 and the chancel arch of this date, with delicately wrought wood screen.
Roof is of hammer beam type. The church has a fine series of monuments: on
the west wall of the nave, high up is a memorial to members of the Skipworth
family, c1558. Long inscription flanked by columns, and painted crests. Monument
of 1574 on north wall of nave to Richard Neel. A coat of arms and a well turned
epitaph are flanked by 3 clustered Corinthian columns, the central one advanced,
and these are capped by finials, with further inscriptions and painted crests
in the architrave. In the chancel, a wall memorial to Thomas Wilson d1699,
and members of his family. Blocked and fluted shafts support the pediment
and enclose the inscription. Beneath them is a shield and scroll work. Good
series of C19 stained glass windows: the earliest of 1853 is in the east window
of the chancel aisle and is armorial glass. Next come the chancel north and
east windows of 1856, and the south aisle window of 1862 depicting scenes
from the life of Christ. Western aisle window has scenes from the childhood
of Christ, 1873 and 2 north nave windows which form a pair are of 1875. Font
is probably C14. Small octagonal basin with various emblems on each face.