A Grade I Listed Building in St Buryan, Cornwall 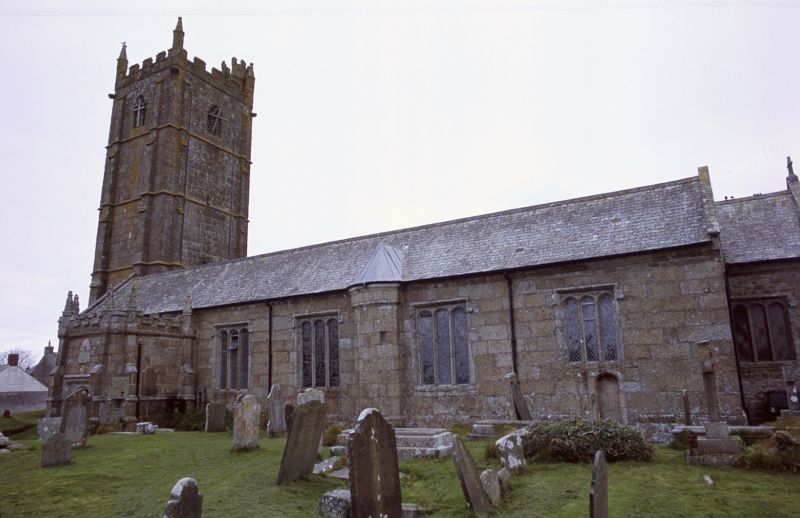 PLAN: Nave/chancel under one roof, west tower, north aisle, south aisle and south porch, all C15 or early C16 except for parts of chancel which are C12. Late-medieval (late C15 or early C16) arcades and roof structures.

EXTERIOR: Largely unaltered late-medieval exterior, with most of the original
openings. 4-centred arched north and south doorways, late-Perpendicular windows
except for the east window of the chancel and windows at east and west ends of the south aisle which are late C19 in Perpendicular style. Tall C15 4-storey embattled tower has buttresses set back from the corners; strings dividing the stages; octagonal stair tower in the angle between the north wall and north aisle; corner pinnacles; 2-centred arched west doorway; 5-light traceried window over doorway and 3-light traceried windows to the upper stage. All principal openings of the church have hoodmoulds. Circa late C15 embattled porch has moulded doorway and buttresses set back from the corners. There is a blocked priest's doorway toward the east end of the south wall of the south aisle.

INTERIOR: Lofty, mostly plastered interior with many late-medieval features including pointed tower arch carried on moulded-corbels; 6-bay arcades, with standard 'A' (Pevsner) piers and 4-centred arches, between nave/chancel and the aisle; rood stair in south wall and waggon roofs throughout. In north wall of chancel are 1½ bays of a C12 arcade with round arcade pier and respond and round arches. A later doorway which led to former chapel to the north is visible on the outside wall.

FITTINGS: C15 font with round bowl and four carved angels over central shaft
resembling the arcade piers; C15 or early C16 rood screen reassembled from fragments in 1910 and extended to its original size and with much original red, blue and green paint and gilding to the original medieval parts; two medieval bench ends and other carved fragments made into a lectern and two, probably C16, double misericords, otherwise C19 or C20 fittings.