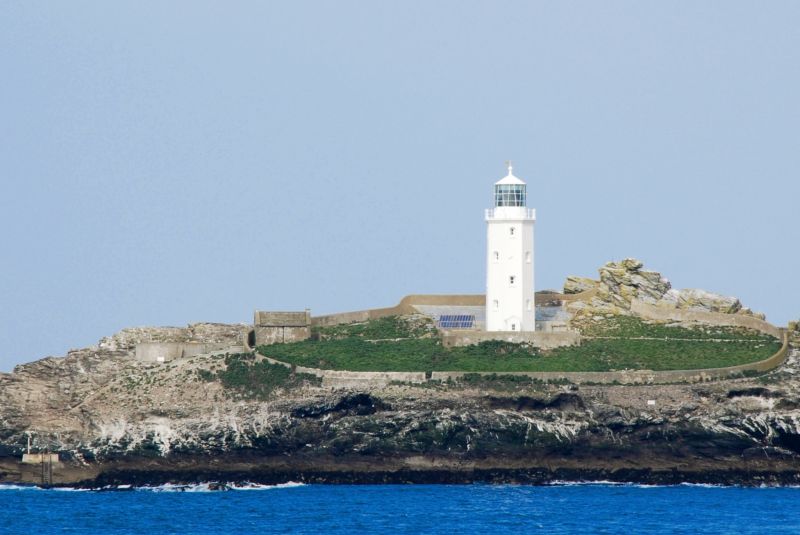 GWINEAR-GWITHIAN GODREVY ISLAND
SW 54 SE
1/20 Godrevy Lighthouse, including
- Keepers' cottages, store front
courtyard walls and perimeter walls
II
Lighthouse ; Keepers' cottages, store, front courtyard wall and perimeter walls.
1859. Designed by James Walker. Painted stucco over rubble. Cottages are
slurried rubble. One cottage has grouted slate roof.
Plan: octagonal plan.
Exterior: 5 floors plus lantern. 4 small windows to each floor arranged on alternate
faces so that there are alternately 3 windows or 2 windows to each face. Moulded
cornice to walk with iron railings outside the lantern. Braced glazing and conical
roof with finial with weather vane to lantern.
Interior: not inspected.
The cottages are small, rectangular on plan and single storeyed. Cottage nearest the
lighthouse is roofless and 1 gable end has fallen. The other cottage has coped gable
ends. Behind the lighthouse is a large store with mono-pitch roof. The lighthouse
stands on level platform with walls at the sides. Another wall encloses an
approximately oval shaped 'garden' with 3 entrances approached by steps to serve
alternative landing sites (all potentially extremely hazardous).
Before the lighthouse was built many vessels were wrecked on this stretch of coast,
notably the iron-screwsteamer NILE which was lost on 30th September 1854 with all
passengers and crew.
Situated on Godrevy Island off Godrevy Point. Godrevy Lighthouse was almost
certainly the subject of 'To The Lighthouse' (1927) by Virginia Woolf.
Godrevy lighthouse was manned until September 7th 1934, when it became automatically
activated by a 'Sun Valve' on top of the lantern roof.
Since this time the Keepers' cottages have been neglected.
Sources: S (PR) 2 46.