A Grade I Listed Building in Penzance, Cornwall 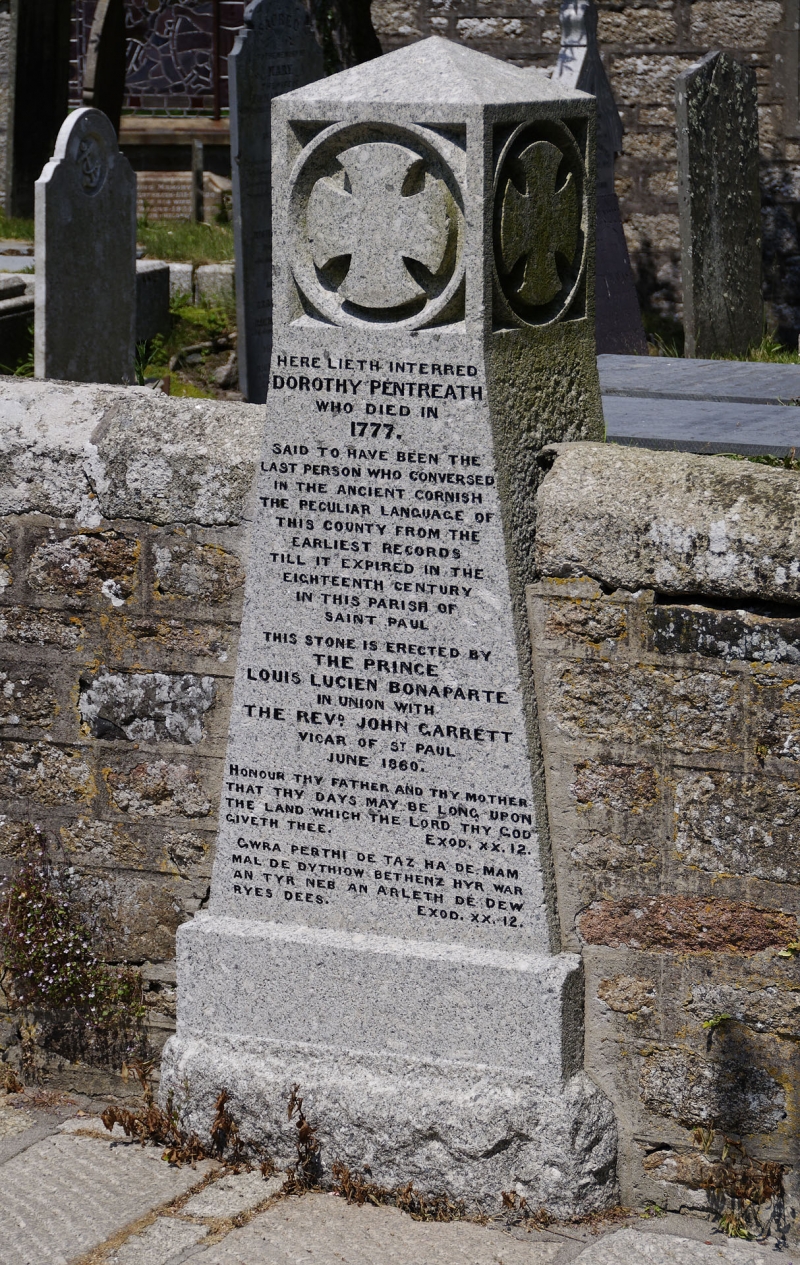 Exterior: The body of the church is long and low, in contrast with the finely proportioned three-stage tower of granite blocks, probably 15th century. The parapet is embattled, with small pinnacles and a higher north-west stair turret which has its own pinnacles. String courses at each stage continue round the slim offset buttresses. There is a west door with a four-light Perp window above, flanked by empty statuary niches. The second stage is blank except for a small slit window (west), and clock faces on each side. Three-light bell openings with a transom and Perp tracery. The south aisle has windows under four-centred arches, and a renewed Perp west window. Elsewhere, 15th century style tracery (probably of 1875), some renewed in the early 21st century because of erosion of the polyphant stone. The deep porch is, perhaps, 15th century with a Georgian slate sundial in the gable. The outer opening is two-centred, with a concave moulding. Five-light east window of 1875. The north aisle east window retains clear glass in small square panes with timber glazing bars, perhaps early 19th century. Embedded in the north wall, near the east end, a Saxon cross-shaft with incised scrolls and knot patterns. Also in the north wall, a Perp doorcase with square frame and triangular sinkings in the spandrels; evidence that the outer walls survived the fire of 1595 to a significant degree. The roof timbers, slates and leading were almost completely replaced c. 1986-95, under David Scott.

Interior: The fine doorframe of the inner south door is early 16th, with a four-centred arch, square label, and cusped traceried spandrels. To its right, a small stoup, reinstated c. 1950 with a medieval corn measure as a bowl. The interior is broad and light, although quite low, with white-painted plaster vaults over nave and aisles (barrel vaults and cornices replaced c. 1986-95). The arcades are strikingly long; nine arches running to the east wall without a break. The openings are wide and low, with double chamfers. Octagonal piers with flared capitals. The only irregularity is in the north arcade, next to the pulpit, where a narrower arch and part of a fire-blackened Perp pier with shafts and ringed capital indicates the survival of part of the pre-1595 structure. In the south aisle is a restored medieval piscina.

Monuments: Capt. Stephen Hutchens d. 1709; a fine Baroque tablet with black Corinthian columns, flat entablature topped by two putti and a flaming urn, scrolls and trophies flanking the inscription, and sailing ships in the base. It includes verse in Cornish. A smaller Baroque cartouche with swags commemorates Capt. Andrew Elton of Rotherhithe, d. 1710, killed in a naval engagement with the French off Land's End. In the north aisle, a memorial to the lost crew of the Penlee Lifeboat, 1981; a large block of granite topped by a lantern containing a crystal chalice.

History: The first record of Paul church is in 1259; shortly afterwards, it became the property of Hailes Abbey, Gloucestershire. On July 23, 1595 raiders from four Spanish galleons attacked Mousehole, Newlyn and Penzance, and set fire to Paul church. The tower, south porch and parts of the aisle walls survived; the interior, arcades and roofs were rebuilt by c. 1600. Pieces of fire-damaged piers remain in the north arcade. A grant application to the Incorporated Church Building Society for re-seating was rejected in 1862 (architects Salter & Perrow). J.D. Sedding restored the window tracery and perhaps did other work in 1875. The medieval dedication to St Paul may have referred to any of three saints; most historians favour St Paulinus of York, while local tradition favours a Welshman, Paul Aurelian (later canonised at Leon in France and known as St Pol de Leon). This dedication was applied c. 1907 as part of a revival of Cornish culture.

Reasons for Designation: The church of St Pol de Leon, Paul, is designated at Grade I for the following principal reasons:
* A Saxon cross shaft in the north wall, and a cross head in the church yard wall, provide significant evidence of Paul's pre-Conquest origins.
* The tower, porch, and probably much of the outer walls are substantially 15th century, and possess great character.
* Interior, roofs and nave arcades much rebuilt after a Spanish raid in 1595, an unusual date for church architecture anywhere in England.
* Splendid village setting on a headland above Newlyn and Mousehole, embodying many aspects of medieval Cornish churches
* Careful C19 restoration under the direction of the noted architect J. D. Sedding.