A Grade I Listed Building in Chelmsford, Essex 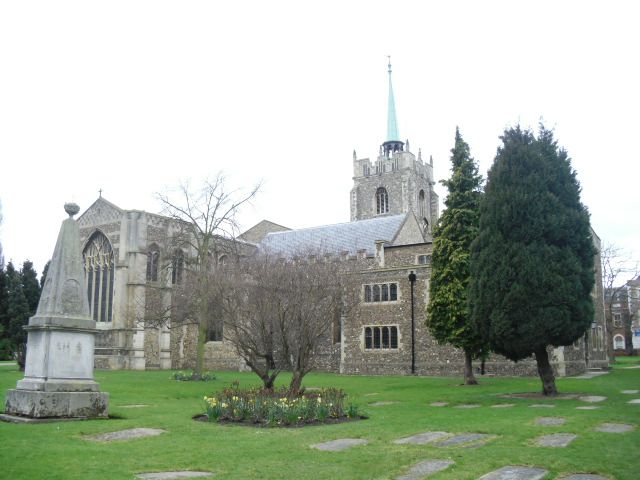 The church was wholly rebuilt in the C15, at which date it comprised an aisled nave, chancel with N and S chapels, a W tower and S porch. The spire was rebuilt in 1749. The nave collapsed in 1800 following excavation in the vaults, and was rebuilt by John Johnson. Chancel and S chapel restored by Frederic Chancellor 1862, who also designed the N transept and outer N aisle added in 1873. Chancel E window and clerestory by A W Blomfield, 1877-8. There was further restoration by Chancellor in the 1880s. The two E bays of the chancel were added in 1926-8 to designs by A K Nicholson. The large complex of vestries and the original chapterhouse were added in 1929, also to designs by Nicholson. A new chapterhouse was built elsewhere, and the chapterhouse converted to a song school in 1990, and the whole complex was refurbished in the early C21 by Andrew Murdoch of Fitzroy Robinson.

MATERIALS: The medieval and the later C19, C20 and C21 work is mainly flint rubble, but has some handmade brick, with stone dressings, decorative stone banding and much flint flushwork. Early C19 stock brick nave and S aisle, the S clerestory and S aisle ashlar faced. Some Coade stone also used for details in the early C19 work.

PLAN: Nave with N and S aisles, S porch and W porch. Chancel with N and S chapels. Large song school (formerly chapterhouse) and vestry complex attached to the chancel on the N.

EXTERIOR: A large, late medieval town church greatly extended and restored in the C19 and C20.

Two-storey C15 S porch with very fine flint flushwork said by Pevsner to be 'among the best in Essex'. The embattled flushwork parapet on the porch, and continuing onto the aisle, is similar to that on the tower, and the sides of the porch have pinnacled arcades among other motifs. The outer S door is Tudor-arched in a square frame with carved spandrels and a vaulted niche above. Tudor-arched inner doorway and staircase of 1956. The porch ceiling has tracery panels.

W of the porch, the S aisle is partly flint, partly handmade brick and has brick banding. The S aisle E of the porch as rebuilt by Johnson in the early C19 and is ashlar faced, as is the clerestory above it. The aisle and clerestory window tracery is Coade stone. The E gable of the nave, and the N clerestory are stock brick, also by Johnson. The C15 S chapel has two C19 square-headed Perpendicular-style windows separated by a restored C15 door with an ogee label. The SE buttress is topped by a figure of St Peter wearing fishing boots and carrying a modern key by Thomas Huxley-Jones of 1960.

The chancel clerestory, on the medieval chancel, is 1877-8 in Perpendicular style by Blomfield. It has 6 windows on the S; those on the N are internal and are blocked to allow for the N transept. The projecting eastern section of the chancel was added in 1926-8 in a C15 style, but it has plain, almost flat, buttresses topped by small gables that are characteristic of Nicholson's style and distinctly C20. It is slightly higher than the medieval chancel and has matching clerestory windows and a chequered parapet. The Perpendicular-style E window, which was enlarged from 3 lights to 5 by Blomfield, was reused by Nicholson.

The N side of the chancel is dominated by a large, two-storied complex of vestries, former chapterhouse and song school in flint with Tudor-style windows. These lead off the N transept added in 1879 by Blomfield. The core was built to designs by Nicholson in 1929, with additions of Andrew Murdoch of 2003-4. The C19 outer N aisle is shorter at the W than the inner N aisle, and has 3 large, late Perpendicular-style windows in square frames and a N door with a gabled hoodmould. The W bay of the inner N aisle is mixed flint and early brick, and has a window similar to those in the outer N aisle.

INTERIOR: 4-bay nave arcades with lozenge-shaped piers and fine mouldings, C15 in origin but much rebuilt in the early C19. The S arcade piers are Coade stone above the bases. The outer N aisle by Chancellor is similar, but has bolder capitals. The Tudor Gothic nave ceiling (painted and gilded in 1961 by Stephen Dykes Bower) is by Johnson, and has rose-window roundels. The ribs are supported by female figures between the windows. The nave aisle roofs are 1899, and are based on C15 fragments. A small balcony above the S door leads into the upper chamber above the S porch, added by Chancellor.

Tall C15 tower arch. The tower is enclosed within the W end of the nave and the N and S sides of the tower open into bays continuing the aisles. C15 chancel arch with slender octagonal shafts on the responds. The 3-bay chancel arcades are early C15, but differ from N to S. On the S side, 3 bays with depressed arches, but on the N the western two bays, leading into the N transept, are enclosed within a large, round outer arch and have pierced tracery infill in the spandrel. The eastern arch is separated from the others by a length of walling. A C15 arch leads from the N transept into the NE chapel. The N transept window is blocked but retains its tracery. C19 hammerbeam roof in N transept. The C20 chancel extension projects beyond the chapels. C19 arch-braced chancel roof on posts descending to a string course below the clerestory; the C20 sanctuary roof is similar but has also has collars and stone shafts descending to the floor. The whole was painted and gilded by Stephen Dykes Bower in 1957.

PRINCIPAL FIXTURES: Refurnished and reordered in 1983-4 by Robert Potter, when many C19 and early C20 fittings were removed. Fittings of this date include Westmoreland slate font on a bronze base and Westmoreland slate altar designed by Potter; Westmoreland slate cathedra by John Skelton; screens to NW and SW chapels, and steel and bronze ambos by Guiseppe Lund. Multi-coloured silk patchwork hanging of 1982 by Beryl Dean under the E window. Light oak choir stalls of 1957. On blocked N transept window, painted Tree of Life by Mark Cazalet, 2004. Sculptures include a Pieta (The Bombed Child) in the SW chapel by Georg Erlich, Christ the Healer in the NW chapel also by Erlich, Madonna and Child by Peter Ball, and Christus by Thomas Huxley-Jones. Above the chancel arch, Christus Rex also by Ball.

Very good C19 and C20 glass. E window of 1859 by Clayton and Bell, enlarged in 1878, also by Clayton and Bell two windows in former S chapel. In the S aisle W of the porch by Henry Holiday, 1905-6. Chancel clerestory windows by A O Hemming, 1906-7. Four windows in the nave by A K Nicholson after 1927, W window of SW chapel also by Nicholson as a war memorial, and the E window of the N (Mildmay) chapel by A K Nicholson studios, 1950-1, replacing bomb-damaged glass. Figure of St. Peter by John Hutton, 1969.

Some good monuments, including in the N transept, Thomas (d.1566) and Avice Mildmay (d.1557), erected 1571, an unusual standing wall monument with an ogee head with strapwork. The base has three panels, with the husband and sons, in one, the wife and daughters in another and their arms in the centre. In S chancel Chapel, Matthew Rudd (d 1615): incised mural slab, attributed to Francis Grigs, with an upright skeleton between the figures. In the NE (Mildmay) chapel, Earl Fitzwalter (Benjamin Mildmay), d.1756, a large standing wall monument with a large urn in a pedimented niche flanked by cherubs and Corinthian columns of Siena marble, signed by James Lovell. In the chancel, a standing figure within a C17-style niche (all in limestone) to J E Watts-Ditchfield, d.1923, first bishop of Chelmsford, by John Walker. S chapel, Mary Marsh, d. 1757, attributed to Henry Cheere, also J P Tindal, d. 1797 at the Battle of Camperdown on board HMS Monarch, shown in relief at the base of the slab. In the nave, Evelyn, Lady Rayleigh, d. 1934 by C d'O Pilkington Jackson. In the outer N aisle, Robert Bownd, d.1696, a fine wall tablet with Ionic columns, flaming urns and flower garlands.

HISTORY: St Mary's was the parish church of Chelmsford, and is said to have been founded at the same time as the town c.1200. The church was wholly rebuilt in the C15, probably in several phases, and all traces of any earlier work are lost. It was damaged during the Civil War, when the E window was smashed. It was restored and enlarged in the C19 to meet the needs of Chelmsford's growing population. In 1914 it became the cathedral of the new diocese of Chelmsford. Various schemes for enlarging the new cathedral were proposed, and the main additions were the complex of vestries, including former chapter house to the N and the enlargement of the chancel. Sir Charles Nicholson's work is a notable episode in his important career. The cathedral was refurnished in the early 1980s to meet changing liturgical needs that demanded more flexible liturgical space. In 1990 a new Chapter house was built on a different site, and the former chapter house adjacent to the N transept was concerted into a song school.

REASONS FOR DESIGNATION
The Cathedral Church of St Mary the Virgin, Chelmsford, Essex is designated at Grade I for the following principal reasons:
* A fine medieval town church with excellent flint flushwork on the porch and tower, greatly extended in the C19 and C20.
* Very high quality C20 fixtures, reflecting its elevation to Cathedral status in 1913 and subsequent ongoing development.
* Extensive survival of Georgian restoration (especially to the nave roof): of high quality and an unusual survival.
* Of high interest for the successive phases of restoration, showing evolving approaches to church renewal, and continuing the development right up to modern times.
* The church enjoys very strong townscape value, and forms the core of historic Chelmsford.
* Very good C19 and C20 glass.
* Very good monuments.