A Grade I Listed Building in Breadsall, Derbyshire 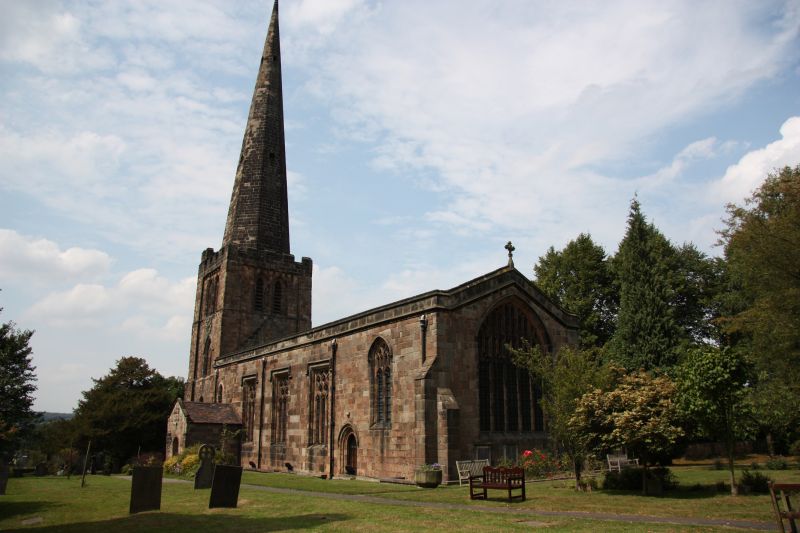 PARISH OF BREADSALL
CHURCH LANE (east side)
Church of All Saints

C13 tower of four stages divided by chamfered string courses. Chamfered plinth. Clasping buttresses rising to crenellated parapet on corbels. West doorway of two chamfered orders and with colonnettes. Restored in C19. Plank door with elaborate wrought-iron work. Blocked triangular-headed lancet above. Above again is a paired two-light window within a single chamfered arch. Hoodmould with dogtooth. Large paired lancet bell-openings above two plainly chamfered orders. The north side has a double-chamfered lancet, a single chamfered lancet above and bell-openings as to the west. To the south is a paired two-light window within a single chamfered arch, as to the west and paired lancet bell-openings as to the west. Similar bell-openings to the east, and below, the roof line of the C13 nave. Early C14 octagonal stone spire with two tiers of tiny lucarnes. On the south side the nave and chance are in one. Parapet with moulded string course and coping. Gabled south porch with a lancet to east and paired lancets to west. Plain round arched doorway with studded plank door. To the left is a C19 round-arched window. To the right are three large square-headed C14 windows with reticulated tracery set in double chamfered surrounds. Returned hoodmoulds. Priest's doorway with hollow and roll mouldings, and hoodmould. Two-light Perpendicular style window with hoodmould on pendant stops. Angle buttresses at the east end. Large five-light Perpendicular east window, renewed by Caröe in 1915. Hoodmould with pendant stops.

INTERIOR: Broad C13 tower arch of three chamfered orders with moulded imposts. C13 three-bay north arcade with circular piers, octagonal capitals with nailhead decoration, keeled responds and double chamfered arches. Squint between north aisle chapel and chancel, and above it is remains of the rood stair. The north aisle has a blocked arched recess with roll moulding. Late C14 wooden sculpture, a pieta probably of German origin. In the chancel, triple sedilia with cusped ogee arches and shields in the spandrels above. Piscina with a tall pointed arch. The roofs are of a high quality Perpendicular style, dating from the 1915 restoration. Castellated and moulded tie beams on angel corbels, tracery above.