A Grade I Listed Building in Lode, Cambridgeshire 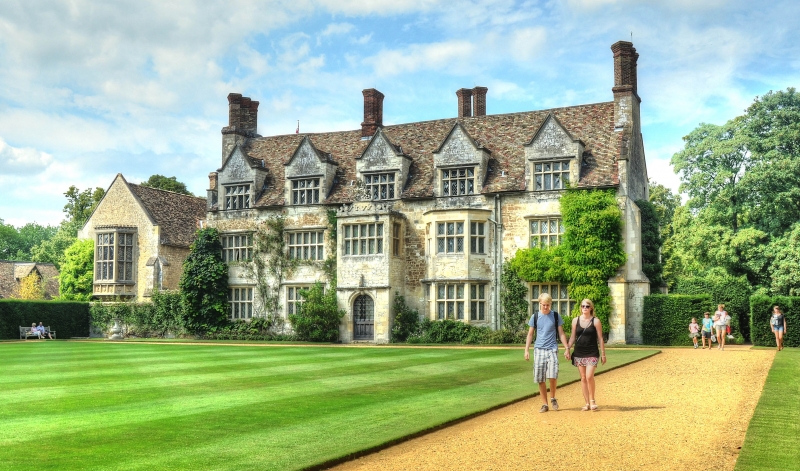 Country house incorporating part of a priory of Augustinian
Canons. C13 origin, converted to a house C17, enlarged C19 and
C20 (part by Sir A Richardson). Limestone and clunch with
steeply pitched, tiled roof. Two main ranges forming a T-plan.
The range to the North was originally a first floor hall with an
undercroft, and detached from the South range. It was probably
the Abbots Lodging. The original building has been added to on
the North and South. The gable end walls are visible
internally. At the left hand of the East wall the surface has
been cut back indicating an extension or range on the East
side. The walls are of coursed clunch with some Barnack
limestone particularly in the lower courses. On the East wall
there are two, two-stage buttresses. The upper stage has been
rebuilt but the lower stage of clunch and Barnack on a splayed
sill is C13. The upper part of the walls has been rebuilt and
the steeply pitched, tiled roof is C19 or C20. The West wall is
obscured by later building. The lodgings were of three bay
plan, and of two storeys and an undercroft. The original entry
was on the West side at the North end. The present fenestration
is C17 or dates from the restoration in C19 or C20 but there is
a two centred arch and the springing for a second arch at ground
floor which are C13. The South range is also C13 in origin and
of clunch with some Barnack but its original use is uncertain.
In the early C17 it was converted to domestic use probably by
the Fowkes family, and the present external appearance is
generally of a house of that period. The roof is steeply
pitched with later end parapets, but early C17 end stacks of
clunch and reused Barnack limestone. The shafts set diagonally
on the base are all later. Two storeys and attics. Five C20
gabled eaves dormers in style of and replacing five similar
dormers. The main elevation is in five bays, each with a five
light cross frame casement of clunch or restored in limestone,
except for the centre bay which has an early C17 two storey
porch. The doorway is in a round headed and double wave moulded
arch on a high sill with a renewed, jewelled keyblock at the
centre. Above is a reset medieval carving of stone and a
similar casement window. Surmounting the porch is a pediment of
"C" and "S" scrolls on either side of a late C18 Coadestone
sculpture of St George and the Dragon. To the right hand is a
two storey canted oriel window with cross-frame casements of
clunch. In 1955, a gallery was added to the end of the Abbots
lodging or North range. This was designed by Sir Albert
Richardson. The interior of the North range or former Abbots
lodging contains two features of importance. The first is the
undercroft which is in three bays and two aisles with
quadripartite rib vaulting with chamfered arches springing from
octagonal columns with moulded capitals and hold water bases.
At the walls the arches spring from triple lobed corbels. Much
of the stonework, including the marble columns, has been
renewed. The second feature is on what was formerly the South
West external wall. It is part of the raking wall arches to
what was the staircase entry to the first floor hall. Only four
and a half two centred arches of triple hollow and roll moulding
with a continuous roll moulded label survive. The arches spring
from corbels which have been badly mutilated. The South range
contains little internally even from the 1600 alterations. A
doorway to the South porch has a reversed arch with spandrels
carved with "PW" and "R" for William Reche, prior from 1515 and
probably reset. The fireplaces and surrounds are mostly early
C17 and inserted during Lord Fairhaven's ownership. The roof is
of c1600 and of staggered, butt purlin construction. The priory
was founded in early C13 on the site of a c12 hospital of St
Mary. Much of the priory was dismantled after the dissolution
but one range was converted to a house in early C17. The house
was acquired by Lord Fairhaven in 1926 who added some of the
buildings on the West and the Gallery on the North.