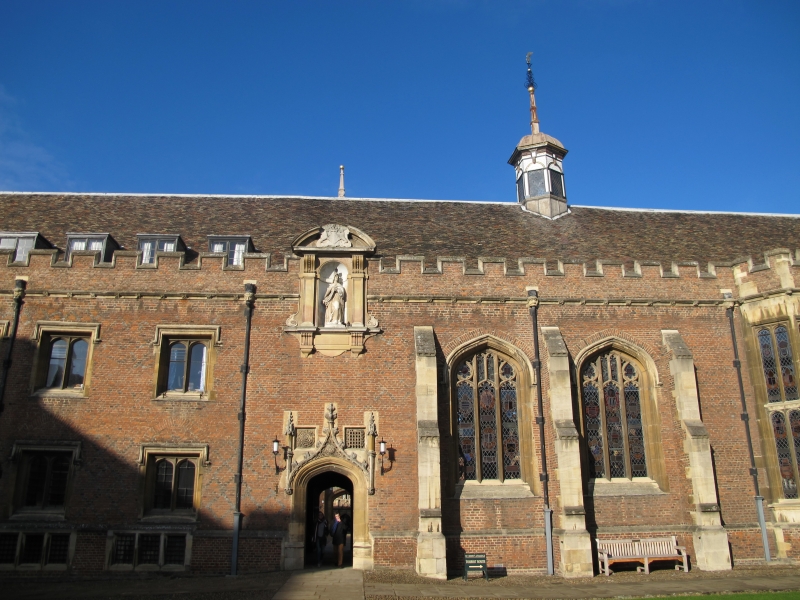 ST JOHN'S COLLEGE
1.
942
The Buildings surrounding
the First, Second and Third
Courts
TL 4458 NE 3/282 26.4.50.
I
2.
First Court
East Range with Gatehouse 1511-16. Red brick with dressings in freestone
and clunch. The Gatehouse is of 3 storeys, it was restored and partly
reconstructed in 1934-5. Embattled parapet and angle turrets. Original
windows. Oak doors of circa 1516. Much carved decoration. Moulded 4-canted
arch. The Gatehall has a 2 bay fan-vault, the room above some re-set C16
and later linenfold panelling. The range North of the gate is of 2 storeys
and attics and has some contemporary interior features. South of the gate
is similar, but the Junior Combination Room has several features of interest.
The Chapel 1863-9. By Sir Gilbert Scott. In the C13 Gothic style. Ancaster
stone. Very tall Nave and tower. Apsed East end to St John's Street divorced
from the East range of First Court, but joined by a wrought- iron screen
(qv). Tower of 3 stages with an open arcaded belfry and pinnacles above.
The interior has an antechaple, and the main chapel is of 5 bays with an
apsidal end. There are a number of fittings and monuments from the old
chapel, including some C15 and C16 brasses. Some C15 glass, the rest by
Clayton and Bell, Hardman, and Wailes, all circa 1869. Brass eagle lectern
1840. Seated marble statue of James Wood by E H Baily RA 1843. Stalls
of 1516 with carved misericordes.
West Range 1511-16. Red brick with embattled parapets. The north part
of the range was extended in 1863-5 by Sir Gilbert Scott. The brickwork
was refaced in 1935. The Hall roof has an hexagonal louvre of 1703. The
West and East fronts of the range are similar except that the C19 extension
is not visible from the West. Internally the Hall is of eight bays (formerly
five) with a fine hammer-beam roof. The Hall is lined to cill-level with
linenfold panelling of 1528-9, extended in 1863. The five-bay screen is
original, but much restored. The heraldic glass is of all centuries from
C15-C19. The Butteries and Kitchen form the rest of the range, there are
beams exposed, and some C18 panelling.
South Range 1511-16, but raised one storey and refaced in ashlar by James
Essex, 1772-6. Three storeys, band at first floor level, sash windows
with architrave surrounds, pedimented doorcases, slate roof. The internal
arrangements have been considerably altered.
Second Court Begun 1598, contracted by Ralph Symons and Gilbert Wigge.
Red and yellow brick with Northamptonshire stone dressings and slate roofs.
Two storeys and attics.
North Range Ten bays. Lead rainwater heads dated 1599. Internally there
is some C17 and C18 panelling. The Combination Room (originally the Master's
Gallery has a plaster ceiling of circa 1600 by Cobbe. The walls are panelled
throughout, divided by fluted and enriched Doric pilasters. Two fine fireplaces,
one from the old Red Lion Inn. The ceiling continues in the small room
on the West which is lined with mid C18 panelling. The West staircase
is of 1628 and has walls of contemporary panelling. One attic room has
panelling of circa 1600, the rest is C18.
South Range This consists of sets of rooms and the Kitchen offices. The
interior has features from different periods, original panelling of circa
1600; staircase and panelling from the mid C18. Cupboards and other fittings
from circa 1600.
West Range Externally similar to the other ranges except for the central
gatetower, the Shrewsbury Tower. Three storeys with angle turrets and
battlements. The archway has a four-centred head with label, the arms above
are of 1671. The gatehall has a panelled stone vault in two bays. The
room above has early C18 bolection moulded panelling; above that plain
C18 panelling. The rest of the range has some original internal features,
including panelling and fireplaces.
Third Court
North Range including the Library. 1623-5. Red and yellow brick with
freestone dressings. Ten bays. The ground floor has two four-centred
lights to each bay, the first floor, which is the Library has two cinquefoil
ogee lights in a traceried head to each bay. The North wall has five double
bays separated by buttresses, the windows are similar. The river front
has a two-storeyed three sided bay window, and is dated 1624. Internally,
the ground floor has no ancient features, it was adapted for Library use
in the C19. The Library has a ten bay roof restored by James Essex in
1783, and reconstructed 1927-8 the bookcases have been altered and are
partly Jacobean and partly C18. The panelling is C17. The West window
has heraldic glass of 1850.
West Range 1669-73. Red brick with stone dressings, slate roofs. Three
storey and attics. The East front has an projecting centrepiece with an
open arcaded walk of six bays on either side. The centrepiece is of three
stages with a Tuscan order. The arcading is ashlar with Tuscan pilasters.
Two-light windows. The river front is in five bays divided by chimney
projections. Rainwater-heads are dated 1672 and 1799 the main foundations
were strengthened in 1777 and 1841. Shaped gables surmounted by finials.
Internally the staircases are original and there are several rooms with
original panelling and other features.
South Range l669-73. Three storeys and attics. Eight bays. Dated 1671
on the river ront and on a rainwater head. Two four-centred lights in
each bay. The interior of the range contains many original features including
beams, fireplaces and panelling. There are also C19 features. (RCHM).