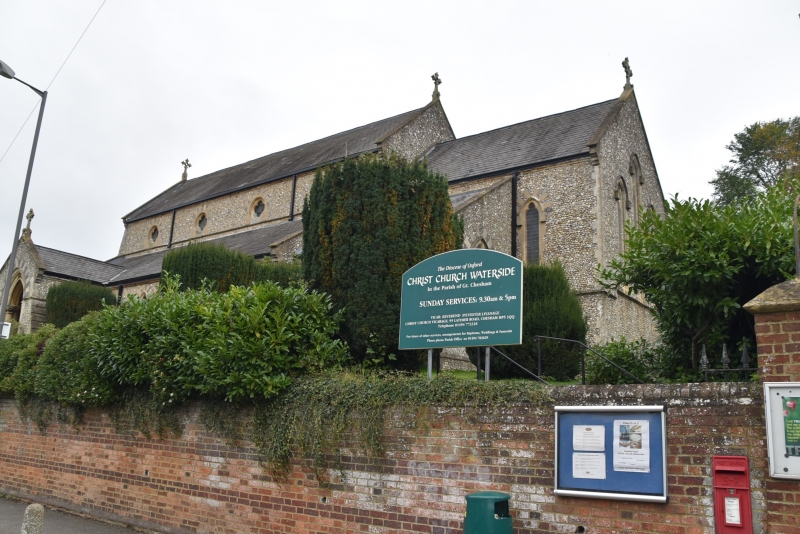 MATERIALS: Flint facing with limestone dressings. The arch heads have voussoir-like treatment of flint alternating with stone. Red brick to the parish room, the entrance to which on the S is flint-faced with red-brick dressings. Slate roofs to the church; flat roof to the hall etc.

EXTERIOR: The church, built in an Early English style is sited in a commanding position on a steep, S-facing slope overlooking the road and the River Chess. The four-bay nave is tall and has clerestory windows of quatrefoiled circles. The lean-to aisle has small lancet windows on its S elevation and a two-light plate-tracery window at the W end, a design which is repeated at the E end of the chapel. The E wall of the chancel has three graded lancets. These have hood moulds with uncarved blocks for head-stops: similar uncarved blocks recur elsewhere as in the stops to the hoods over the S doorway and W windows. The latter consist of two lancets with a recess for a bell between. Above is a large circular window with six quatrefoils set within the perimeter. The porch has semi-circular responds to the outer arch and a heavily moulded head. There are gable crosses at the end of each gable.

INTERIOR: The interior walls are plastered and whitened. The most striking feature of the interior is the considerable height of the nave which is covered by a roof with arch-braced trusses which have large bosses at and longitudinal arch-braces between their apices. The nave is divided from the aisle by an arcade with steeply pointed double-chamfered arches and round piers with moulded capitals and bases. The chancel arch is very tall and the arch rises from a shaft carried on a foliate corbel. The lean-to aisle roof is arch-braced and has heavy pierced timbering in the spandrel beside the arcade. The N wall of the nave has small lancets which mirror those in the aisle S wall. There is Victorian stained glass in the E windows of the chancel.

PRINCIPAL FIXTURES: The stone pulpit is a robust circular design with bands of dog-tooth ornament at the top and bottom of the main drum and small carved quatrefoil details in its centre portion. The font too is circular and has unusual petal-like decoration on the bowl and a series of gablet-type features surrounding the base creating a serrated profile. The pews are simple and have an L-shaped profile to their ends; many survive but there has been extensive clearance at the W end and also at the E. The chancel fittings late C20.

HISTORY: Christ Church was built in 1864 to meet the needs of Anglican worship in this part of Chesham. An appeal for funds to the Incorporated Church Building Society notes, `The Parish of Chesham is an immense one...The people are for the most part extremely poor.' It was built in the style of architecture of the C13 which enjoyed great popularity in the mid-Victorian period. The church was never completed as originally intended and Brandon's plan (ICBS) shows the intention to have a NW tower and N aisle - hence the Spartan nature of the external N wall from which the windows would have been reused in a projected N aisle to give the same articulation as in the S aisle. Further evidence that money was tight is in the uncarved stops to the hoods over doors and windows. When consecrated on 8 August 1864 by the bishop of Oxford the church had 336 seats, the majority of them free. An ICBS file of 1905 has a letter from the well-known church architect G H Fellowes Prynne about a new aisle and choir and clergy vestries but nothing came of this. The area to the NW of the nave was finally used in 1986 to provide a parish hall, a scheme which wraps round the NW corner of the 1860s church to provide an entrance area, kitchen, toilets etc.

REASONS FOR DESIGNATION:
Christ Church, Chesham, Buckinghamshire is designated at Grade II for the following principal reasons:
* It is a mid-Victorian church built in the Early English style whose main fabric has been little altered.
* It has some original fittings of quality and interest.